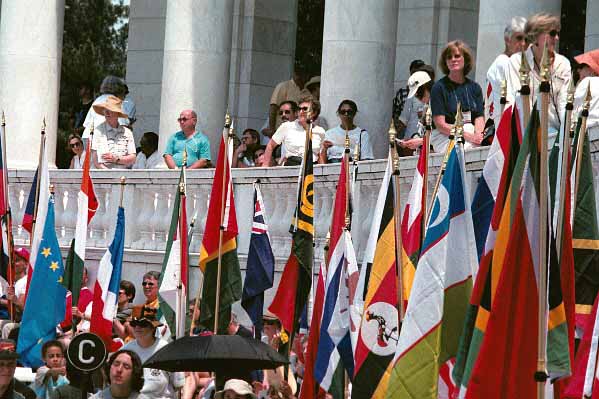 My Reflections on the Conference Experience

I arrived In Washington, D.C. with anticipation. The only other NPCA National Conference that I have attended was when the SDPCA was the host association for the 1997 annual conference. At that conference I did not have the opportunity to link up with any of the people with whom I served in 1962. Would this conference be any different? Would I see and visit with those that I trained and served with after 40 years? Life is replete with change; what changes have occurred for those of us who, in our budding youth, latched on to a program espoused by the then president, John F. Kennedy?

The SDPCA and the One World, Our World School Program sponsored an event that took place on Friday, March 1, 2002 in San Diego's Balboa Park. RPCV Stephanie Palau was going to embark on a cross-country bicycle ride promoting recruitment for the Peace Corps, the Third Goal of the Peace Corps and being an Ambassador of Goodwill and Peace. I participated in that particular sendoff. I was further honored by having the opportunity to formally welcome Stephanie to Washington during the NPCA Zoo Fest Conference event held at the Smithsonian National Zoo on Saturday, June 22. It was poignant to be present to greet her for SPDCA, from which she originated, upon the completion of her almost 4,500 mile trek.

As I readied my introduction to welcome Stephanie (at left ,photo by Hank Davenport), a man approached me and presented himself in a most animated way: it was Tim Fisk, face bright with enthusiasm, surprise and joy. We had trained together in Boston and Puerto Rico! I rushed to go on stage and welcome Stephanie with much apprehension: I didn't want Tim to disappear for another 40 years! Sensing an internal frustration that I wouldn't, among the 1,700 RPCVs present make further contact with my past, I seized the opportunity while at the microphone to cry out to the masses of RPCVs gathered that "I was here, where were you?"

Upon voicing that appeal, and with Stephanie exiting after having been acknowledged for her wonderful and courageous achievement, another man, wearing the widest grin on his face that I have ever seen, came running up to stage right. It was Ron Inskeep, my first roommate in PC service while stationed in the small town of Izcuchaca, 25 kilometers from the central Andean City of Cuzco!

As my spirit soared with these two friends and later with Ron's wife, Judy who also served with us in Cuzco, the years melted away. I saw them as they were at that time, 40 years ago, fresh, vibrant, glowing, youthful and comparably innocent. Afterward, through catch-up conversations and sharing, the reality of time set in and the 40 year gap became evident to me. They all stated that I hadn't changed. Yet I knew that we all have changed (haven't we?). With anecdotes flying our times together in service were recaptured as clearly as if we were living them again.

It was evident to me that during those precious moments of reconnection there was a necessary catharsis for all involved. Questions that remained unanswered for 40 years were resolved. The circles that remained incomplete for so long were finally whole. New circles of life were started by offers of renewed, mature friendships and genuine gestures of hospitality. Coincidences abounded as we excitedly (and cryptically--few words were needed) related in moments our lives for the past 40 years. It didn't seem to matter, for the common bond we shared then was the bridge that allowed us to accept each other now as we are and to move on, almost with reckless abandonment, little care given to details.

The air was jovial, intense, exhilarating with the release of soul-friends reconnecting, as we touched each other in reassurance with our eyes, voices and hearts. Subsequently, I met up with others: Bob and Judy Blomberg and Jim Bass. Bob and Jim had also been members of our training group. At the Parade of Flags gathering alongside the Lincoln Memorial, another man introduced himself as Mike Dixon. He recognized me as one of his trainers at Cornell University, a position that I took after my volunteer experience.

Was our Peace Corps experience such an arduous, adventurous one? Was it so life-changing that our being together in this manner was the final proof that all the quiet power we thought we'd perceived really did occur? Or is it just a simple case of convoluted camaraderie, born of individual desire to have an opportunity to make a difference. We each had an individual desire to make a difference in a grand way. Yet not one of us chose to continue our connection. Yet somehow, in the magical world of shared experience we were together again in one brief weekend as if the aftermath of our Peace Corps aspect of our lives never separated us.

On flying home, I mused over the weekend's events. It occurred to me that I was able to reunite generationally with those I had trained with, served with and later trained! I realized how blessed I was and am, for we are now continuing the experience and have been in contact since the conference. As usual for me, life is a series of circles. During our journey, we will experience the completion of some, although not all, of these circles. I am so grateful that some of the Peace Corps circles of my life that were incomplete are now whole. I now quietly wonder whether our 40 years of memory and unforgotten attachments, rooted in such unique camaraderie, are similar to those who serve in other life-changing experiences: wars, natural disasters, major soul-shifting events.

This story has been posted in the following forums: : Headlines; Fortieth plus one; NPCA