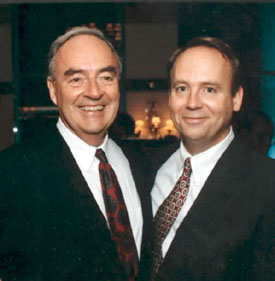 Dan Wofford, the Democratic candidate for Pennsylvania's 6th Congressional District, did not have your typical childhood.
As the son of Harris Wofford, who would later become a U.S. senator, his earliest memories are of his father serving as an advisor to Martin Luther King Jr. and President John F. Kennedy during the civil rights movement.

"It was like having a front row seat of history in the making," said the 47-year-old Wofford.

"It was an unusual childhood -- my dad and mom were always willing to take on important and challenging missions," Wofford said. "We were in the thick of the changes under way in the country.I didn't think about it at the time, but I was very impressionable. It only helped to reinforce what my parents had taught me: that great goals are worth fighting for."

When his father was asked to run the Peace Corps in Africa, Wofford traveled to Ethiopia at age 7. For two years, he attended an English-speaking school where he was virtually the only American and where a strict discipline code sometimes meant corporal punishment in the form of getting your knuckles rapped or having a bean bag thrown at you.

Although it was difficult to adjust to, Wofford was able to travel across Africa with his father, taking in different cultures and environments.

"As a youngster, you're just taking it all in, but it gave me the chance to see a world which was very different from the U.S. Not only places where there is tremendous poverty, but also a different culture," he said. "As I grew older, I really began to appreciate the impact it had on me.The Peace Corps is about making a difference and serving people, but in a sense, it is also about taking calculated risks and challenges."

Now Wofford, who has lived in southeastern Pennsylvania for 30 years and now lives in Charlestown in Chester County, said it was time for him to take another calculated risk in running for the new congressional district that stretches from the edge of Philadelphia all the way to Reading.

"I come from a family that honors public service and nonelected service and I think voters look for candidates -- Republican or Democrat -- who recognize the challenges we are facing and recognize the world has changed," Wofford said."They want someone who takes the responsibility of leadership seriously.People are not satisfied with the way things are going in Washington and Harrisburg.They want people in office who are going to address the challenges from corporate responsibility to getting our economy turned around."

The experience has convinced him he could make a difference for residents in the district.

"This was a real opportunity to serve people in a new way," Wofford said.

"My opponent has suggested that I don't have a record because I haven't been elected, but there are many ways people can serve the country and community," Wofford said."I bring 20 years of experience and a record of serving my country and my community - that is very real experience in terms of making a difference."

In addition to College Access Program, Wofford, who is married with two children, also served as the Founding Chairman of Chester County Futures, a mentoring and college scholarship program serving low income students in Coatesville, Kennett Square and Oxford.He also mentored and sponsored a teenage son of a mushroom farmer in Kennett Square, who is in his first year of college.

Wofford, who developed the education platform as special assistant to Gov. Robert Casey from 1987 to 1991, has said criticized parts of the "Leave No Child Behind" bill, charging the bill requires a great deal of testing without supporting funds to pay for them.

"I'll use my experience in Pennsylvania schools to recruit quality teachers, provide real incentives for improving student achievement, and make sure college is affordable for families," Wofford said. "Government can't solve all our problems, but it must provide children with the skills and support to build good lives for themselves."

Wofford, who is a pro-choice and has been endorsed by Planned Parenthood, NARAL and Voters for Choice, has also pledged to do "everything in his power" to protect abortion-rights legislation.He has also taken his opponent to task on his anti-abortion stance, charging that as a state senator, Jim Gerlach supported withholding money to health organizations that counsel patients on whether to have an abortion.

While Wofford said he voted for in favor of the House's Iraq resolution, he was clearly concerned early in the campaign that the president would go head with plans to invade Iraq without consulting Congress.

"I would have voted for the resolution and I wouldn't describe the president's policy as 'go it alone,'" Wofford said."I think a regime change is in our long-term interest.Saddam Hussein is a real risk and threat to our national interests. Post 9/11, we cannot take the risk lightly.If the UN is not prepared to enforce inspections, we have to be prepared to deal with this issue."

Environmentally, Wofford has scored points for his support to reauthorize federal funding to clean up Superfund sites and his opposition to the Philadelphia Suburban Water Co.'s plan to pump millions of gallons of water from the Brandywine to store it in the Cornog Quarry.

Wofford was endorsed by the Sierra Club for his pledge to fight to make sure corporate polluters pay to clean up toxic waste rather than rely on taxpayer money.

"Congress made a promise to the American people when Superfund was created over 20 years ago.That promise was to make sure that our land, water and air was safe for families throughout the country," Wofford said. "Corporate polluters should pay for their toxic waste sites.The president made a mistake when he backed away from corporate responsibilities to the Superfund and instead, shifted the burden to the taxpayers. This is wrong."

Wofford has also received the endorsement of Downingtown Borough Councilwoman Brenda Briton and Wallace Supervisors' Chairman Lou Schneider largely due to his opposition to the project.

Although Gerlach came out early on in opposition to the Cornog Quarry project, Wofford has taken issue with the state legislation authored by Gerlach that was designed to give local municipalities more power to control development. He noted that the DEP permits were granted to the water company despite concerns that the quarry project is not consistent with regional planning.

"I salute (Gerlach's efforts) but it just hasn't proved to be that effective," Wofford said. "The Cornog Quarry water grab is a huge construction project. The permitting process was completely oblivious to smart growth and overall regional planning."

On the issue of prescription drugs, Wofford said he supports a prescription drug plan with a guaranteed benefit under Medicare that will provide an affordable monthly premium, a low co-payment and no deductible for seniors.

In terms of economic development, Wofford said he supports expanding the amount of money employees can contribute to their 401(k) and IRA to jump start the economy, while also supporting work force development initiatives and providing incentives to the bio-tech industry.