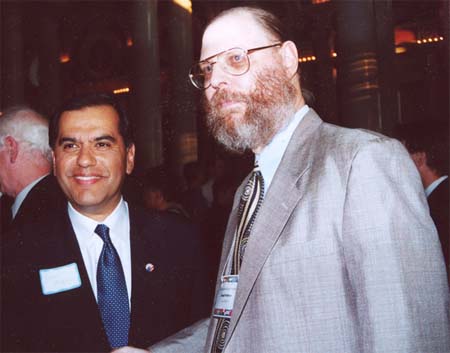 President Bush added a fourth goal in his State of the Union Address on January 29, 2002 when he said that he wanted the Peace Corps to double in size from 7,000 volunteers to 14,000 volunteers in the field by 2007.

How well has Gaddi performed on the four goals of his administration? What have been the highlights of his tenure? What has he done well and what could he have done differently? This is your opportunity to let the Peace Corps know what you think should be the priorities for the next Director. Leave your comments at:

Here is some reference material you can look at before you leave your post.How well has Gaddi performed on the four goals of his administration? What have been the highlights of his tenure? What has he done well and what could he have done differently? This is your opportunity to let the Peace Corps know what you think should be the priorities for the next Director. Leave your comments below.

This story has been posted in the following forums: : Headlines; Peace Corps Directors - Vasquez

Have they tapped you for CEO at MCA?

Good bye, good luck. The airlines will miss you and we'll have to make sure all your wonderful speeches are recorded and preserved for future generations.

Why did Gaddi put the Peace Corps through this ordeal in the first place? He wasn't interested in the job or the Peace Corps. Who will be the next unqualified person the Bush administration will nominate for the position?

This Peace Corps director's commitment to Peace Corps didn't even last two full years. We ask more than that from each PC volunteer!

Come on Gaddi, why the quitting? Was DC too much culture shock for you? Were the natives not friendly? Was the food THAT unedible? Were you homesick for the uber-conservatism of Orange County? Was the mattress too hard? Was the water too soft? Was your stipend too little? Was the experience too much?

Thousands such as myself dutifully served in the Peace Corps for the duration of the 2+ years, and we had real reasons for griping about conditions over THERE. And thoughts of quitting were never too far away, especially when one is curled up in bed with a cold sweaty fever and wearing one's own shit and vomit on their scabie and boil-infested person.

What kind of example are you setting for all the lonely, homesick, ill, frightened PCVs out in the bush who are reconsidering their reasons for Peace Corps service???

Better you go, and take GB Junior and everyone else with you. Be sure and tell Da Schwartzenator "Tha Early Terminator will not be bahck!"

Congratulations on the Medal!

America is proud of you and the
Volunteers!!

Hopefully, you won't be the only unqualified Republican to leave D.C. in the coming months.....

Gaddi,
I want to thank you for re-introducing the Peace Corps to thousands of Americans. Your many speeches, inspired many to look at this worthwhile experience.

God bless you and thank you for your service to America.

1. 2 Volunteers at every site.

2. Open amensty to bring back separated Peace Corps Veterans back to service and into headquarters to help heal the safety issues and provide health care. You could do this by providing a mediation center through General Counsel and provide Volunteers with their lawyer. Go through the service records, provide FECA when necessary and or provide real diversity by letting people with disabilities serve again. We are trained. This would provide the lawyer for volunteers who have been separated, it would reduce attrition and bring the program into an emphasis on quality programming.

3. Chris shay's provided doubling of the Peace Corps salary. Ability to acess SPAF funds up to $2500 with a one page summary and minimal questioning on its needs.

5. That Separated Veterans get benefits for serving their government. They get points for every month they serve, so they are not discriminated against for Federal programs, that is non-competitive eligility and student loan programs

6. If you, don't want us back in service at least provide an IQC to us to provide USAID with a trained work force and small projects with USAID. We would then be serving the third goal.

7. Our student loan, no matter what type of federal loan is wiped out. Provide a $1,000 off our loans for every month of service. If you go to more difficult assignments you get three thousand off.

9. A Budget made up for a poll to be taken of all returned volunteers to gather resources in finding out how third goal is working.


This is off the top of my head. I hope someone else will provide more ideas.


You need to listen Jodie. This is about human life and humanity.

You will go down in Peace Corps history if you make these changes. Use our ideas and bring us back to the Peace Corps family to make the security stronger through our powerful experiences.

Goodbye Gaddi, and good riddance. Peace Corps doesn't need quitters. It needs people who are willing to take off the rose-colored lenses, and keep them off. May the next Director be an RPCV who is willing to stick it out through thick and thin.

THE GOODBYE GIRL, ONLY HE’S A GUY Gaddi Vasquez, whom the Orange County Register has called "a rising star in the GOP" since All in the Family was in original production, announces he’s stepping down as head of the Peace Corps on Nov. 11. Just before a grand jury declared Vasquez incompetent for his role in the county of Orange’s 1995 bankruptcy, he resigned as chairman of the county Board of Supervisors "to spend more time with my family." He then joined Southern California Edison, but when the deregulation shit hit the fan there, he left "to spend more time with my family." After pumping $100,000 in unspent supervisor campaign cash into the GOP in 2000, he was appointed by Dubya (over the howls of Peace Corps veterans) to head the agency. With an extensive series by the Dayton Daily News of Ohio now revealing that it’s life-threatening to join the Peace Corps at a time when the Prez is demanding we send more volunteers into the world’s hot spots, Gaddi’s flown the coop again "to spend more time with my family." Pundits expect Vasquez next extra-short stint to be in Sacramento with the Schwarzenegger administration.

Probably the worst administration in the history of he agency. Gaddi Vasquez and his team has brought absolutely nothing of value to Peace Corps; on the contrary, the team's effect on agency morale will take months, if not years, to repair.

My name is Karen M. Krueger and I am a current nominee for the new Health Progrma in Rural Health Extension in Asia starting April 4, 2004. I am looking forward very much to this experience, even though I have already been in the Peace Corps two times already.

I know that you probably are not happy about all of the public news about the dark side of Peace Corps life; but it had to happen for the sake of the PCV. I am on the Safety and Security Advocacy Committee with the NPCA and I think that when violence of this sort reaches a sort of maximum density of occurrences, something has to be done. I also feel that Peace Corps is a poor Agency and that the folks in Washington are often asked to do about 12 dances on a head pin just to keep programs going and growing. Violence of this sort can sink the Agency; it already has put our effectiveness for change way down there.

You know,when you get back to California, you can keep Peace Corps in mind by using your own background power and politico to do something about all of the violence against PCV's in you backyard.

Many thanks for you time and consideration,
Karen M.Krueger,RPCV MalayaVII/Sarawak and Jamaica 52.

One World is The New World Order. Unqualified Republican?

Until I visited this website today, I was completely unaware of all this and after reading the comments by RPCV's and others, I can only say, that the Peace Corps needs to get back to the idealism and goals it had originally,but,of course, Bureaucracy will continue to mire things down and politics undermine all the progress that the Peace Corps makes. So what else is new? Anyway, let the departing depart and leave behind any animosity you have about the person and what he did or did not accomplish. Carry on from there. HALFORD E. JONES at http://arnis.homestead.com

The Peace Corps is in bad shape when a guy who would have been "selected out" in the early 1960's can become the Director of the organization. And now Gaddi has the chutzpah to withdraw his resignation because things didn't work out politically for him back in California. Ironic, isn't it, that Gaddi wanted to work for Sarge Shriver's son-in-law? Did it ever occur to him that he's just too damn conservative for Arnold?

The site's very professional! Keep up the good work! Oh yes, one extra comment - maybe you could add more pictures too! So, good luck to your team!