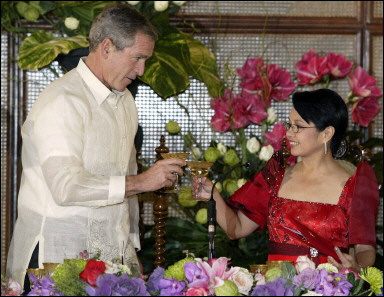 Caption: US President George W. Bush toasts with Philippine President Gloria Macapagal Arroyo at the Malacanang Palace in Manila during his State Visit to the Philippines as part of his 9-day trip in Asia. President Bush's visit has boosted the election chances of leader Gloria Arroyo in next year's presidential poll.(AFP/Dennis Sabangan)

The President’s tour of the Philippines marked the first time in thirty years that an American President has visited the capital city of Manila. In his appearance at the embassy event, the President acknowledged the positive work of the Peace Corps in his remarks and shook hands with several of the volunteers.

In return, Peace Corps Country Director Bill Benjamin thanked the President and the First Lady for their continued and enthusiastic support of the Peace Corps. The President’s visit to the country also included laying a wreath at the Rizal Memorial, addressing a joint session of the Philippine Congress and a State Dinner in his honor. Filipino President Gloria Macapagal-Arroyo visited the United States last May.

Earlier in the week, Country Director Benjamin was present at the signing of a Memorandum of Intent for Expanding Access to Quality Education, a $33 million, six-year education program funded by the U.S. government. This program is geared towards raising the quality of education throughout the country and addressing the special problems of out-of-school youths in conflict affected areas.

This story has been posted in the following forums: : Headlines; President Bush; COS - Philippines