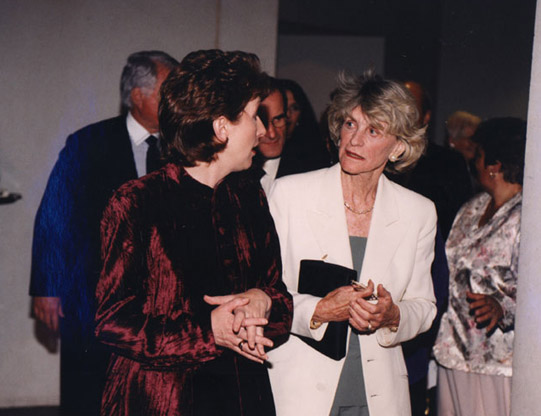 Ambassador Jean Kennedy Smith was invited to speak to the agency in honor of National Disability Employment Awareness Month. The Ambassador is the founder of VSA arts, an international nonprofit organization that works to create a society where people with disabilities can learn through, participate in, and enjoy the arts. She has also written a book entitled “Chronicles of Courage: Very Special Artists” in collaboration with George Plimpton.

During her speech, the Ambassador underscored the importance of honoring those individuals with disabilities who continually contribute their talents to both the international and domestic workforce. She applauded the Peace Corps for volunteers with disabilities who serve overseas and set examples for people around the world, as well as the volunteers whose programs aid individuals with disabilities. In closing, Ambassador Smith remarked that the Peace Corps and VSA share an aspiring and positive view of the world, and through both organizations, the vision of President John F. Kennedy will be realized.

Ambassador Kennedy Smith served as United States Ambassador to Ireland from 1993 to 1998, and is the sister of President John F. Kennedy. Since 1964, she has been a member of the Board of Trustees of the Joseph P. Kennedy, Jr. Foundation, which provides grants to promote awareness and advocacy in the field of mental retardation.

This story has been posted in the following forums: : Headlines; Diplomacy; Disabilities