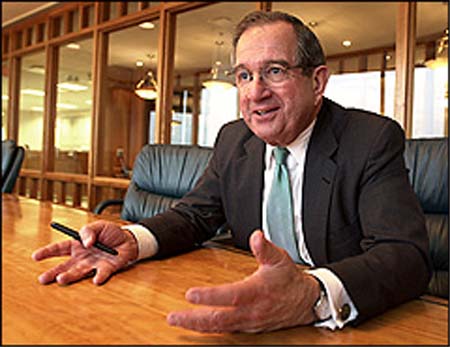 In focus today: US Public Diplomacy. A new report sponsored by the U.S. Congress reveals an unprecedented level of hostility toward the United States, especially in the Arab and Muslim world. The report says the sharp increase of animosity in the past few years requires revival of a serious public diplomacy. VOA's Zlatica Hoke has more.

TEXT: Public opinion surveys published earlier this year show that the United States image worldwide is at an all-time low, especially in many Muslim countries. For example, in Indonesia, the country with the world's largest Muslim population, only fifteen percent of the people view the United States favorably, compared to more than 60 per cent a year and a half ago. A similar decline occurred in Turkey, a secular Muslim country, a NATO member and a long-time American ally. These findings prompted the U.S. Congress to set up a panel of former US diplomats, academics and policy analysts to examine the reasons for the declining reputation and propose remedies. Harold Pachios, a member of the US Advisory Commission on Public Diplomacy, served on the panel.

"The findings were obvious. We knew what we would find. The image of the United States in the Muslim world and in Arab states is very low. It has been down hill over the past two and a half years, and it's now the lowest in history."

TEXT: Despite this anti-American sentiment, panelists were surprised at how favorably people view America in some respects. Harold Pachios says some Americans think Muslims do not quite understand or respect such basic American values as human rights, freedoms and democracy. The panel found the opposite to be the case.

TEXT: The 13-member panel, headed by former U-S ambassador to Syria Edward Djerejian, found that what turns Muslims against the United States is the perception that it does not always act in concert with these values. For example, the group was told the United States values human dignity, but does not stand up for all oppressed people equally. It promotes democracy, but makes alliances with authoritarian leaders in many countries.

"The phrase 'double standard' and the word 'hypocrisy,' we found in our travels throughout the Middle East. It's not a problem with American values -- America is viewed as a beacon of enlightenment in terms of the values we express -- but the belief that we are hypocritical, that we don't apply those values in the Middle East."

TEXT: The report titled "Changing Minds Winning Peace," finds that most of the hostility toward the United States stems from its foreign policy. The Arab-Israeli conflict is the most visible point of contention between the United States and Muslim countries.

"The report acknowledges that people in the Middle East particularly and in most of the Muslim world, in fact, view the United States through the prism of Israeli-Palestinian relations. And secondly, the U-S invasion of Iraq has indeed, whether or not it is ultimately successful, currently tarnished the image of the United States in this part of the world."

TEXT: Harold Pachios says the US government's tendency to make unilateral foreign policy decisions, such as the occupation of Iraq without the approval of the United Nations, has added to the hostility. At the same time, not much effort has been put in diffusing the anger because as the report states: "In this time of peril, public diplomacy is absurdly and dangerously under-funded."

During the Cold War, the US Information Agency, or USIA, was in charge of American public diplomacy efforts, including international broadcasting and cultural and educational exchanges. Retired professor Laird Anderson, who taught journalism in USIA-funded programs in many developing countries, says this kind of public diplomacy is very successful.

"I think it achieved a great deal. I was able to deal with professionals to begin with and academics. I was also able to deal with government leaders who were trying to come out of despotism in many cases and to a free air of democracy, and certainly a free press was one of these things. They were hungry to see how to define a free press."

TEXT: But at the end of the Cold War, there seemed to be no need for USIA, and the agency was closed, although some of its programs continue under the auspices of the State Department and US Agency for International Development.

Today, in view of the terrorist threat, the report says the United States needs an even more comprehensive public diplomacy than it did in the Cold War. The authors call for the creation of a new White House office to manage the strategic direction and government coordination in promoting the US national interest around the world.

In order to improve the U-S image, the report states, there must be more cultural exchanges, more American libraries, schools and information centers in the Arab and Muslim world, and all these must be more accessible than they are now. In addition to that, US diplomats must be better trained in foreign languages and cultures so they can appear in the foreign media.

"In my own view, the real issue is communicating on the medium and through the media that everybody else does in the rest of the world. And that's television and radio. We are not in that debate."

TEXT: (BEGIN OPT) Mr. Pachios says not more than a handful of American diplomats are able or willing to participate in media discussions on Arab radio or television. (END OPT)

None of this comes cheaply. But the report concludes that public diplomacy requires a "seriousness of commitment that matches the gravity of our approach to national defense and traditional state-to-state diplomacy."

Media and political analysts have commended the report for its objectivity and thoroughness. But there are objections to some of the recommendations.

"Cultural and educational exchanges and activities and public diplomacy can be helpful at the margins, but the limiting factor here is that it's very difficult to, quote, 'explain,' unquote, American policy if that policy itself is wrongheaded, and is rightly seen as being wrongheaded by non-Americans."

TEXT: While not disputing that, the report insists public diplomacy has a key role in dealing with the world. Harold Pachios says the report itself is a big step forward.

"If I lived in an Arab country, or in a Muslim country, I would at least take heart from the fact that the Unites States worries about their opinion, wants them to have a good opinion of the United States and believes their opinion is important."

TEXT: Analysts concede in the short run, public diplomacy may not yield obvious results. But in the long term, it is a vital component of American foreign policy.

This story has been posted in the following forums: : Headlines; Diplomacy; Speaking Out