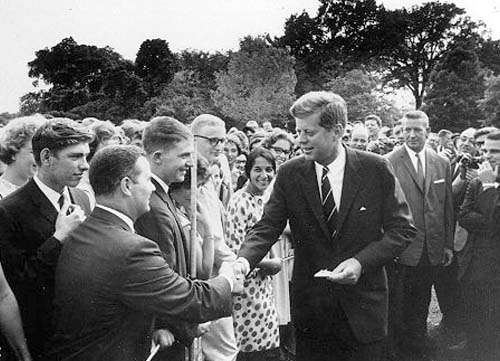 WASHINGTON, D.C., November 17, 2003 – To commemorate the 43rd anniversary of the founding of the Peace Corps, Director Gaddi H. Vasquez announced that Peace Corps Week celebrations will be held on March 1 through March 7, 2004. The Peace Corps is encouraging former volunteers from across the country to once again become involved in this national celebration.

“Returned Peace Corps volunteers are in a unique position to bridge the gap of cultural understanding between Americans at home and the communities they served abroad. Their continued commitment to the mission of the Peace Corps is one of our greatest assets to engage new volunteers in Peace Corps service," said Director Vasquez.

During Peace Corps Week, former volunteers will be visiting classrooms, community organizations, and workplaces through the United States to share their experiences in developing countries. U.S. students will also participate in telephone conversations with currently serving volunteers working in dozens of countries around the world.

For free. My volunteering for Republicans doesn't happen. call your buddies Ken Lai to send me two hundred for the day to go into my local school.