Peace Corps on a High-Tech Mission to Mexico 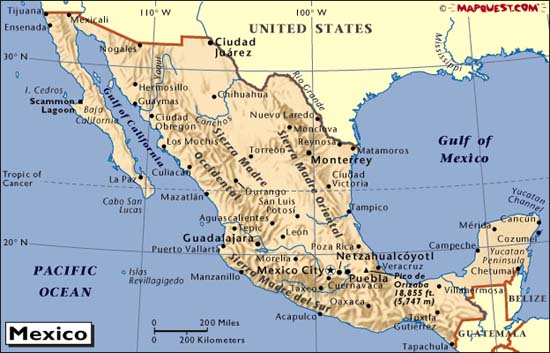 Read and comment on this story from Fox News that the Peace Corps has signed an agreement with Mexico that will lead to Peace Corps volunteers serving in that country for the first time.

Volunteers will work "in a sort of high-tech field, rather than" what is "commonly regarded as a traditional role for the Peace Corps," said Roger F. Noriega, assistant secretary of state for Western Hemisphere affairs, when he announced the program earlier this month.

It is no exaggeration to say that this is truly a historic occasion in the history of the Peace Corps. In a conversation with Director Vasquez, the Director told PCOL that the response to the announcement has been overwhelmingly positive and that plans are already in the works to have the first group of volunteers in Mexico in 2004. Congratulations to the Peace Corps and to Director Vasquez on this new program. Read the story at:

Peace Corps on a High-Tech Mission to Mexico*


Peace Corps on a High-Tech Mission to Mexico

WASHINGTON — Peace Corps volunteers are expected to enter Mexico for the first time ever next year, heading south to help train workers in high-tech skills. The mission comes as some industry observers say they fear America is losing its high-paying jobs in the field to other countries.


The Peace Corps (search) is still working with representatives of the Mexican government to define the mission, but when Mexico invited the volunteers, it asked that they focus on science, technology and small business.

Volunteers will work "in a sort of high-tech field, rather than" what is "commonly regarded as a traditional role for the Peace Corps," said Roger F. Noriega, assistant secretary of state for Western Hemisphere affairs, when he announced the program earlier this month.

The Peace Corps was established by President John F. Kennedy in 1961. Since then, more than 170,000 volunteers have served in 136 countries in such areas as education, health, HIV/AIDS awareness and education, information technology, business development, the environment and agriculture. Peace Corps volunteers, who currently can be found in 69 countries, are expected to work for two years and must be U.S. citizens and at least 18 years old.

The Peace Corps' mission to Mexico is part of the "Partnership for Prosperity" (search), an initiative launched in 2001 by President Bush and Mexican President Vicente Fox to harness the power of the private sector to foster an environment in which Mexicans do not feel compelled to leave their homes because of a lack of jobs or opportunity.

"It will probably be a high level of training because the talent is there. The technology is there," Daly said.

Noriega said that Mexico wants the program to be part of a technology transfer. Volunteers will be expected to have computer expertise they can pass on to their Mexican partners.

But too much technology transfer worries some critics, who warn that the developing world poses a threat to take away America's high-tech and high-salary jobs.

"What is the U.S. public policy? I am hard put to find a document" outlining it, said Intel co-founder and chairman Andrew S. Grove, who added that China and India represent the most serious threats to American high-tech job security. Intel manufactures computer chips and processors.

Offering evidence for Grove's argument, the Gartner Group, a market research firm, estimates that 10 percent of jobs at U.S. information technology vendors will move offshore by next year. Forrester Research predicts that U.S. companies across the board will lose approximately 3.3 million technology jobs by 2015.

Manufacturing jobs have been heading south of the border and to other cheap labor destinations for decades, but the departure of high-tech jobs is a new phenomenon, in part because these positions are relatively well-paid and require some education, said Brookings Institution (search) senior fellow William Dickens.

Dickens acknowledged that India and other South Asian nations are taking high-tech jobs formerly in the United States, but questioned the accuracy of estimates given by researchers predicting widespread job losses in the coming years. "I don't think either of those groups are irresponsible ... so I suspect they've done the best they can without a scientific survey of the sort that the Bureau of Labor Statistics" conducts, he said, adding that without such a survey, it is hard to draw any solid conclusions on the path of the labor force.

He said he also doubts that Latin America will become a future destination of technology jobs. While programmer jobs and customer service help lines are often sent overseas -- particularly to India and Pakistan, because those countries have a competitive advantage in English-speaking skills -- the language barrier makes it unlikely that high-tech jobs will head to Mexico or the rest of Latin America.

Ana Eiras, Heritage Foundation (search) senior policy analyst on international economics, said she is not concerned that the potential loss of high-tech jobs will pose a danger to the American economy. She said that while some nations have a competitive advantage in terms of lower labor costs, the United States guarantees the rule of law, has relatively limited regulations and enjoys a stable economy.

"The U.S. is one of the most attractive places in the world to do investment. I don't see us losing that advantage at least in the short term," she said.

Many factories moved to Mexico in 1994 and 1995 to take advantage of the low cost of doing business, but have subsequently moved to China or back to the United States because Mexico does not have a consistent rule of law for businesses, and Mexico's regulations are too convoluted to understand, Eiras said.

"Mexico, in terms of regulation, is a tough place to do business because you have to comply by all the regulations they have for hiring people, establishing a factory, environmental regulations," she said.

Next year's Peace Corps mission will begin with 15 to 20 volunteers slated to arrive in mid to late summer. Peace Corps veterans will be the first volunteers down there in order to help establish the mission.

Eiras said America has nothing to fear by the Peace Corps' assistance and doubts that the aid they offer will help inspire a flow of high-tech jobs to Mexico.

"I'm not sure that whatever the Peace Corps is going to do is going to be huge," she said.

Please send me more information on how to get involved with your program.
Thank You~ Tanya Garcia
wildflower893@hotmail.com