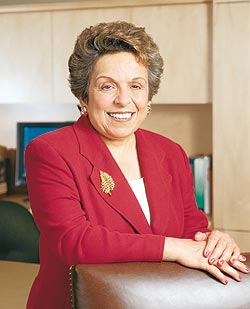 In rural Haiti, Shalala views a pioneering effort on AIDS

THOMONDE, Haiti - After walking a muddy path between two sugar-cane fields, University of Miami President Donna Shalala on Tuesday crouched down to talk to spindly thin patients and leaned over desks to quiz young nurses in this Haitian hamlet.

The former Health and Human Services secretary strode in and out of the labs, pediatrics wards and exam rooms during a whirlwind visit to the Bon Sauver Hospital in Canges and the Thomonde Health Center, both in Haiti's central plateau.

''I know a lot about rural health and rural health clinics,'' said Shalala, a one-time Peace Corps volunteer in Iran and Cabinet member in the Clinton administration. ``As secretary I traveled the world, although I never made it to Haiti.''

Shalala helicoptered into this remote area with a delegation charged with looking at a medical partnership that is saving lives and that might be replicated elsewhere in Haiti.

The U.S.-based Partners in Health, which also runs the Canges hospital, got together with Medishare, a Haiti-focused Miami group founded by UM doctors. The project is receiving assistance from the United Nations Global Fund and a grant from the Green Family Foundation. Partners will receive $13.7 million for HIV-related work.

Now, where 10 people a day used to show up for a consultation, 150 jam the benches and six lie in a makeshift ward awaiting medical treatment. And today, fewer are dying from diseases like tuberculosis, malaria and even HIV.

''This boy has AIDS and sarcoma,'' Dr. Patrick Almazor told Shalala as he held the hand of a boy with glassy eyes whose head was covered with scabs. An AIDS orphan, his grandmother had brought him in. ``We'll put him on triple-therapy.''

Shalala looked pained as she moved to the next room, where she picked her way around the cots holding HIV patients too weak to be sent home.

''This is why we need to build a bigger hospital,'' said Dr. Arthur Fournier, associate dean for community health at UM and co-founder and inaugural president of Medishare.

Fournier made a pitch to deepen and broaden involvement in Haiti, where there are fewer than two doctors per 10,000 people.

A nearby government cotton-buying station, padlocked for two decades, might serve as a hospital. But Shalala and others in the delegation, which including Dr. John Clarkson, dean of UM's medical school, know that cash alone won't solve the country's grave challenges.

Haiti has the hemisphere's highest rates of HIV, TB, infant mortality and maternal mortality, and its lowest life expectancy.

Shalala said she hopes to increase the number of UM medical students working in Haiti during vacations. She also wants to see more nurses in Haiti and to help raise more money. During her visit to Thomonde, the UM president expressed interest in its community health agent program.

''What is your biggest problem?'' she queried 50-year-old Jeannot Lariviere, who was clutching a pile of forms, part of the community health census he and almost 50 other agents just completed.

''The idea would be to get other universities, other medical schools, to work in different regions so we could canvass the country,'' said Clarkson, citing interest by the University of Florida and Duke, Columbia and Northwestern universities. He said he hopes UM can learn from the current ties between Harvard and Partners in Health.

''The diseases don't know what country they're in,'' Shalala said later at a reception in Port-au-Prince, the capital. ``So it's important for the people of South Florida to know what we do here will affect them.''

This story has been posted in the following forums: : Headlines; COS - Haiti; COS - Iran; HIV; AIDS