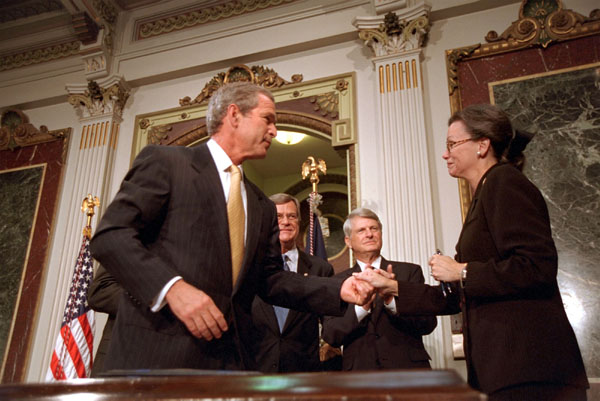 THE PRESIDENT: Thank you. Ours is a city here full of memorials, full of symbols of America's gratitude for service. And today we come together to honor one such man, who dedicated his life to service. A life who left us far too soon.

Nancy, welcome. I want to thank you and your family members for being here. I want to thank Trent and members of the United States Senate. One reason he didn't ask you to speak he was afraid you were going to go on too long, Phil. (Laughter.) I appreciate Senator Miller. I thank the Georgia delegation for coming, members of the Congress. It's good to see the former Speaker; thank you for being here, as well.

I appreciate John Ashcroft, the Attorney General, for being here; and Elaine Chao, members of my Cabinet. I'm so honored that members -- former directors of the Peace Corps are here, including the current Acting Director, Chuck Baquet. Thank you for being here, as well.

I thank Michael Adams, the President of the University of Georgia, for being here. And I want to thank my Ambassador-designee to the Vatican, Jim Nicholson, for being here, as well.

Paul Coverdell was a man of unusual abilities and striking character. He spoke with candor when others might hide the unpleasant truth. He was wise and reasonable in a city that often lacks both virtues. He was a man of principle who understood our political system's essential need for compromise. He was respected by both allies and adversaries.

And the causes to which he dedicated himself drew all his energy and thought and effort and commitment. He understood every parent's hopes for a quality education. So he pressed for tax-free savings accounts for education expenses. Today, his idea is law. And today, we rename those accounts for him: The Coverdell Education Savings Accounts.

He had a great heart and compassion for others, and that could be seen in his imaginative and strong leadership of the Peace Corps. As the Corps' first post-Cold War director, he had a vision for a new era, and the leadership to bring those dreams into being.

Paul was a champion of science and medical research. Wherever Americans push the frontiers of knowledge, they're advancing in the spirit of Paul Coverdell. And so, I applaud Senator Miller for his leadership in the decision to name the University of Georgia's new health science building for Paul.

You know, Paul and Nancy were frequent visitors to my folks' house in Maine. They were such good friends that Mother got them to plant roses. She's a pretty tough taskmaster. (Laughter.) You can imagine old Paul out there digging away, Mother yelling, "More dirt." (Laughter.) The hole would be dug and Mother saying, "You put the rose bush in there." At any rate, we get to now see the roses, and we think of Paul. The flowers bloom only a short time, but like the roots of those bushes, his memory lasts a long time. And the fruits of his labors we will see for a long time coming.

I've spoken today of honoring Paul. The truth is, he honored us by his selfless service. We're lucky to have known him.

It is now my honor to sign the bills honoring a great man.

(The bills are signed.) (Applause.)

This story has been posted in the following forums: : Headlines; President Bush; Peace Corps Directors - Coverdell