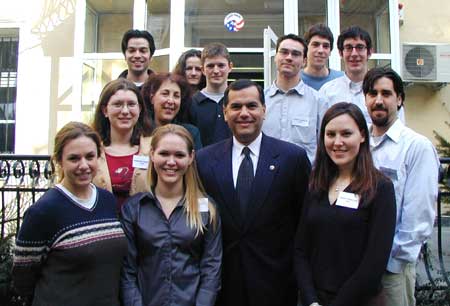 For as long as he can remember, Gaddi Vasquez knew he was going to college. It was something his mother Eva told him constantly from the time he was a little kid. As migrant farm workers in Texas, neither of Vasquez’s parents had the opportunity to attend college, but they taught their children that academic achievement was the foundation they needed to accomplish their goals. They taught Vasquez and his younger brother Ben that they could succeed in life and do something lasting and meaningful if they had determination and perseverance.

His parents moved the family to Orange County, California, in search of greater opportunities when Vasquez was in first grade. While in high school, Vasquez decided he wanted to become a police officer. "I’ve always been inclined to serve others," Vasquez said. "I’ve always had a protective spirit." So he became a police cadet with the Orange Police Department. "Catching criminals was something I enjoyed," he said.

As a result of encouragement from his mother, Vasquez studied hard and did well enough in high school to obtain scholarships to put him through college. Having completed all his high school requirements, he began his college career at Santa Ana College, a community college, in the second semester of his senior year. Vasquez took six months off from school to attend the police academy. At the age of 19, he became the youngest police officer in the history of Orange County.

He returned to Santa Ana College and graduated in 1977 with an associate’s degree in administration of justice. Among the things Vasquez learned at Santa Ana College, organizational leadership and critical thinking skills are most important to him. Vasquez also said that community college provides students with the opportunity to develop their social skills by dealing with a more diverse gathering of students.

Vasquez went on to complete his bachelor’s degree, graduating with honors from the University of Redlands in 1980, becoming the first member of his family to earn a four-year college degree. He attributes his success at Redlands to the instruction he received at Santa Ana College where he learned how to be successful in the "college culture."

After graduation, Vasquez continued to work as a police officer in Orange County. Vasquez says he enjoyed his interaction with the public and met many good people in public service. In 1981, he got a job as an assistant to an Orange County supervisor, then moved to the private sector working for the Southern California Edison Company as a regional manager. From there, he moved to Sacramento to serve in the administration of former Governor George Deukmejian. In 1987, he was appointed by the governor to the Orange County Board of Supervisors, serving as its first Hispanic member at the age of 32. In 1995, he returned to Southern California Edison where he served as a division vice president for public affairs.

In February 2002, Vasquez was sworn in as the 16th director of the Peace Corps after being nominated by President George W. Bush. He is the agency’s first Hispanic-American director.

The Peace Corps is an international volunteer organization that was established in 1961 by President John F. Kennedy. The Peace Corps, a federal agency with a $300 million budget, takes college graduates and sends them to developing countries for two years to live and work side-by-side with local residents in a variety of assignments, from teaching English as a foreign language to working with small farmers to increase food production while promoting environmental conservation practices. The organization has three main goals: to help the people of interested countries and areas in meeting their needs for trained workers; to help promote a better understanding of Americans on the part of the peoples served; and to help promote a better understanding of other peoples on the part of Americans.

"It is a very defining period in their lives," said Vasquez about the time volunteers spend abroad. "You learn a lot about yourself." Volunteers must be agile, creative and innovative and share their values and views with others, Vasquez said. They are able to learn about other cultures and to "develop the qualities of determination and perseverance with a vision toward the long term," he said. "Many people in leadership today developed a passion for public and humanitarian service from their Peace Corps experience."

Vasquez advises students to "chase your dreams so they become a reality." Despite the hardships of childhood in a poor migrant farm working family, Vasquez pursued his dream of public service that has led him all the way to Washington, D.C. and the directorship of the Peace Corps. Now, says Vasquez, "I consider myself one of the luckiest people alive."