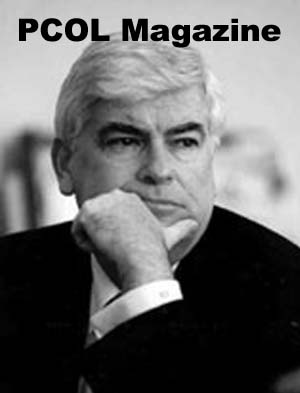 NASHUA, Dec. 30 -- Sen. Chris Dodd gets “uneasy about the level of anger and hate that gets attributed to our political process.”

Dodd, campaigning for Joe Lieberman, drew a distinction between Lieberman and other candidates while speaking at a Rotary Club meeting at the Crowne Plaza hotel.

“Joe is a person of deep conviction, deep faith. He uses a modulated tone when he talks, does not engage in the language of extremes at all,” the four-term senator from Connecticut said. “That may cost him in the minds of some as we go through the process of selecting a nominee.

“But I worry that only those candidates who seem to appeal to the short-term emotions may cause some to become irate, may cause them to go out and choose a candidate based on those kinds of feelings rather than stepping back and
thinking about who is the best possible person we can put forward,” he said.

Though Dodd didn’t mention names, his talk of Lieberman’s “moderated” views and tone contrast with descriptions of Howard Dean’s.

Dodd, however, downplayed any talk of widening divisions between Democrats in an interview with PoliticsNH.com.


“I’m a great believer in Sam Rayburn’s old line, ‘I’m a Democrat without suffix, prefix, or apology,’” said Dodd, the Democratic National Committee chairman in 1996 and 1997. “The strength of our party is its diversity. And in
many ways, Joe is a mainstream Democrat.

“There are differences clearly. But the idea to suggest that there are these camps -- there is nothing that could be more harmful to party than to be talking in those terms.”

He also said that his Connecticut colleague’s “courage of convictions” and “mainstream” positions make him the one candidate who can beat President Bush.

Many considered Dodd to be a potential candidate for president earlier this year. He announced that he would not run in March.

“I gave it some thought,” he said. “But I’m very happy doing what I’m doing in the Senate. I like my job there. I’ve got a 2-year-old child, and I love representing Connecticut, and I love the fact that Joe is my candidate for
president.”

This story has been posted in the following forums: : Headlines; Congress; COS - Dominican Republic; Politics; Election2004

Howard Dean is the right candidate. Look at who is supporting him Al Gore and Bill Bradley. Yea, Joe is more determined than ever to be negative. The DLC has had there fun for ten years and have had there chance. By the way, Dodd does not help in reform of Peace Corps safety and for volunteers who have been victims of violence and neither will Joe. Negativity doesn't help Joe. Both you and Dodd have been in the Senate for years and have not helped in Peace Corps reform, no national health care plan and your plan for the economy won't help the poorer folks in our country. I think you are a Republican.