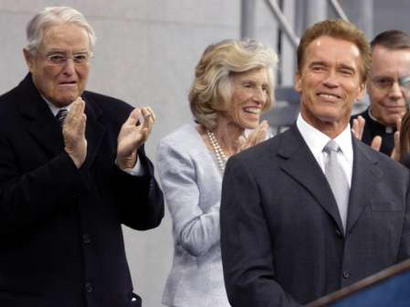 But yesterday, after Lowdown's inquiries to NBC, the network agreed to continue discussions with Gov. Arnold Schwarzenegger's wife, who joined NBC News in 1986.

According to sources familiar with discussions between NBC News president Neal Shapiro and Shriver, she was asked before Christmas to resign from her job as a contributing anchor and correspondent for "Dateline NBC."

An NBC News spokeswoman yesterday vehemently denied that Shriver had been fired, saying: "I can tell you that she is still on the job at 'Dateline.' "

And Shapiro said, in a statement, that "Maria and I have had a number of discussions about her future with NBC News, including the possibility of extending her leave - but nothing has been decided. Together we will decide how to move forward when we meet in California next week."

Shriver herself told me: "I am talking with NBC News to try to work things out. ... Both Neal and I understand that this is uncharted territory and an unusual situation."

But I hear that news division officials were "freaked out" by a Dec. 13 Los Angeles Times account of Shriver's alleged behind-the-scenes lobbying to pass her husband's budget plan - and wanted her to exit gracefully.

There was further alarm at the news division when Shriver was quoted about recalcitrant California legislators: "I say if some of these legislators were children, we'd give them a timeout."

Sources told me that Shapiro suggested that Shriver announce her departure with a warm-and-fuzzy statement indicating that she has decided to work full-time as First Lady for the duration's of her husband's term.

But Shriver declined to cooperate, I'm told, arguing that she can still contribute nonpolitical, non-California stories to "Dateline," having spent her long Emmy and Peabody Award-winning career maneuvering successfully through ethical minefields as a member of the politically powerful Kennedy clan.

Journalistic ethics expert Aly Colon, of the Poynter Institute, told me that Shriver's position will be, at best, "difficult" if she continues at NBC News while her husband is governor. "You would need all kinds of transparency to clue the viewer in, and try to protect the credibility of both the institution and Maria Shriver."

The 48-year-old mother of four returned to the "Dateline" anchor chair on Nov. 28 after a two-month leave to campaign for her movie-star husband. She only recently reupped for another three-year contract with a seven-figure salary.