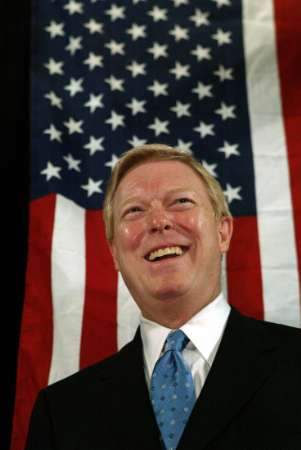 NEW YORK - Rep. Dick Gephardt offered a vigorous defense Tuesday of his vote in favor of the use of force in Iraq and marched squarely into a debate that has roiled this presidential campaign.

In a speech at the Council on Foreign Relations in New York and in response to questions afterward, Gephardt emphasized that he had conferred with officials at the CIA and advisers to President Bill Clinton before he concluded that Iraq was a serious threat.

He said he did not regret his decision, although his advisers acknowledge that it had cost him support.

Howard Dean, whose opposition to the war has galvanized many voters, has repeatedly attacked Gephardt on this issue.

These days, Gephardt avoids discussing Iraq during his campaign stops in Iowa, where his stance is unpopular among some Democratic loyalists.

"There has been a lot of focus in this campaign on my support of President Bush in the days after Sept. 11," Gephardt said.

"And yes, I supported the congressional resolution that gave President Bush the authority to act in Iraq, even as I urged him to seek multilateral support through the United Nations," Gephardt said.

"I don't apologize for that," he said, "and I'm not sorry that Saddam Hussein is gone."

But Gephardt was sharply critical of Bush's handling of the occupation of Iraq and the crises in North Korea and the Middle East.

He described the occupation as "a deadly quagmire" and criticized the president as having alienated U.S. allies in Europe.

"My problem with the Bush foreign policy team, and the cold warriors they've brought out of semi-retirement to run it, is their overwhelming arrogance and lack of appreciation for the subtleties of democracy-building or alliance-strengthening," Gephardt said.

Gephardt said he would abandon what he described as Bush's foreign policy of isolation.

He promised to support debt relief and an international criminal court, and to expand the Peace Corps and increase financing of efforts to foster democracy and fight AIDS in Africa.

"I believe America has to engage the world and invest in it," he said.

Gephardt criticized Dean for saying that America was no safer after Saddam's capture.

This story has been posted in the following forums: : Headlines; Election2004