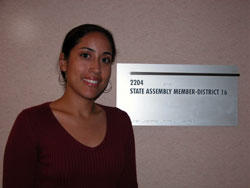 
Social work in the real world
For students in the School of Social Welfare’s top-tier grad program, field placements bring their classroom studies to life

Through her internship in the Oakland office of Wilma Chan, California Assembly majority leader, School of Social Welfare grad student Laura Jiménez is acquiring insight into the 24/7 life of a lawmaker. Jiménez is interested in varied aspects of public policy — and a possible career in politics.
Cathy Cockrell photo


Supervised field-work placements, supported by discussion seminars, are hallmarks of the graduate curriculum at Berkeley’s School of Social Welfare (SSW). The school’s 60-year-old master’s program, with its close marriage of academic training and direct experience, is consistently rated among the nation’s best; US News & World Report recently ranked it third out of 156 programs nationwide, and first in research productivity.

Experiential learning figures prominently in the school’s curriculum. With field work accounting for close to half the units required to earn a master’s degree, SSW students fan out to scores of Bay Area organizations, where they collectively contribute more than 100,000 hours each year to public and private programs.

Traditional counseling work with clients accounts for many of those hours, but over the last decade SSW has increasingly emphasized public-sector agencies serving disadvantaged clients, says Adjunct Professor Bart Grossman, director of field instruction. To perform field work in these settings can be “very demanding and intense,” he notes, but also an invaluable preparation for social-work practice “in the real world.”

The school also offers rare field-work placements in state and federal legislative offices. It’s been doing so for some time. U.S. Representative Barbara Lee (D-Calif.), a 1975 SSW graduate, worked in the Ninth District office of the late Ron Dellums — whose congressional seat she now holds; another alum interned with former Assemblywoman Dion Aroner.

Working in the local office of Assembly Majority Leader Wilma Chan, Jiménez is acquiring — among other things — insight into the day-to-day life of a policymaker.

“It’s a 24-7 job,” she observes. Whether or not she takes the plunge into politics, SSW’s policy and management specialization, and her field work in Chan’s office, have armed her with experience, she says, in each of her areas of interest.

The school has nurtured ongoing partnerships with hundreds of agencies and social-work professionals. As a result, students like Jiménez are able to get first-hand experience, prior to graduation, in settings matched closely with their interests — while benefiting from, and contributing to, the quality of social services in California.

This story has been posted in the following forums: : Headlines; Social Welfare; Internships