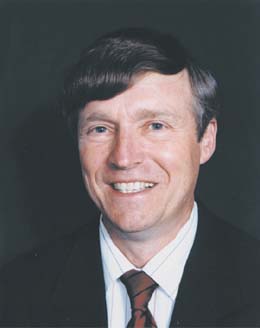 Sholley aims to change the way state does business

EXPERIENCE:Republican nominee for state Senate, 2000 and 2002

"In my early college days, I was a Fred Harris liberal," he said, referring to the former Oklahoma senator and Democrat who twice ran for president, in 1972 and 1976. Sholley said his father, an iron ore miner, was a union leader.

"I was raised a Democrat," said the North Attleborough resident. "I became a conservative for common-sense reasons."

This is Sholley's third run at the Senate seat, held by Jacques since 1993. Jacques, whose last day in the Senate was Jan. 4, accepted a job as president and director of the Washington, D.C.-based Human Rights Campaign, the nation's largest gay-rights political group. Sholley garnered about 30 percent of the vote against her in 2000, and 40 percent in 2002.

Sholley is among eight candidates - six Democrats and two Republicans - running in a special election to fill the Senate seat, whose district includes Millis, Needham, Norfolk, North Attleboro, Sherborn, Wayland, Wrentham, and parts of Attleboro, Franklin, Natick and Wellesley. His opponent in the Feb. 3 Republican primary is Rep. Scott Brown of Wrentham.

"I think either one of us would make a good candidate," said Sholley, who owns Grass Roots Lawn and Landscape Co. in North Attleborough. "We're in a district that is more fiscally conservative."

A Vietnam veteran who also served in the Peace Corps, Sholley said the concerns of seniors, families and veterans are "at the top of my priority list."

He said the three chief needs on which the Legislature should be focusing are reducing taxes, passing a constitutional amendment banning gay marriage and making health care less costly.

"I'd like to see a change in the way we do business in this state," said Sholley, a divorced father of two daughters, Lisa, 28, and Kathryn, 24. "I started running because I wanted to see some change. ... There is a lot of waste and inefficiency in our system - a lot of patronage and corruption. We need to change that, but we can't do it as long as one party controls Beacon Hill."

Sholley said the state income tax, currently 5.3 percent, should be reduced, by increments over the next five years, to 2.5 percent. He also wants to enact "a sizeable decrease" in the motor vehicle excise tax. In addition, he wants to decrease the hours and pay of legislators, saying this state can function perfectly well with a part-time Legislature.

Sholley is "against any sort of compromise on gay marriage." He thinks the state Supreme Judicial Court overstepped its legal authority in ruling that it was unconstitutional to bar gay couples from marrying, saying the "four justices who voted in the affirmative should resign" or perhaps face impeachment proceedings.

"I would be able to change the way things have been done in this state," he said. "I think I am the right man for the job."