RPCV prays for the President 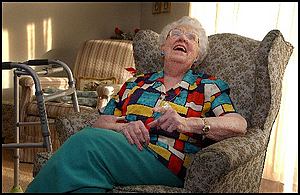 RPCV prays for the President

The President needs support from above, Miss Pauline says

The old woman sits at her dining room table, the contents of a yellow folder spilled in front of her.

There's a thank you letter from former president George Bush, several from religious leaders, dozens from Texas and Tennessee, France and Italy, and all the places in between.

We pray for our president, too, the letters say.

The old woman's hands tremble. Her skin is translucent. Her nails are painted pink.

"There is no end to what a president can accomplish if he has the support of hundreds of thousands of prayers."

Hord will be 97 on Good Friday in April. There have been 18 presidents since she was born. She's prayed for nearly all of them.

In 2002, Hord published a book of daily devotions. She titled it, "Praying for the President."

When asked why it's so important to pray for the president, Hord shakes her head. It's in the Bible, 1 Timothy 2:1-2:

"I urge, then, first of all, that requests, prayers, intercessions and thanksgivings be made for everyone - for kings and all those in authority, that we may live peaceful and quiet lives in all godliness and holiness."

Hord's face, round with dimples, looks pained when she talks of the duties presidents undertake."Presidents have a terrible responsibility," she said. "The most important thing people can do for their country is to pray for their president."

Hord began praying daily for the president in 1977, Jimmy Carter's first year in office. Everyone was criticizing him, Hord said. She said the Lord spoke to her and told her, "The best thing you can do for anybody is to pray."

She said the Lord gave her the words and shewrote them down. Every single day for a year, Hord wrote prayers for Carter.

Then she packed them away on a shelf. It was only when friends asked her to write an autobiography a few years ago that she thought of the daily devotions.

Hord's life has been one of deep devotion.

She taught in Memphis City Schools for 60 years. She went into prisons and taught hardened criminals to read for nearly 20 years. She wasin the Peace Corps in South America.

But Hord didn't want to write a book about herself.

"You need drama - highs and lows - for people to want to read about you," she said.

"I think I would be too boring."

A publisher was interested in Hord's prayers to President Carter. Because they were written specifically for that president, Hord spent five months rewriting many of them so they could apply to any president.

Her body is failing. Her eyes. Her legs. Her heart. She has vertigo some days, where the world is spinning and she has to be in a dark bedroom - quiet, not moving an inch.

She wrote out the revisions by hand. Volunteers at Christ United Methodist Church typed them into a computer for her.

"The strange thing is that many people tell me the daily devotions fit into what is actually happening in the president's life that day," Hord said. "All I can say is it's the work of the Holy Spirit."

About five months ago, the doctor said Hord couldn't live by herself anymore. Her heart was too fragile. A caretaker moved into Hord's small sixth-floor apartment in East Memphis.

Hord stopped going to church a few months ago. "When you get old, you're so tired," she said.

She calls herself lazy and laughs, but her failing body frustrates her. She never missed a Sunday before. She can go if someone takes her. And she can get around on a walker pretty well. But too much activity wipes her out.

At Christ Church, Hord is called the "Prayer Warrior."

Hord began praying when she was around 5 or 6. She and her family lived on a farm near Memphis. Her younger brother George was sick with malaria. In her bedroom, she heard the doctor tell her parents that George would probably die.

She thought that if she prayed hard enough, God would listen.

She dozed off sometime in the darkness. When she awoke, she heard her mother tell her father, "George is going to be OK."

From that moment on, she has prayed every day.

From her windows, Hord looks out on the world. A world she says has grown more evil.

"We should be getting better," she said. "But we're getting worse."

She says it's vital we pray for our president.

This story has been posted in the following forums: : Headlines; Religion; Older Volunteers