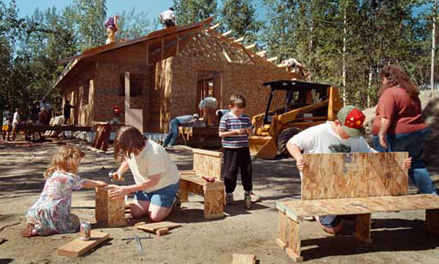 WASHINGTON, D.C., January 23, 2004 – More and more individual Americans, local organizations, schools and U.S. companies are stepping up to help communities like Almazor, Uzbekistan and Peace Corps volunteers improve the lives of others across the world. Until recently, the women and children of Almazor, Uzbekistan, made a daily journey, carrying buckets to gather water needed for drinking, cooking and bathing. Today, a generous grant from a U.S. company and the efforts of a Peace Corps volunteer will soon bring to this community a pipeline that will carry clean running water to every home, something that was – just a few years ago – only a dream for the residents of this Uzbekistan community.

In 2003, Private sector donations to the Peace Corps Partnership Program for projects such as the one in Almazor totaled over a half a million dollars – a reaffirmation of donor commitment to the promotion of peace and friendship and to the fostering of grassroots development in countries around the world. Since the implementation of the Partnership Program, private sector funding has made over 4,500 volunteer-led partnership projects possible.

The J.P. Morgan Chase Foundation’s grant that made the Almazor pipeline possible is part of their continuing support of the Partnership Program and Peace Corps volunteers. Recently, the foundation contributed a new grant of $35,000 to be used to support many small-scale volunteer projects aimed at grass-roots development. Over the years, the J.P. Morgan Chase Foundation has funded youth programs and summer schools, the development of libraries and community centers, and a multitude of projects in the areas of small business development, general health, water/sanitation, and information and communications technology.

The Partnership Program also recently received a donation of $75,000 from the United Parcel Service (UPS) Foundation. This generous gift will be used to fund micro-enterprise projects in the 71 countries where the Peace Corps operates. One such project in Vanuatu, an island in the Pacific, will increase the community’s capacity for food security and nutrition for more than 550 residents, while generating income for local families.

The Peace Corps Partnership Program accepts donations for Peace Corps volunteer projects worldwide. All projects funded through the Partnership Program are community-initiated and must include a 25 percent contribution from the community. No part of any donation is ever used for administrative expenses, as 100 percent of private sector funding is applied to community projects. A list of Peace Corps projects in need of funding can be found on the Peace Corps Web site at www.peacecorps.gov/contribute. . If you are interested in donating, you may reach the Office of Private Sector Initiatives at 1-800-424-8580, ext. 2170, or via e-mail at pcpp@peacecorps.gov.

This story has been posted in the following forums: : Headlines; Partnership Program