After a two-year stint in the Peace Corps ending in 1969, Tom Tryon eventually studied yoga under a man named Swami Satchidananda 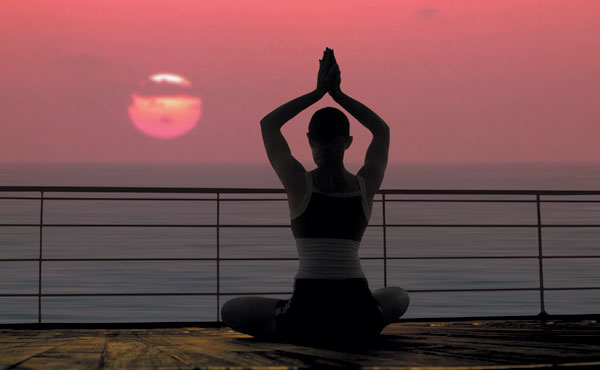 After a two-year stint in the Peace Corps ending in 1969, Tom Tryon eventually studied yoga under a man named Swami Satchidananda

Under a flag representing the various poses or ‘asanas,’ Jennifer Bohling stretches into the pigeon pose at a hatha yoga class at Downtown Fitness Center in Roseburg.
ANDY BRONSON/The News-Review

The blood rushes to the head of the yoga novice as he props himself upside down, supported only by his head, shoulders and elbows.

With toes pointed and reaching for the sky, his body quivers with tension as he fights the urge to expel his breath in short, sharp bursts.

Breathe deep and slow, urges his yoga teacher patiently. Clear the mind of worry and allow the stress of the day to flow from your body while you stretch your limbs.

People turn to yoga in search of peace. Although the practice has been around for millennia, appearing in its earliest forms sometime around 3500 B.C., it remains relevant for millions of people around the world who swear it improves health and relaxation.

"One of the principal things behind yoga is to quiet the mind down," says longtime yoga instructor Tom Tryon. "I always have a period of deep relaxation at the end" of a session, he says.

A yoga session may involve moving into a variety of positions, called "asanas," that stretch and strengthen the body. As the practitioner goes through the movements, it is also common to work on slowing down the breathing and focusing the mind.

Although it is sometimes still mistaken for a religious practice, most American yoga practitioners use it strictly as a means of enhancing self-awareness and physical well-being.

"The yoga in this country is essentially hatha yoga, (which is) physically based," Tryon says.

Pictures of yoga masters tied up in improbable positions tend to create another popular misconception -- that yoga is only for people with the native flexibility of a gymnast.

Nothing could be further from the truth, says Tryon. He teaches yoga at the Umpqua Valley Arts Center in Roseburg and encourages his students to move at their own pace, taking positions only as far as their bodies will allow them.

The positions have curious names, some evoking geometric shapes such as the "triangle," while others are named after animals or objects, such as "downward-facing dog," "lion's head," "cow face," or "plank." Benefits can be achieved across the prescribed range of motion, making the moves accessible to even the most inexperienced. Flexibility improves with practice.

Tryon has been a chiropractor in the Roseburg area for 25 years, so he sees the detrimental effects that inflexibility can have on the spine and other areas of the body.

"I've always used yoga to some degree with my practice," he says.

Tryon operates The Wellness Center with his wife, Bonnie, out of their home on Big Bend Road northwest of Roseburg. The scenic riverfront property is a serene retreat in its own right, offering the couple a commanding view of the river below them and the forested hills rising above.

He first became serious about yoga in the 1960s after taking a book about it with him on a backpacking trip. He practiced some of the moves on his trip and was instantly hooked.

"I came out of the mountains feeling really good, better than I've ever felt in my life," Tryon says.

After a two-year stint in the Peace Corps ending in 1969, he eventually studied yoga under a man named Swami Satchidananda, who spoke at the original Woodstock and is widely respected in the yoga community.

"I personally just find yoga is a great form of exercise," Tryon says. "The interest (in it) is clearly growing, which I think is great."


CHANCE TO SLOW DOWN
Tryon's infectious passion for the practice spread to one of his students, Debbie Lieberman, who now teaches it at the Downtown Fitness Aerobic Center in Roseburg that she manages.

"You can do yoga no matter what age you are," says the 44-year-old self-described fitness fanatic. "For years I've been a weight lifter and a runner and I ... tend to be kind of a Type A (personality), and this allowed me to slow down and be quiet."

Teacher Debbie Lieberman demonstrates a version of the cow-face pose at the Ananda Yoga studio at Downtown Fitness Center in Roseburg.
ANDY BRONSON/ The News-Review

Downtown Fitness offers classes five days a week year-round, and averages between 12 and 20 people per class. The classes are offered free to club members, but quite a few of Lieberman's students are non-members who pay to come to class.

When she first began the yoga program there almost two years ago, Lieberman ran her classes in the aerobics room at the center. However, she found the environment too bright and noisy for the kind of quiet contemplation she encourages from her students, so she moved them into a special studio downstairs last August. She calls the studio Ananda Yoga.

"Ananda means bliss, or blissful, and yoga means unity, so to me that's what yoga means -- a blissful union of the body and the spirit," says Lieberman, who describes her version of hatha yoga as a "flowing style."

"It's amazing in here," Hunter said recently as she stretched out before class. "It's just so relaxing and peaceful."

The smell of Nag Champa incense and the sounds of Eastern music provide a stark contrast to the brightly lit world of weight lifters above the studio. One by one, Lieberman's students descended the stairs to trade in the mirrored walls and peppy disco music for a dimly lit, low-ceilinged room adorned with colorful tapestries of various yogic signs and images.

"After leaving my middle schoolers this is a nice way to relax and help me focus," Hunter says. "It just puts me in a better mood."

Lieberman leads her class through a ritual that is as easy on the mind as it is demanding on the body. A room full of human pretzels bend and contort their limbs, while looking strangely serene about the whole process.

Sally McKain, a 55-year-old case manager for the Department of Human Services, exudes calm as she describes the benefits of practicing yoga in Lieberman's class.

"This does bring the strength to your core muscles," she says in a voice as soft as a sigh. "You breathe differently when you're sitting straighter."

The improvement to her posture is one of the things that keeps McKain coming to class five days a week. She hopes to someday convince her husband to come, a feat Hunter has already managed to do.

"We have a lot of men that do it," Lieberman says. "I would say in our busiest classes ... up to a third of the participants are men."

The potential benefits of the exercise are universal, she says, whether people need to relax and stretch out after leaning over a desk all day, or whether they are working in the mountains, or lifting and playing with children.

Umpqua Community College instructor Patricia Wilson deals mostly with an older clientele, although the class is open to people of all ages.

"Most of my people are seniors, so a lot of emphasis is put on them knowing their bodies and knowing what their limitations are," Wilson says. "When your body starts talking to you and tells you you need to stop, that's exactly what you need to do."

Wilson herself is in her 60s, and finds that yoga helps provide her with the energy she needs to teach line dancing, exercise and yoga classes more than 15 hours per week.

"I'm just 10 times more flexible than I was 10 years ago," says the Sutherlin resident. "I'm only my age in biological years, I'm nowhere near my age in physical abilities."

All three teachers say interest in yoga is growing in Douglas County, as people try to step away from the frenetic pace of modern life.

"I find it relaxing," Wilson says. "When you get in touch with your relaxation process ... then you're working on your inner being."


* You can reach reporter Christian Bringhurst at 957-4213 or by e-mail at cbringhurst@newsreview.info.

This story has been posted in the following forums: : Headlines; Yoga