It was the dawn of the Great Society, the age of VISTA and the Peace Corps 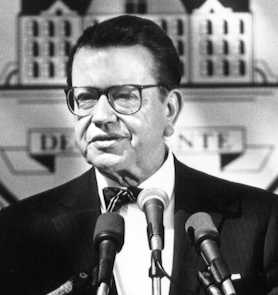 It was the dawn of the Great Society, the age of VISTA and the Peace Corps

The promise of campaign cash for legislative votes, the heavy-handed gambling and payday loan lobbies and the pork barrel politics that Paul Simon wrote of in 1964 remain familiar themes in the Illinois of 2004. So, what's really changed? Maybe, it's us.

In 1964, the Beatles dominated the airwaves and the economy was humming. America was stunned by the assassination of JFK, but inspired by his idealism. It was the dawn of the Great Society, the age of VISTA and the Peace Corps. We believed that we could make a difference and that government was a tool for change.

Somewhere along the way, after Vietnam, Watergate and a litany of Illinois scandals, we lost that idealism. Over the years, we've grown cynical and disengaged. While 73 percent of Illinois voters participated in the 1964 election, less than 53 percent of us bothered to do so in 2000. Seventy-six percent of Americans trusted government in 1964, but only 40 percent of us had that kind of faith by 2002. Few still believe that government has much to offer.

Paul Simon never stopped believing. He believed that government mattered, that public service was the highest calling and that citizens had an obligation to participate. Paul wasn't na<0x00EF>ve, and he certainly wasn't apolitical, but he had an unshakable faith in the power of an inspired citizenry.

Paul wrote about corruption, not simply to expose it, but to spur reform. Illinois' newly minted ethics legislation is a portent of change, but a true transformation of Illinois government will require the public's involvement. Paul Simon had no time for cynicism or apathy and neither should we. The people of Illinois owe it to his memory to stand up, speak out and make a difference.

Cynthia Canary directs the Illinois Campaign for Political Reform, a nonpartisan public interest group that seeks to cut the influence of money and increase public participation in state government.

This story has been posted in the following forums: : Headlines; Politics; Speaking Out; History