The Presidential candidate who proposes creation of a new Department of Peace in the presidential Cabinet, is a man with a mission 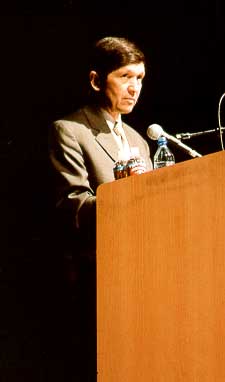 0,2260751.column?coll=bal-oped-headlines, The Presidential candidate who proposes creation of a new Department of Peace in the presidential Cabinet, is a man with a mission

On the edge with Dennis the Menace
Jules Witcover
Originally published Jan 16, 2004


Jules Witcover
DES MOINES, Iowa - To the other Democratic presidential candidates competing in Monday's Iowa precinct caucuses, Rep. Dennis Kucinich of Ohio may seem to be a real-life Dennis the Menace. A distinct long shot, he asks embarrassing questions of the other contenders in their seemingly endless debates and generally is regarded by them as a pesky irrelevance.

But the one-time boy mayor of Cleveland, who proposes creation of a new Department of Peace in the presidential Cabinet, is a man with a mission. He relentlessly holds the feet of his fellow Democrats to the fire on the issues of why and how President Bush led the nation into war in Iraq and when and how American forces should be extricated from it.

In every debate, his simple slogan "U.S. out, U.N. in" resonates with the party's most liberal activists, but sounds to other Democrats like chalk screeching down a blackboard. Mr. Kucinich unabashedly has made himself the man who came to dinner and wouldn't leave.

He is not the first long-shot candidate who has injected himself into presidential politics with few perceived qualifications for running the country or garnering the popular support to seriously contend for his party's nomination.

But few others have demonstrated the brashness and tenacity in doing so as has Mr. Kucinich. When moderator Ted Koppel of ABC News in one debate pointedly pressed him on getting out of the race as a hopeless case, Dennis the Menace brushed him aside with such alacrity that he drew cheers from the audience.

The presence of such long-shot candidates routinely draws press complaints that they clutter up serious issue discussion and needlessly take time away from the candidates running far ahead of them in the polls. But Mr. Kucinich's prodding of the others on the war has been a voice of Democratic conscience on the issue.

Democratic candidates such as Sens. John Kerry of Massachusetts and John Edwards of North Carolina and Rep. Richard A. Gephardt of Missouri hedge their positions on Iraq. Former Vermont Gov. Howard Dean defends keeping U.S. troops there for a time. But Mr. Kucinich minces no words: The troops never should have been there in the first place and the time to get them out is now.

Long before President Bush moved against Saddam Hussein, Mr. Kucinich was roundly denouncing unilateral, pre-emptive war as unconstitutional and unwarranted. For more than a year before the war, he was stumping the country as the self-proclaimed leader of a small "peace caucus" in Congress.

Those who hope or pray that the man short in stature but long in determination will fade away in a trail of weak caucus and primary showings are likely to be disappointed. Mr. Kucinich reports he has raised about $5.5 million in campaign contributions and has just received a $3.3 million cash infusion through the federal campaign finance subsidy system - enough, he says, to carry him clear to the Democratic National Convention in Boston in July. "I'm going all the way in this," he says.

Running a shoestring campaign until now, Mr. Kucinich has begun a few TV commercials in Iowa, and several billboards touting his candidacy have sprung up around Des Moines. At the same time, he has made the most of his scrappy debate participation to garner additional TV interviews and keep the Iraq war issue on the front burner - to the continuing discomfort of those fellow Democrats in Congress who, unlike him, voted for the Bush war resolution.

Mr. Kucinich's major target, however, remains the president. In the final Iowa debate Sunday, commenting on Mr. Bush's plan to send a man to Mars, his quip - "Maybe he's looking for the weapons of mass destruction still" - drew one of the heartiest laughs from the audience.

But unlike many other presumptive "sure losers" of past presidential races, Mr. Kucinich also is making a contribution of substance to the 2004 election dialogue. He is reminding the other candidates that running for president should be something more than a contest of style, looks and charisma, little of which he has.

This story has been posted in the following forums: : Headlines; Politics; Election2004; Peace Making