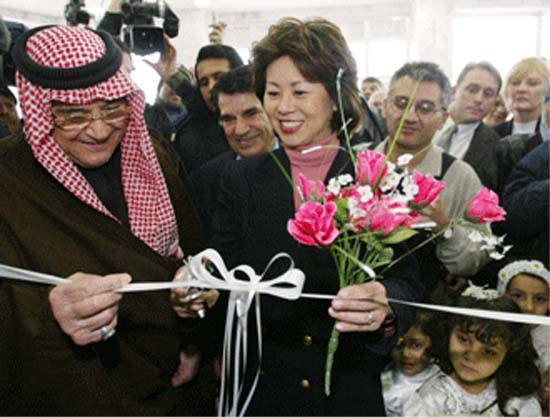 Her first visit was to inaugurate the opening of the Baghdad Employment and Training Center, operated by the restored Ministry of Labor and Social Affairs and provides services and benefits to Iraq’s most vulnerable citizens. Under the former regime of Saddam Hussein, the Ministry operated the prison system. Now, for the first time, the Ministry is establishing employment and training centers throughout Iraq, charged with providing services to displaced workers in the nation’s largest populated cities.

“I am so pleased to be in Baghdad to inaugurate the opening of the Ministry of Labor and Social Affairs’ Employment and Training Center. The U. S. Department of Labor has worked with our counterpart in Iraq early on to help Iraqis establish a new Ministry. We hosted Iraqi officials to the United States in the last few months that included visits to America’s $9.5 billion publicly funded workforce investment system, the One-Stop Career Centers. To be able to be in Baghdad and finally meet the Iraqi staff and tour the facilities of this Ministry is a very memorable experience for all of us. The new facilities, the classrooms and the computer lab will help Iraqis gain marketable job skills and access new opportunities for lifelong learning,” said Secretary Elaine L. Chao. “The Iraqi Ministry staff is proceeding to set up employment and training centers all over the country. Increasing employment is a key element to stabilizing democracy in Iraq. Already, hundreds of thousands of Iraqis have been registered for jobs and training and more than 25,000 Iraqis have found new jobs from the efforts of this Ministry.”

It was just last October 27, 2003 tat Minnesota Senator Norm Coleman and Sec. Chao led three Iraqi labor officials on a tour of the Minneapolis Workforce Center on Lake Street, as part of a ten-day tour of American job placement and job-training sites arranged by the U.S Dept. of Labor to assist Iraq in developing its first labor department in more than 20 years.

The Ministry’s career professionals administer the private social security pension fund and welfare program, giving the nation’s children, elderly, widows and disabled the financial means to survive. Services and benefits offered in the Kurdish regions mirror those offered in Baghdad.

Like many government buildings in Iraq, the ministry’s administrative facilities were burned and looted shortly after the war ended. The CPA worked with international NGO’s to complete the renovations of the ministry.

“In looking at the young faces around me, I feel a sense of confidence and optimism that these children will now grow up to see a brighter future of peace and opportunity in a new Iraq,” said Secretary Elaine L. Chao. “I bring the friendship and greetings of not only the young students of Indian Hills Elementary School, but our President George W. Bush and the American people.”

Sec. Chao also toured the Baghdad Police Academy where she met with trainers and cadets. The Police Academy is one of the largest job training programs currently in Iraq.

Secretary Chao stated, “Jobs and training are vital to a new Iraq. The police are the first line against chaos in a peaceful society. The work of the Police Academy in Baghdad is essential to ensuring that ordinary Iraqis are able to go about their daily lives without worries in a new Iraq. The F.O.P. represents the finest in law enforcement in America, and President Canterbury’s announcement today that the organization will send F.O.P. officers to help work with the Iraqi police force will help to ensure a strong and just police force in a new Iraq.”

Many Iraqis have stepped forward to secure their country by serving in the Iraqi Police Service, the Border Police, Iraqi Civil Defense Corps and the Facilities Protection Service. Currently, about 170,000 Iraqis are working as part of Iraqi security forces, more than the number of Coalition troops serving in Iraq. For example, more than 1,000 new Iraqi Army soldiers are already on duty, assisting Coalition Forces in securing the new Iraq. Thousands more are either in training or awaiting the beginning of their training.

This story has been posted in the following forums: : Headlines; Iraq; Peace Corps Directors - Chao

I am an unemployed, mature person (Grandmother)who would like to go to Iraq and work in the orphanges. The U.S. Government has been the cause of so many children losing their families in Iraq, and I am would like to dedicate my life to helping those homeless children and I'm willing to go there and work as a houseparent or in capacity needed.

Can anyone provide me information on the local orphanges and who heads those in Iraq? I'm hoping an Iraqi will see this and contact me.
My email is: ygreenbauer@yahoo.com.

Thank you for your assistance.