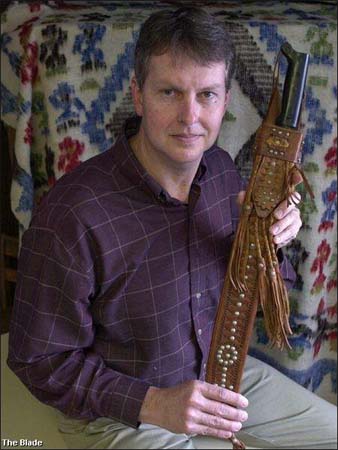 Caption: Kim Shoup, 49, remains one of the few community college graduates to have volunteered for the corps.
( THE BLADE/LORI KING )

It isn’t every day that a farmboy from Williams County finds himself living in Guatemala. And yet, there was Kim Shoup.

Not long after getting an associate’s degree in agribusiness from Northwest State Community College, the Montpelier, Ohio, native set off for a village in Guatemala to help farmers with animal production as part of the Peace Corps.

"It was a very simple life. I lived in a concrete house with a tin roof," said Mr. Shoup, who didn’t know a lick of Spanish before he left. "I think about it quite often."

That was more than 20 years ago. Today, Mr. Shoup, 49, remains one of the few community college graduates to have volunteered for the corps.

Peace Corps officials hope that is about to change.

The group founded by President John F. Kennedy in 1961 to bring needed skills to other countries and promote cultural exchange and understanding will kick off a recruiting campaign Feb. 10 specifically targeting community college graduates.

Currently, less than 5 percent of the corps’ 7,533 volunteers in 71 countries do not have a four-year college degree. Part of the reason lies in the nature of the program, said Scot Roskelley, a spokesman for the organization’s Chicago region, which includes Ohio and Michigan.

"We are in all of these countries at the invitation of those countries. They identify the kinds of things that they’re looking for," he said. "Most of the requirements that they set forth require people to come in with four-year degrees."

Still, there are certain fields - such as health education, business, computer science, and agriculture - that could make a good match for community college graduates, although in many cases the volunteer must have work experience, Mr. Roskelley said.

The corps’ recruitment campaign comes at a time of increased need for volunteers, who must make a 27-month commitment, and when some states like Colorado have nearly tapped out their four-year colleges. That is not the case in Ohio, where recruiters only have time to visit about 50 percent of the four-year schools, Mr. Roskelley said.

So while the push here will not be as aggressive, he said community college students are welcome at upcoming Peace Corps recruiting visits to Bowling Green State University on March 31 and April 1 and at the University of Toledo on April 1 and 2.

Mr. Shoup, who now works at the Williams County Health Department, said he thinks the focus on community colleges will be great.

"As far as the technical part, I think the associate’s degree prepared me well," he said. His tasks in Guatemala included vaccination programs and veterinary work.

Angie Williams-Chehmani, 37, who had spent three years in Morocco with the Peace Corps beginning in 1997, said a volunteer’s attitude is far more important than his or her degree.

The journalism and composition teacher at Owens Community College, who taught business English in Morocco, had a master’s degree in English at the time, and is working on a doctorate at Bowling Green State University.

This story has been posted in the following forums: : Headlines; COS - Guatemala; Community Colleges