What in the world do you bring for your Peace Corps service? 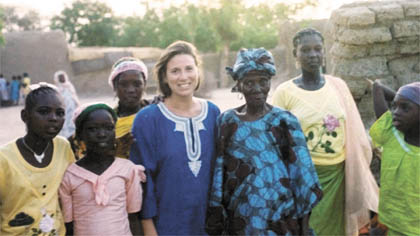 What in the world do you bring for your Peace Corps service?

What in the world do you bring for your Peace Corps service? You can't pack up your entire apartment. The microwave is too big. The fridge is too heavy. The bed is too big and too heavy. So where do you begin? Here are some handy tips on how to pack for a two-year stay abroad:

How much should I bring with me? For starters, pack light. People never really know what they are going to need until there. So, get there, said Scot Roskelley, public affairs specialist in the Chicago regional office. "People will end up sending you things that you need, or you can get them there. Err on the side of packing light," he said.

Will Peace Corps tell me what to bring? Once a country is selected, applicants receive an invitation packet that includes a packing guide, which varies by country, said Roskelley. "Some of the areas are tropical and some areas get real cold. They will have to bring cold-weather clothes in Mongolia. Women are not going to wear shorts in some countries. Or there may be some custom that women don't wear pants or jeans, and that will be addressed in the packing list."

Should I pack anything odd? If something special is needed for a particular country, that will be stated in the invitation information. For example, Mindy Ballinger received her packing list, which told her to bring a flea collar and a garlic press. "I have no idea why they wanted me to bring a garlic press," she said. "Maybe to help repel mosquitoes?"

What about technological gadgets, like a laptop computer? Roskelley said local electricity is not as dependable as in the United States, and it may fry equipment, he said. "The people in these countries survived just fine on what they are able to buy locally. You, too, will be able to survive buying locally. Don't feel like you need to pack everything. There are things to buy locally."

What about stuff to read, or music? Many Peace Corps offices in country have libraries with books and music left behind by volunteers. "Once you're in country, there's a lot of exchanging of books and CDs," Roskelley said. "People leave that stuff behind."

What about mementos? "Absolutely. Bring photos of your family, your home," Roskelley said. "People want to see that." Lavers plans to take Bummy, her stuffed cat. "It's gone everywhere with me," she said. "It's a perfect pillow when you are in the plane."

Moms across America worry about their "babies" who chose to serve in the Peace Corps.

After all, moms are separated from their sons and daughters by thousands of miles of land and sea, away from America living in some rural village, not knowing what's happening.

Safety is a concern. That's why Peace Corps established an office of Safety and Security in Washington, D.C. Safety training begins before applicants swear in as volunteers and procedures are in place to protect volunteers against individual incidents and country-wide catastrophes.

Below are statistics published by Peace Corps:

• Although the statistics sound grimacing, a survey conducted in 2002 of volunteers' perception of safety show that 97 percent of the volunteers said they felt a range of "adequately safe" to "very safe" where they live, and 99 percent where they worked.

The cost of serving

How much does it cost to join? There's really no out-of-pocket cost to join the Peace Corps volunteers, said Scot Roskelley, Peace Corps spokesman. "Their living expenses are paid; their health and dental care is paid and at the end of their 27 months of service, they get $6,075. So everything is taken care of."

What about my student loans? If you have student loans, many of them can be deferred, so payments will not be mandatory while serving as a volunteer. "In fact, Perkins Loans can be forgiven at 15 percent for every year served," Roskelley said. "Most of the others can be deferred. We ask the applicant to handle it."

I racked up quite a credit card bill. Can that be deferred? Any kind of debt outside of student loans must be resolved before entering Peace Corps, Roskelley said. "They need to have it paid off, or they need to have someone take care of it for them."

What about my house and my car? The house needs to be rented out to someone else, managed by someone other than you or sold. Same goes for the car. Someone else must take responsibility for those items while you are away.

Couldn't I earn more money in those two years than what Peace Corps offers? "It's like a diploma," said Tom Bonnenfant, an Indiana University graduate student and Peace Corps recruiter. "Financially, you don't have any money in the bank, but it opens a lot of doors and you learn a lot."

This story has been posted in the following forums: : Headlines; For Prospective Volunteers

I am 18 years old and wish to join the peace core. How do i go about doing this?

For answers to your question see the
segment CONTACT PCOL.