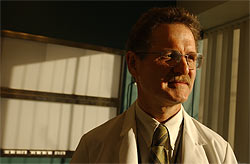 "I like TB," says the Sacramento County public health nurse, smiling thinly, of his fatal attraction. "It is the most dreaded disease of the ages."

TB, as everyone knows, is a highly contagious, airborne bacterium that corrodes the lungs and, left untreated, is suffocatingly fatal. In its day, TB claimed its toll of victims. But that seems centuries ago, before antibiotics and the advent of "ER."

Nowadays, TB's once-noxious sputum has been relegated to a golden age of consumptive British poets and swooning divas in Italian opera. But TB is still alive. Still singing at the top of its inflamed lungs.

On an average day, Brinton sees 10 to 35 patients. (The clinic itself handles upward of 22,500 patient visits a year.) These are people who have tested positive in a skin test and have had a follow-up chest X-ray. Even an innocuous exposure to TB bacteria can trigger a positive skin test. Only a chest X-ray provides conclusive evidence of lung infection.

The majority of these patients are refugees and immigrants from Southeast Asia or former states of the Soviet Union, from Mexico or Bosnia, from Africa or Central America, where germs are rich and health care is dismal.

Tuberculosis can remain dormant in the lungs for years, before the disease becomes active and the ill, spewing host contagious.

These patients are poor, confused, often distrustful of governmental agencies. Most don't speak English. Communication is vital, since the ability to understand and follow instructions is critical in the successful treatment of active tuberculosis.

One by one, Brinton sits with them in an examination room. He puts their X-rays up on the light box. He studies the landscape of their lungs. Most of the time, the lungs are clear. But sometimes they're speckled.

"Yes, I'm the bearer of bad news," Brinton says. "But I also tell them (the patients) that they're in the right place, that they will get the best treatment here."

Brinton is well-suited for his job. He is calm, reassuring, nonjudgmental. He speaks five languages - French, Vietnamese, Russian, Spanish and fluent compassion. Plus, he can read X-rays like an eye chart. Detect shadings, shadows, cavities, these colonies and pockets of swarming TB, what in the business are known as "infiltrates." He is rarely wrong. Though urgent, his is an anonymous diagnostic.

"He is one of those unsung heroes in the county," says Dr. Glennah Trochet, county public health officer. "I have always been impressed by his dedication to the people he serves, his willingness to learn their cultures and languages. It results in better medical care.

"I think he has a gift. And it takes a gift to explain the issues to patients and to get them to take their medicine."

Now, on a wet, drizzly day, Brinton is sitting in his office in the Chest Clinic. There is a metal desk, a computer, a light box and photos of his family.

There is also a picture of Trinh in a bamboo frame. The black-and-white photo was taken in 1969, when Brinton, a conscientious objector in the Vietnam War, was working in a hospital in Quang Ngai, just south of Da Nang. Trinh is 6 years old. She has clipped bangs, a dreamy expression. She is resting her head against a tropical palm tree.

Looking closer, one notices that Trinh is missing her right leg, just beneath the knee. That she is wearing a prosthesis. That she is a tiny victim of war. "I always assumed she died," Brinton says. "Not being able to run back then in Vietnam was a death sentence."

In fact, even hobbled, Trinh managed to survive. Six years ago, Brinton gladly heard she was still in Vietnam, and a mother. Still, for all those years, he kept her photo. It is not a tainted X-ray. In many ways, her lustrous soul seems exposed on the office wall.

Brinton is a boyish 61 years old. He has curly, light brown hair, a brushy mustache. He is wearing glasses, a white medical jacket, a shirt and tie. A badge that identifies him as a family nurse practitioner. Often he has a quizzical look. He is deliberate, fastidious, even fussy. He takes his job deadly seriously.

None of this is to suggest that residents of Sacramento County are at any risk of TB. "For the general public, in the ordinary course of events, there is a very low risk of contracting tuberculosis," Trochet says. "It is a disease of poverty, of crowded conditions."

Brinton was born in Philadelphia, to a Quaker family. His father taught English at George School, a high school for Quaker students. Brinton later attended Haverford College. In 1964, he joined the fledgling Peace Corps and taught English in Africa.

Upon his return, the war in Vietnam was escalating. Brinton qualified for conscientious objector status. Working with the American Friends Service Committee, he was assigned duty in a Vietnamese hospital, which provided prostheses and physical therapy. Brinton purchased medical supplies and worked as a translator. He was stationed there from 1966 to 1970.

Back home, he met and married his wife, Claudia Krich. The couple went back to Vietnam and became administrators at the same hospital in Quang Ngai, working there until the government's fall in 1975.

Brinton then went to nursing school and earned a master's degree in science. He applied for jobs in California (Krich is a native of Los Angeles), and in 1981, he accepted a position with Sacramento County. He worked in various public health clinics before being assigned full time to the Chest Clinic, working with Dr. Luis DeSouza.

Brinton, though social-minded if not idealistic, is not a person given to making pious pronouncements. Of his Quaker upbringing, its relation to his career choice and world view, he merely allows, "I believe in the importance of nonviolence, of doing something helpful in the world. But there is no creed as such."

On another day, Brinton consults with a patient. The man is in his mid-50s. He is haggard-looking, with a knit cap pulled down to his brow. He has a history of drug use. "But I never put any drugs in my arm," he assures. He also boasts of his otherwise superb health, offering, "I bet I can get down on that floor and give you 50 push-ups!"

He can't quite fathom having tuberculosis, though he was recently exposed to a woman with an active case of TB. After a positive skin test, he has had a chest X-ray. Now comes the moment of truth. The man is visibly upset, nervous, worried that his 10-year-old son's health may be endangered.

Brinton puts up a set of chest X-rays. He takes out a small, telescopic pointer. He examines the X-ray, noticing some filmy streaks in the man's left lung.

"Did you ever have a lung disease?" he asks.

"No," the patient says. "But I was in a car wreck once." The man reveals that he is a smoker.

Brinton puts up another set of X-rays. These, taken from a recumbent position. He peers closer. And his demeanor brightens. Everything is OK. No TB.

"You mean, I'm OK?" the man says, his relief palpable. "I was sweating this out. You mean I don't have TB!"

Brinton assures him. No, you don't have TB.

Later, back in his office, Brinton notes that a radiologist will scan all the X-rays, just to be doubly sure. This patient will also be given medication to cleanse his body of any bacteria. But first, he will be given a blood test to check on the condition of his liver.

In the case of a patient with active TB - an almost weekly occurrence at the Chest Clinic - the protocol is exhaustive. The patient must submit to Daily Observed Therapy (DOT), in which a visiting public-health nurse observes and logs the ingestion of daily medication. This regimen can last as long as a year.

There is also a periodic re-taking of X-rays, which, invariably, reveal the cloud of TB growing vague, faint, indistinct, gone. Brinton is there every step of the way, a fresh breath of encouragement.

Brinton and his wife live in Davis. Krich is a second-grade teacher. The couple have two grown daughters. In his free time, Brinton enjoys woodworking and fiddling with digital music. This summer, after nearly 30 years, he and Krich plan a return trip to Vietnam. Maybe Brinton will see Trinh, the girl who remains such an image in his life.

"I'm not enthralled," says Brinton, speaking of his fascination, his dedication to the treatment of tuberculosis. "TB is one of the world's major health problems. By luck or circumstance, I fell into this career, which has worldwide significance. I'm doing my part on the local front. TB is often misunderstood. It can be cured. There is a great deal of hope."

This story has been posted in the following forums: : Headlines; Infectious Disease; Tuberculosis