Teresa Kerry says America can win the war on terrorism by presenting a different, kinder face to the world, one exemplified by the friendly optimism of a Peace Corps volunteer 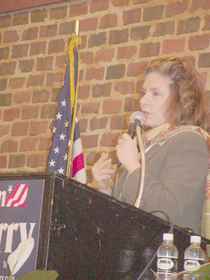 Teresa Kerry says America can win the war on terrorism by presenting a different, kinder face to the world, one exemplified by the friendly optimism of a Peace Corps volunteer

SAN FRANCISCO - Teresa Heinz Kerry, wife of Democratic presidential candidate John Kerry, kicked off a three-day campaign swing through California on Tuesday by criticizing the "cynicism" that she said pervades the Bush administration.

"To me, cynicism is the lethal force that destroys optimism, candor, tolerance, enthusiasm - all the great qualities that make Americans American," Kerry told nearly 400 supporters who gathered for a luncheon speech at the Merchants Exchange building.

She argued that the only way America can win the war on terrorism is to present a different, kinder face to the world, one exemplified by the friendly optimism of a Peace Corps volunteer. U.S. leaders need to go to the United Nations and "invite people in to be part of a large dialogue and want seriously to be back in the community of nations."

Kerry plans to criss-cross the state in the final week before the March 2 primary on "Super Tuesday," when California will join nine other states in choosing delegates for the Democratic convention.

With so much at stake, the candidates have been on a mad dash to spend as much time as possible in each location. John Kerry will arrive in California near the end of the week. Sen. John Edwards is scheduled to spend today in the Central Valley and Thursday in the Bay Area.

Edwards plans an aggressive push here despite a Los Angeles Times poll released this week that found Kerry the clear front-runner in California, with 56 percent support among likely voters, compared with 24 percent for Edwards.

The Kerry campaign began gearing up its California operations several weeks ago, opening headquarters in Northern and Southern California with a full-time staff of 25 people.

Before her luncheon speech, Teresa Heinz Kerry and Rep. Tom Lantos, D-San Mateo, appeared at a Pier 22 rally flanked by more than 50 firefighters and labor leaders.

Standing in front of a fireboat, leaders of the 30,000-member California Professional Firefighters announced their endorsement of Kerry.

Lou Paulson, president of Contra Costa County Professional Firefighters, noted that cities such as Richmond have had to lay off firefighters while the federal government spends millions of dollars in Iraq. "John Kerry understands where our nation's priorities belong," he said.

San Francisco District Attorney Kamala Harris introduced Teresa Kerry at the luncheon, noting that Kerry was born in Africa and participated in civil rights marches against apartheid in South Africa in 1957, 1958 and 1959.

The Kerrys have been married for eight years. Both have children from previous marriages. Teresa Kerry said one of the things missing from many American homes today is the "time to sit and talk about life, sit and talk about issues."

To promote volunteerism, she noted that her husband has proposed that students could earn four years of college tuition in exchange for two years of national service. He also proposes to require mandatory national service for high school students.

After her remarks, Kerry responded to President Bush's announcement Tuesday that he will support a constitutional amendment banning gay marriages. She called it "divisive politics. It's campaign politics."

John Kerry has said he would vote against the amendment and that he believes such decisions should be left up to the states. He supports civil unions for gays and lesbians. Kerry was one of only a handful of senators who voted against the federal Defense of Marriage Act, which defines marriage as between a man and a woman.

Asked for her personal views on the subject, Teresa Heinz Kerry said she agrees with her husband's position and noted that she has friends who have gay children.

Some have viewed Teresa Heinz Kerry as a powerful weapon for her husband because of her huge personal wealth, but she downplayed that idea Tuesday.

"I've always said I do not believe in spending personal money for a campaign," she said. "I don't. I haven't. I've spent $2,000 toward my husband's campaign, like everybody else. "

"The amount of money that will be spent coming against us in the fall cannot be beaten with equal amounts of money, even if we had it.

"It's going to have to be beaten with people, with beliefs, with ideas and ideals, and with lifting the quality of the campaign and giving people hope."

This story has been posted in the following forums: : Headlines; Politics; Election2004 - Kerry

I don't see George Bush ever being sincerely enthusiastic about the Peace Corps and what it stands for. Also, no one in the world community would ever believe him. I would have said the same thing several months ago.
John Kerry gets my vote.