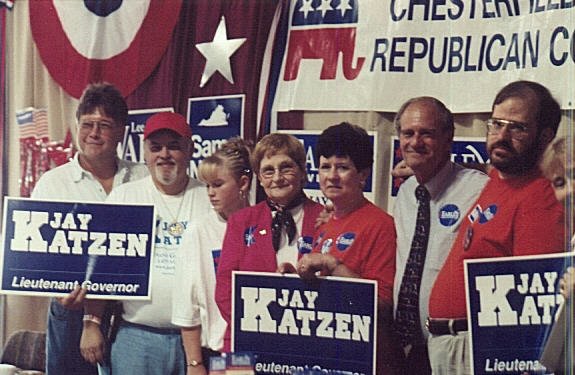 It was 9 a.m. one day last June, and the future leaders of America were dragging. The high school seniors had used their Girls State retreat at a central Virginia college as an excuse for a night of summertime revelry. Jay Katzen wasn't down with that.

"They said, 'Hey, we're here. But we partied last night, and we probably won't be able to stay awake very long,' " Katzen recalled.

The GOP candidate for lieutenant governor -- a former U.S. diplomat in Africa -- challenged the groggy girls, asking them to imagine what their sisters in Mali were up to when the Virginians' alarm clocks woke them. How about no alarm clock because there's no electricity? he asked them. How about having no bed to yourself and no choice in whom you marry? How about a slug of brackish water lugged from a dirty well?

"I felt I reached them," Katzen said. "A couple of them stood up and said, 'We didn't know that.' Fair enough. Now they do."

Both supporters and detractors say Katzen -- a former Princeton cheerleader who has become one of the state's most conservative legislators -- is running a campaign that reflects his values. He is part missionary, part politician -- a sometimes-combustible mix.

Katzen has sought to use his overseas experience to vault above the fray of Virginia politics. A campaign video touts him as a "World class leader, right here at home." Even in college, when contemporaries were preoccupied with carousing, Katzen was thinking about the world's underprivileged.

"I really had a hard time at that age relating to that, but he seemed sincerely concerned -- 'How are these poor people in Third World countries going to make it?' " recalled Jim Farrin, a New York consultant who roomed with Katzen at Princeton in 1958.

Katzen's enthusiasm sometimes makes people skeptical, Farrin said, but his outgoing personality and strong faith make him "ideally suited" for public service, just as he seemed made to head the Tigers' cheering squad four decades ago.

"They're looking for the angle. There's no angle," Farrin said of skeptics. "The angle is: How can I help you more and serve you better?"

On a trip to Zaire seven years ago, Katzen watched Rwandan refugees stream into teeming camps around the city of Goma, many sick and dying of cholera and yaws, a tropical disease that deforms victims' skin and joints.

"We ministered to the people. We gave them shots, and we got shot at," said Katzen, who was on a mission run by Operation Blessing, a Christian aid group founded by televangelist Pat Robertson. "I looked out at the valley of dying people and thought: There could be the next Mother Teresa out there, or the next Albert Einstein. I have made a commitment to live each of my days for those who are less fortunate, and that includes those in Virginia."

Yet back home, Katzen has managed to fire up his opponents.

He recounts, with a hint of pride, a list of insults once offered by Democratic Del. C. Richard Cranwell, of Roanoke.

"I was called an insidious, invidious word merchant defending the killing of abortionists and, as the Serbs, bent on Balkanizing Virginia's public education," Katzen said. "My wife of 38 years said all these years combined she hasn't called me all those things. But she lies."

Opponents also point to Katzen's "Virginia Is Not Vermont" campaign theme, printed on bumper stickers, and, until recent days, prominent on his Web site, as an example of Katzen's proficiency in hardball politics. Katzen, a state delegate from Fauquier County, said he evoked Vermont to differentiate himself from Democratic lieutenant governor candidate Tim Kaine.

Other Katzen comments on gays have also infuriated activists. Katzen, for instance, was quoted telling Richmond's Style Weekly: "We recognize that homosexuality is a choice. It's a lifestyle, with public heath consequences."

David Scoven, executive director of Virginians for Justice, a Richmond-based gay-rights group, said Katzen has sullied his reputation by trying to use gays as political weapons.

"Calling Jay Katzen a bigot would be an insult to bigots. To be a bigot you have to be ignorant," Scoven said. "Mr. Katzen is an educated, smart guy. He knows better. What he does is worse than being a bigot because he calculates it."

Katzen said he would not back away from his positions but hopes to be able to concentrate on other issues, including "security, education, transportation and jobs."

Katzen says he would not support repeal of Virginia's sodomy law.

"To me that doesn't reflect bigotry," he said. "I was insulted when that was brought into this debate. I'm certainly not in any way bigoted, and I have a lifetime of experience to show that."

Katzen's most prominent legislative priority has been promoting what proponents call "school choice" and opponents call an effort to undermine public schools. A Katzen-sponsored bill that would give tax credits to people who donate to scholarships, including those for private and religious schools, has made headway in the state legislature.

"He pushed it very close to passing, and people thought that was impossible," said Michael Farris, president of Purcellville's Patrick Henry College, designed for young people who were home-schooled. Farris, himself a candidate for lieutenant governor in 1993, said Katzen has been tireless, and charming, in his push for "parental rights."

"I think the chief characteristic of Jay Katzen is that he's overwhelmingly nice, which is a little unusual for a person at this level of political life," said Farris, who noted that Katzen always converses in Romanian with Farris's 23-year-old daughter when they meet. She runs an orphanage in the country, and Romanian is one of Katzen's six languages.

Katzen has scored high with others in Virginia's conservative political circles. He was one of only five state legislators to get a grade of 100 percent on the Virginia Family Council scorecard of "family-friendly" votes, including those against abortion.

"He tends to align with our positions on a lot of issues," said Victoria Cobb, acting director of government relations at the Family Foundation, the Family Council's sister organization. Cobb replaced DeJarnette when she left the foundation to become Katzen's campaign manager.

Katzen said he wants to accomplish more than an agenda. He wants to do good.

"I believe faith, rather than good works, is the way to salvation," he said. "But good works are a responsibility to our fellow man. It's something I want to my dying day to be able to perform."

This story has been posted in the following forums: : Headlines; Senior Staff; Staff; Politics