While a college student in South Africa in the 1950s, Teresa Heinz Kerry frequently marched against apartheid. In those years, she says today, the United States in her mind was more a hopeful idea than a place, an idea embodied by the Peace Corps workers in Africa 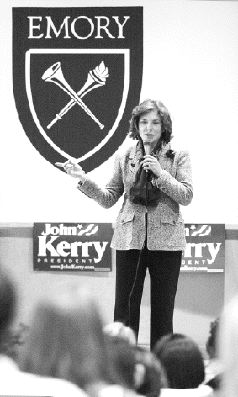 While a college student in South Africa in the 1950s, Teresa Heinz Kerry frequently marched against apartheid. In those years, she says today, the United States in her mind was more a hopeful idea than a place, an idea embodied by the Peace Corps workers in Africa

Heiress Teresa Heinz Kerry says what she thinks and means what she says, which could prove interesting if her husband makes it to the White House

On a sunny Southern morning about two weeks ago, the political stakes seem to rise by the hour. Yet on her visit here, the wife of Democratic presidential front-runner John Kerry insists on adhering to an unlikely political motto: Ask an honest question, get a really honest answer.

The question this day is from a college student, a member of the audience for Teresa Heinz Kerry's speech in an Emory University auditorium. Georgia law prohibits AIDS-prevention programs that encourage intravenous drug users to exchange used needles for new ones, the student informs Heinz Kerry. Does the candidate's wife have an opinion about that?

"What you're saying sounds like a little bit of a parallel to, 'You can't give them condoms because students shouldn't have sex.' Then they die of AIDS," Heinz Kerry, 65, replies in a soft voice that still bears traces of her Portuguese ancestry and African upbringing. "I keep saying that if you're really Christian, as you claim, you want an alive body that you can make into a Christian, rather than a dead one that's hopeless."

The assembled students erupt into loud laughter. Would Laura Bush have said something so impolitic? Would Hillary Clinton? Almost certainly not. As Emory students learn this day, the possible first lady fits no known mold.

There is her exotic upbringing in Africa, for starters. Her marriages, first to U.S. senator and ketchup heir John Heinz, then, when Heinz was killed in a plane crash in 1991, to John Kerry nine years ago. But as much as anything, it's her candor that sets her apart.

Heinz Kerry speaks five languages, yet in the plainest English dismisses Bush adminstration policies as "stupid." She is a devout Roman Catholic who is staunchly pro-choice. She is the heiress to the Heinz food fortune and a sophisticated philanthropist who once told a reporter she didn't "give a [expletive]" whether she was known as Heinz or Heinz Kerry. "Swearing," she added, "is a good way to relieve tension."

So far on the campaign trail, her candor, not to mention her intelligence and detailed grasp of the issues, has played to largely favorable reviews. "John Kerry's Secret Ingredient," declared a Newsweek headline last year. The London Observer recently called her "Kerry's Gold." "Mrs. Kerry is worth a fortune, but her real value to the campaign is her bluntness," said Time.

The candidate himself seems bemused.

"I'm not going to worry about it," the Massachusetts senator recently said. "She is my wife. She is who she is. I love her for her outspokenness, and I think it's kind of charming and honest. I think people like honesty."

Whether they like it or not, with Heinz Kerry, it can be difficult to avoid. After her Emory speech, another student got a firsthand taste. The student, a strapping young man, approached Heinz Kerry and said that a friend of his had something he wanted to know: If she was so rich, why didn't she give more money to the poor?

Heinz Kerry's smile faded, and her eyes flashed in anger.

"Does your friend know how much money I give to the poor?" she asked.

The student shook his head. The answer, Heinz Kerry said, was roughly $100 million a year, through her foundations.

Today, Heinz Kerry publicly muses how a self-proclaimed "Third Worlder," a "daughter of Africa," could end up where she has: an American heiress who runs billion-dollar philanthropies and is engaged in a race for the White House.

That journey, which further distinguishes her from any presidential candidate's wife who has come before, began in the 1920s, when her Portuguese father moved to the Portuguese colony of Mozambique to practice medicine.

Decades later, his daughter would draw parallels between him and Albert Schweitzer, another European physician who ministered to Africa's poor.

"He always greeted his patients with a hug and asked them about their lives," Heinz Kerry said in September while accepting the Albert Schweitzer award from Johns Hopkins University for her philanthropic work. "He liked to care for his patients, whether he was tending to them in the hospital, in the office, or under the pergola tree at our weekend cottage."

Heinz Kerry's own concern for children's and health-care issues took root in those years, as did her passion for preserving the environment.

"The African savanna was my earliest classroom," she said at Johns Hopkins. "It taught me that nature has rules, like not going swimming at dawn or dusk, when the sharks and crocodiles feed . . . and that life is much richer when you follow those rules. Crocodiles, though, are persuasive teachers."

Later, while a college student in South Africa in the 1950s, she frequently marched against apartheid. In those years, she says today, the United States in her mind was more a hopeful idea than a place, an idea embodied by the Peace Corps workers in Africa.

It was while she studied to be an interpreter in Switzerland (she later worked briefly at the United Nations in New York) that her notions of America became more tangible, there that she met John Heinz, who was attending business school in Geneva.

What her friends often describe as a storybook marriage began in 1966, when the couple settled in Heinz's native Pittsburgh. There, Teresa Heinz began raising a family and immersing herself in civic causes. John Heinz, who like his wife was a moderate Republican, was elected to the House of Representatives, then to the U.S. Senate.

Then, on April 4, 1991, a small plane carrying John Heinz collided with a helicopter over a Philadelphia schoolyard. Friends wondered how his wife could possibly bear up beneath her grief. But the months and years after her first husband's death might best illustrate Teresa Heinz's character.

She rejected pleas to assume her husband's seat in the Senate, saying she could best further John Heinz's legacy by taking charge of his public grants. Almost immediately, she threw herself into remaking the $1.2 billion Heinz family endowments. She began to direct the philanthropies toward complex problems involving children, health care and the environment, among others.

"It's truly miraculous," said Mallory Walker, a close friend. "If people understood both the courage and the vision she exhibited in the months after his death, they would have the highest regard for her. She has fabulous gut instincts, and I've seen it in a thousand different ways."

The luxury sedans line up along Peach Tree Battle Road, where in the gathering dusk well-dressed men and women make the walk up a long driveway to a mansion at the top of the hill. The home belongs to Rutherford Seydel, a prominent Atlanta lawyer, and his wife, Laura, the daughter of media mogul Ted Turner and tonight's host of a cocktail party for an environmental group.

But this is a presidential election year, and political gossip mixes with conservation talk like the whiskey with water. Laura Turner Seydel, who says she is an avid supporter of John Kerry, sips a glass of wine while remembering the brief political ambitions of her famous father four years ago.

"He [Ted Turner] wanted to run for the presidency, and we know why he didn't; because Jane [Fonda] said she'd leave him if he did," Turner Seydel said. "Then she left him anyway, so maybe he's a little remorseful."

Almost at that moment, a red van rolls up the driveway bearing another reluctant, or formerly reluctant, campaign spouse. Heinz Kerry has accepted an invitation to attend the event, and is embraced by Turner Seydel as she steps in the back door.

Heinz Kerry, dressed in a dark suit with a white rose pinned to her lapel, declines a glass of wine, sipping on water instead while she greets a series of well-wishers by the fireplace.

She is gracious but clearly exhausted. Except for a night or two at Thanksgiving, and a few more days over Christmas, she has been campaigning for her husband nonstop.

Such a medieval regimen was not in the cards when she and Kerry started dating in 1992. At the time, the divorced senator and decorated Vietnam War veteran had nearly sworn off dating and the tabloid attention that came with it.

Then Teresa Heinz started showing up at Kerry's senate office.

"They were just having a great time, being light with one another and physically affectionate," said Jonathan Winer, John Kerry's longtime legal counsel. "It made everybody feel good. I just saw a growing comfort."

"The world stage, you know, I was just scared of it," Heinz Kerry said in a brief interview with the Star-Telegram. "I mean, it's hard work. It's a huge responsibility; a loss of privacy, a certain kind of privacy, anyway. And it's not a normal life. I like to be normal."

Not until a year and a half ago did she make peace with her husband's desire to run.

"I was looking at the disasters around us," said Heinz Kerry, who changed her party affiliation from Republican to Democrat just last year. "Look at how we're being governed. It's pretty bad. And I can't afford to stop someone, my husband, from doing what he feels in his heart is right."

There likely have been second thoughts, such as when a Washington Post profile of John Kerry and his wife two years ago was the talk of the nation's capital. The Post described John Kerry's attempt to mollify an apparently high-strung wife, the number of John Heinz photographs placed around the family home and the wife's vivid description of Kerry's Vietnam War nightmares.

"I gave her some advice after that conversation [with the Post reporter], as did all of her friends," said Walker, a Washington, D.C., real estate executive who has known Heinz Kerry for three decades. "We told her she couldn't do that. . . . Her openness with a reporter with The Washington Post was a perfectly natural thing for her at the time. [But] you wouldn't see it happen today."

Oh no? Tell that to the students at Emory, where Heinz Kerry described critics as "bullies on the play yard," and added that conservative Republicans disliked her first husband because he wasn't a fundamentalist -- just a few more examples of a possible first lady determined to speak her mind.

The daughter of a prominent Portuguese oncologist, grew up in Mozambique, often accompanying her father on medical trips into the bush.

Worked as an interpreter for the United Nations in the 1960s. After marrying Heinz, raised her children and became active in civic affairs. After Heinz's death, took over the Heinz Family Philanthropies, and in 1993 created the prestigious Heinz Awards, recognizing outstanding achievement in the arts, public policy, technology, the environment and the human condition.