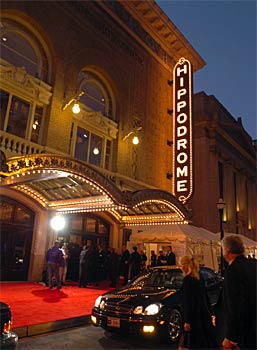 Baltimore’s glorious old Hippodrome Theatre has reopened with a touring company show of “The Producers,” months before the Kennedy Center mounts its production of the Mel Brooks musical. The biggest star of the evening was R. Sargent Shriver.

The former ambassador to France, vice-presidential candidate with George McGovern in 1972 and Peace Corps director, and husband of Eunice Kennedy Shriver, did a turn in front of the cameras, reminiscing about his father “taking me to the original Hippodrome back in 1920!”

Approaching 90 and sporting a cane, the still-handsome Sargent turned heads when he entered.