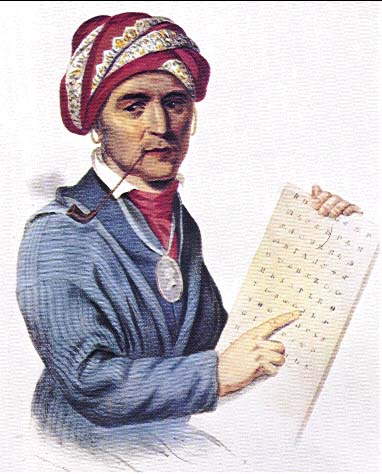 "I know what some of the signs in Tahlequah say now," Gilliam said.

Gilliam said she wanted to take the class -- which meets at 6 p.m. Thursdays at the Maxwell Park Library, 1313 N. Canton Ave. -- to keep some of her heritage alive.

"I am Cherokee, and it was a language that was dying," she said. "I wanted to help rejuvenate it for people."

Instructor Owen Scott said most of those who attend the classes are Cherokee or have Cherokee ancestry.

"Like a lot of Cherokees, I always wanted to learn," Scott said. "It's been a lifelong ambition."

The popularity of native languages has increased, he said, and class attendance can vary from six to 10 students one week to more than 25 the next.

Scott started out as a student in the class before the original instructor had to stop teaching. Now he uses a team teaching method.

In school, Scott said he learned Spanish, and when he was in the Peace Corps he learned Japanese and Thai, but still didn't know his own ancestral language.

"For me, it was part of my heritage that was missing," Scott said. "I find that a lot of people are like that."

That was the case for Betty Merryfield. In 2000, she started researching her genealogy and found out her grandfather was Cherokee.

"I decided to learn about my heritage, so I moved back to Oklahoma," Merryfield said. "I started taking history and language classes so then I could teach my grandchildren."

After learning more about the Cherokee people and discovering that her great-great grandparents came to Oklahoma on the Trail of Tears, Merryfield said she is proud of her heritage.

The classes teach the students more than just reading, writing and speaking Cherokee; they also teach about the tribe's culture.

Gilliam said she took Spanish in high school, and the Cherokee language is much harder to learn.

"Spanish is a Latin-based language, like English," she said. "Cherokee is Iroquois-based. It's an entirely different perspective and concept. You're learning about a different culture."

Valerie Phillips, another student, said learning the language is important to keeping the culture going.

"I learned Spanish before I learned my own language," Phillips said. "Language really has a lot to do with culture."

This story has been posted in the following forums: : Headlines; Indian Issues