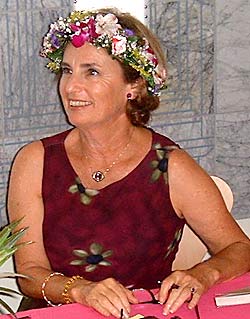 From the Strange But True file comes this obscure little factoid from the Los Angeles Times bestseller list: In 1957, Jack Kerouac's "On The Road" finished at No. 8, one slot behind a book called "Gidget, The Little Girl With Big Ideas," by an obscure screenplay writer named Frederick Kohner.

Information: Call 888-RJ-SURFS, or visit www.ronjons.com
Poll a random sampling of readers over which novel left the lasting impact, and it's a no-brainer for beat writer Kerouac. But lately, the subject of Kohner's book -- his daughter, Kathy Kohner Zuckerman, aka Gidget -- is making a persuasive case for a second look.

"It was the first book about surfboard riding, and the Southern California lifestyle," Zuckerman said from her home in Malibu. "If my dad hadn't done it, within six months, someone else would have, because it was such an interestingly unique subculture. But I don't think anybody could've anticipated what happened after that."

This Saturday, Zuckerman -- recently named by Surfer magazine as one of the 25 most influential surfers of all time, even though she never formally competed -- will visit Ron Jon Surf Shop in Cocoa Beach. From 1 to 2:30 p.m., the inspiration for all those "Gidget" movies and TV spinoffs in the 1960s will sign copies of her dad's book, which was out of print for decades until its reissue in 2001.

Now 63 and a grandmother, Zuckerman recently has emerged from the anonymity she crafted for herself after leaving the Pacific swells for college, the Peace Corps, marriage and family life.

This Saturday, Kathy Kohner Zuckerman -- recently named by Surfer magazine as one of the 25 most influential surfers of all time, even though she never formally competed -- will visit Ron Jon Surf Shop in Cocoa Beach. Image © 2004, for FLORIDA TODAY

She said it wasn't until a resurgence of interest in surfing's roots -- namely, from author Deanne Stillman, who nudged her into an interview for "Surf Culture: The Art History of Surfing" -- that she began to re-evaluate her incipient role in a lifestyle that eventually touched everything from music to language.

"The older I get, the more I'm able to appreciate what a special time and place Malibu really was back then," says Zuckerman, who works as a hostess at Duke's surf-themed restaurant there. "Today, I really enjoy talking about it."

Gidget's story began in Europe, when her dad -- a German-speaking Jew from Czechoslovakia -- attended a 1933 film premiere in Berlin, only to discover all Jewish credits had been erased.

Frederick Kohner emigrated to Los Angeles, where he became a B-movie screenwriter at Columbia Pictures. He and his wife, Franzie, raised two daughters, whom they took on frequent trips to the beach.

It was at Malibu where a teenage Zuckerman discovered the longboard, as well as a cast of characters -- mostly male -- with nicknames like Moondoggie and Kahuna.

There were always girls trying to catch the waves ("Not many," she says, "maybe two or three"), but Zuckerman describes herself as a curious pest intent on learning to hang 10. Her tenacity was rewarded with pranks (they buried her surfboard, disconnected her distributor caps), as well as an official nickname, Gidget, for girl midget.

"I wanted so badly to belong, but it wasn't a gender thing, I don't think," Zuckerman recalls. "It wasn't like, 'I'm going to prove to them that a girl can surf.' I wanted to be accepted as a surfer, that's all."

Zuckerman kept a diary of her adventures, from surfing techniques to her first romantic crush, and she told her dad she'd like to write a book about it. When she clued him in ("We used jargon nobody had ever heard of before -- we were all jazzed, and we were stoked all the time, and everything was bitchin' "), her dad immediately recognized thecommercial potential.

He decided to write it himself, from the perspective of a mildly fictitious 15-year-old girl.

"I remember this agent from the William Morris Agency, who said to my dad, 'This is an incredible story. There's going to be a book! A movie! A TV show! Comics! A play! This is big!' "

None of them, says Zuckerman, bore a remote resemblance to the truth, because she quit surfing in 1960 and didn't pick up a board again until several years ago.

After the book, after the movies, and after the music began feeding the scene (Dick Dale, The Beach Boys, The Ventures, etc.), Malibu got too crowded for her enjoyment.

"What I will say is that the surfing lifestyle, as I knew it, was all about clean living," Zuckerman said. "Gidget was portrayed as sort of a wholesome young lady, and that's how I was. It's a life I'd recommend to young women today. It's a great way to stay in shape, and it sure beats sitting around in a bar or in front of the TV set or Starbucks all day."

This story has been posted in the following forums: : Headlines; Sports; Surfing; Humor