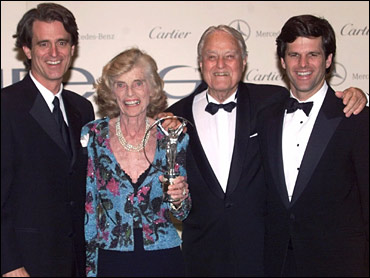 (CBS) For years, the sons of Eunice Kennedy and Sargent Shriver have been driven to change the world through public service -- while loving every minute of it.

“You believed that they wanted two things, and I can relate to this,” says rock superstar Bono. “You believe the Kennedys wanted to have fun, and change the world.”

It was the family business.

Maria Shriver sat down with anchor Lesley Stahl to discuss a subject she cares about deeply – her family.


Bobby Shriver, 49, is the oldest of the five Shriver kids. He says, with a slight edge, that Jack and Robert weren’t the only Kennedys to make history.

“In our family, the Shrivers, my mom never ran for office and she changed the world. Period. End of story,” says Bobby about his mother, Eunice, JFK’s younger sister and founder of the Special Olympics. “My mother's a very, very, very hard worker.”

Eunice’s husband, Sargent Shriver, ran for vice president in 1972, and for president in 1976. “He did the Peace Corps, the Job Corps, Head Start, legal services for the poor, foster grandparents, neighborhood health services. He started all of those,” says Maria.

“I'm so hopeful that people will understand the Shriver legacy, not as much as the Kennedy legacy, because it doesn't have the same sex appeal. But it's a solid legacy.”


Sargent was also a strong father, and author Laurence Leamer says that’s why the Shriver house in Virginia was by far the most stable home in the Kennedy family.

“Having a father, having that caring family. That's the difference,” says Leamer. 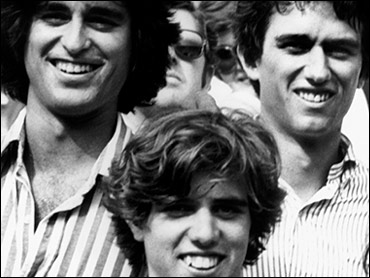 Caption: Bobby Shriver and Bobby Kennedy, with Michael Kennedy (below), were the young champions of their respective clans. (Photo: Teti/Miller)

Bobby Shriver and his cousin Bobby Kennedy were the young champions of their respective clans. They have been close but competitive since their childhood summers when all the Kennedy cousins congregated at their compound in Hyannis Port.

“It made no difference whether you played varsity football for Yale. It only mattered when you beat the Kennedys at touch football. That counted,” says Bobby Shriver, laughing.

Leamer says their paths diverged in 1970, when at age 16, they were caught with marijuana. Bobby Kennedy’s dad was already gone, but Bobby Shriver’s father was there to help.

“Bobby Shriver's father says he understands the problem here,” says Leamer. “He gets his son out of that.”

“Bobby Shriver goes on to have a very different kind of life than Bobby Kennedy,” says Leamer, whose book, “Sons of Camelot,” describes how Bobby Shriver and his brothers tried to carve out their own spaces in the family's legacy.

“I think you're always struggling in a family like ours, to find yourself, to find your own road,” adds Maria. “What can you do that they haven't done?”


Bobby says he found his interest in a field completely foreign to the Kennedy clan: producing records.

"He was pursuing me, you know," says rock star Jon Bon Jovi. "Madonna, U2, Springsteen, no one could say no."

Bobby persuaded Bon Jovi and some of the biggest names in music to be on a first Very Special Christmas album -- with the proceeds going to his mother's organization, the Special Olympics.

“We recorded a record, a Christmas rap record, with Run DMC. And that's how we became friends,” says hip-hop entrepreneur Russell Simmons. “He's very animated. He's over the top. He's got this edge and energy that you see. But his heart is peaceful. His thoughts are peaceful.”

Bobby found that peace through yoga. Now living in Los Angeles, he's practiced daily for the past 10 years. Today, he’s finally calm enough to get married for the first time.

He's also devoting himself to other projects, and teaming up with rock superstar Bono to raise billions of dollars for third-world debt relief and the AIDS crisis in Africa.

“We see our work, Bobby and I, as just an evolution. It's the same journey that Jack and Teddy and Bobby and Eunice took in the '60s," says Bono. "I would not say Bobby sees the Kennedy thing as any kind of burden. Baggage, yes. Something you carry around and you need to be conscious that it comes with you wherever you go. But he wants to see what he can do with it.” B


Bobby's younger brother, Tim, 44, may quite possibly be the son of Camelot most eager to free himself from the bondage of great expectations.

After graduating from Yale in 1978, Tim moved to another world -- less than two miles away from campus. He says he spent the happiest days of his life helping school kids in inner city New Haven who hadn’t had any of his advantages.

“To this day, I don’t think most of the people I worked with knew [that I was a Kennedy.] It just wasn’t relevant,” says Tim. "...Who the heck cares what your last name is? I mean, get off your white horse, roll up your sleeves and stop the pipes from leaking if you want to make a difference. That's what's going on. That's what I liked."

After 15 years in New Haven, Tim moved with his family to Washington, where he now runs the Special Olympics.

“It was a tough decision for me, in some respects,” he says about working for his mother’s business. But he has given the organization a truly international presence.

"He has done an extraordinary job with Special Olympics," says Maria. "He has taken it to new heights."

This month, Tim and his mother were in Japan, planning the first Asian games. “I have the best job in the world,” says Tim. “It's the only job I can imagine where almost every day, someone tells you you helped change their life. Pretty good.”


In Miami, Tim’s youngest brother, Anthony, is hard at work and play.

During the weekends, it’s common to see Anthony, 38, on the water with his wife and four children, and a special friend named George.

George and Anthony are “Best Buddies” – that’s the name of the mentoring program Anthony started 15 years ago. He says he was inspired by his aunt, Rosemary, JFK's severely disabled sister: "What she did for me is develop that sense that every person has a gift. And that every person can contribute."

In order to expand Best Buddies, Anthony has been less hesitant than some of his brothers to throw his name around.


Could there be a run for office in the future?

But ironically, the most successful politician of this Kennedy generation isn’t really a Kennedy at all. It’s Maria Shriver’s husband, California’s new Republican Gov. Arnold Schwarzenegger.

“He certainly is the one running and, God love him, being elected to elective office," says Bobby. "You know, we'll see whether he can run the programs."

“He’s not, you know, Arnold Shriver or Arnold Kennedy. I mean, he grew up with different values than we did, and he's not one of us," adds Anthony, who joined Schwarzenegger on the podium during election night to celebrate his victory.

It's that loyalty, ultimately, that has sustained the Kennedy legacy through its hardship.

"All the tragedies in my family have left me with a sense that you can carry on," says Tim. "At the end of the day, we are a family."

These Kennedy sons, whether or not there's a future president among them, say they're trying to stay true to the words of those who went before them.

"My grandfather used to say this. Fight as hard as you can for what's right, and the you let God take care of the results," says Bobby Kennedy. "I have to make it to the end of my life without stopping fighting, you know? I have to die with my boots on. And I know I'm gonna do that."