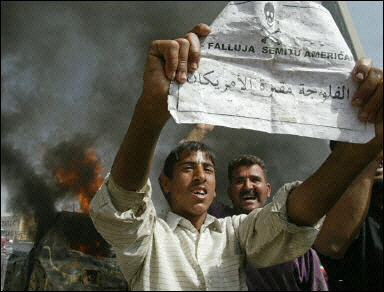 Caption: An Iraqi boy holds a leaflet saying 'Fallujah, the cemetery of the Americans,' near a burning car. A previously unknown group claimed the gruesome killing of four US contractors in Fallujah, western Iraq in revenge for Israel's assassination of Hamas leader Sheikh Ahmed Yassin.(AFP/File/Karim Sahib)


In March 2002, Bangladesh/Iran RPCV James Fox wrote an op-ed for PCOL called "Using Peace Corps to Reach Out to the Islamic World" in which he predicted that the MidEast would become a quagmire, that we had no idea what we were getting into, and that we would have no plans for getting out.

Now read his new op-ed for PCOL in which he looks at the situation as it has developed in Iraq and how we can reach out, re-joining the rest of the world to help reduce the human problems that waste and destroy so much and that it can be done; it must be done, but it won't be easy. Read the op-ed and leave your comments at:

It's a terrible mess we've allowed ourselves into. I haven't seen the pictures of mutilated soldiers; I probably don't need to. War is Hell, they say; I would presume so.

That's what so annoys me about the first presentation of these new "wars" -- the precision bombing, Shock and Awe displays, routing the "army" -- that wasn't a war; that was a charade, made for television.

Remote control missiles and dumping tons of bombs from high above, in airspace essentially controlled for a decade; that's not war. Neither are thousands of tons of tanks, rolling over entrenched rag-tag remnants of an army vanquished a decade before. Thousands of civilian victims injured and killed, of no importance, their numbers unknown and unreported. And thousands of our own injured and killed, returned home in secret - "it's not really a war, not like the good old days, when soldiers hacked each other with swords."

Well now, we begin to learn once again what ugly war is really about. The rules of civil engagement don't apply when the chips are down. It doesn't take much; just use what you can. And, the rebels know.

While arrogant chicken-hawks strut and posture, confident that their "machine" -- ten times more expensive than any other, or all the rest combined, is without any doubt, invincible. Armed with tons and tons of high-tech sensors, systems and munitions, backed up with enough nuclear power to incinerate the planet, they stand self-assured that they are immune and in total control. But, the rebels know.

The US has become over-weight, spoiled and lazy. Reality is provided through hundreds of pre-packaged channels, via cable onto our flat-screen, surround-sound TV's. It's instant gratification, with a two-week attention span at most. There's no staying power, programs and projects must be quick and show early payback, or we're really not interested.

Years ago, we claimed rights to the abandoned old colonial empires. We tried to claim Indo-china, after the French left. We've now re-ignited the never forgotten memories of the European Crusades. Wars of conquest fought centuries before our founding, measured not in days and months, but decades and centuries. Repeating the same pattern, we embarked on an invasion of economic conquest, with religious overtones. So what else is new?

We've allowed ourselves into a terrible mess. And the Rebels know. Drag a few bodies through the streets, and the Americans will turn tail and run, withdrawing their troops, leaving tons and tons and tons of their marvelous military toys behind. The folks back home have no stomach for real conquest and domination. Especially, when they were lied to, mislead, and barely saw the need. They're over-weight, spoiled and lazy. What's in it for them? They can't admit that without others oil, their lights go out.

We've allowed ourselves into a terrible mess. And we begin to know it. Our self-serving Leaders, to their own gain have lied, exploited and misused our precious resources: our name, our wealth, our economic might, our respect, our honor, our empathy and even our fears. They have encouraged, exploited and enflamed, hostile righteous indignation to our arrogant meddling around the world. 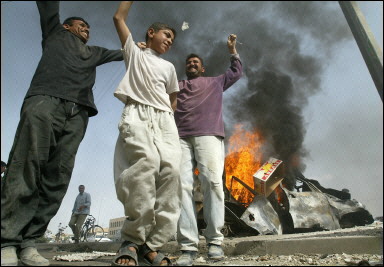 Extremist fundamentalists on all sides of the spectrum feed and support each other in a spiraling dance of atrocities and death. Each side growing stronger, as the other reacts worse. And the bills are sent home for us to pay. We've allowed ourselves into a terrible mess.

We're in too deep; we can't easily get out. There's no simple way to cut our losses, declare a Nixon-victory and get the hell out. It simply can't happen; we're in too deep. We're trapped in a quagmire, almost beyond us. We can not simply retreat or turn back the clock. We must move on.

I hate what the Bush Gang has done to us; how they've squandered the sacred trust. On every front, they've run wild with their self-serving extremist neo-conservative plan. They knew exactly what they were doing. Elected with the barest mandate, if any; they should have proceeded with a moderate hand. But no, they've run, totally out of control, stifling any debate, with a sweep of their commandeered theft of our patriotic flag, under God of course.

No more; the emperor is wearing no clothes.

Decades of treaties, programs, and diplomatic negotiations tossed into the trash. Social programs gutted and set aside to wither and die. Entire segments of society abandoned and hung out to dry. An economic surplus, our safety reserve, squandered while ranting about others proclivity for excess. Their friends, cohorts and supporters raiding the public coffers, via every portal, hauling truckloads of wealth to their offshore havens; "a great ROI, on their campaign contributions," they laugh, all the way to the bank. It's so transparent.

Fostering social disruption, pandering to the most bigoted, divisive social issues, they feed on our worst insecurities. First, they create economic stress and then they exploit resulting uncertainties and fears. Precious constitutional protections and rights are eroded and repealed by administrative edict. It's so transparent.

By exploiting an attack from without, these scoundrels have destroyed and pillaged our precious heritage from within. With no sense of shame or conscience, they lie to our face, struggling to find the latest spin, or plausible justification. It's so transparent.

But enough. We've allowed ourselves into a terrible mess. And, now we've got to get ourselves out.

It won't be easy; too much damage has been done. We're over extended; our economy has been ruined. Our respect and leadership in the world has been squandered. Extrication and cleanup, poses a problem we've not faced since World War Two. And no, indiscriminately dumping more Shock and Awe bombs will not make it all well.

The original world challenges were very real, and cannot be naively wished away. It was then, and now more so, still a dangerous world. The root problems remain, acerbated by exploitation and mismanagement. First, our own damage must be reined in and controlled. Terrorists must be countered and contained (not by throwing fuel on the fire). Then slowly, underlying festering problems must be addressed. Rather than Neanderthalic brute force, it will take the highest intelligent skills we can muster, and the cooperation of all. 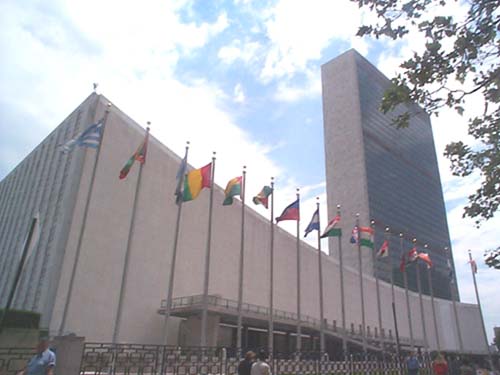 There are fundamental world problems to solve: population, health, environmental, economic and social. These challenges demand our participation, contributing the best, rather than the worst we can offer. We're not the only dogs on the block, nor do we alone have The Answer. The old ways of domination and exploitation are out of date. It is embarrassing to see our national might turned to these outdated ends. We must move on, with new solutions to the new world, as it now is.

We must first, put our own house in order. We must all work together: Liberals, Progressives and Conservatives; all segments of poly-dimensional societies. We can no longer afford to fight amongst ourselves - or let others exploit our differences to their ends. Those who profit from division must be reined in.

We need the remaining strength of the military for stability. We need the energy of a robust economy to fuel the clean up and recovery, and to pave a secure path into the future. We need the brightest and best minds from every sector of society, to develop programs that work. And we will need the consensual support of everyone to make it happen.

We must have an open free public debate, without manipulation by vested political, corporate, economic or religious self-interests. Most people on all sides are "patriotic" -- we must stop the flow of vitriol. We need to initially stabilize the disaster and tone down the arrogance, while mending our worldwide political fences.

We need, through national debate, a working definition of the real problems, quickly reaching a general consensus, and a Plan for the Future. Only then, with the support of many good folks in this country, can we reach out, re-joining the rest of this small world, helping to reduce the human problems that waste and destroy so much. It can be done; it must be done, but it won't be easy.

We've allowed ourselves into a terrible mess. And now, we've got to get ourselves out.

James Fox served as a Peace Corps Volunteer in East Pakistan (Bangladesh) from 1964-65 and was evacuated during the war and transferred for Iran where he worked in Village Development from 1965 to 66. He served on Peace Corps Staff in Iran from 1966 to 68 and in 1969 traveled through Afghanistan, Pakistan, and India, and worked in Nepal. In 1995 he returned for a 1-month visit to India, Bangladesh, and Nepal. For the past 30 years he has been a Professional Civil Engineer and is now retired. He is the author of a previous op-ed for "Peace Corps Online," "Using Peace Corps to Reach Out to the Islamic World".

This story has been posted in the following forums: : Headlines; Iraq; COS - Bangladesh; COS - Iran; Speaking Out

James Fox's op-ed PCOL article is dynamic, but troubling. I believe that the Bush administration is not extremist neo-conservative. Our country is blessed to have a moral president, who honestly is trying to do his best in a terrible situation. We cannot continue to point fingers of blame. I do believe, as Fox says, that we need to put our "house in order" and work together to make this a better world. As a RPCV in The Gambia, West Africa, I see what sharing and caring can do for the betterment of all of us. I've learned so much from this experience. Let's open our hands, not clinch our fists.

I agree with most points about James Foxs' article.

I was talking with a fellow from Iran recently and his message was that Saddam would eventually have grown old, died and then there would have been an internal revolution.

Instead, the US has gone into Iraq at great expense monetarily, innocent civilians lives that have been lost and young US soldiers who are fighting for our "freedom".

It is great that the world has gotten rid of Saddam sooner than later but is the price too high? Also, what is the "freedom" that we might well enjoy from this conflict? Is it the freedom to drive SUVs instead of more economical vehicles?