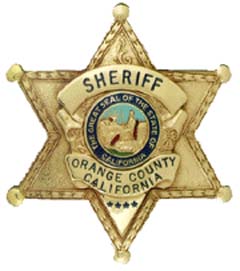 Read and comment on this story from the Orange County Register on the recent scandal in the Orange County Sheriff's office that may provide an opening for Gaddi Vasquez to re-enter California politics. The local newspaper says that should the present Sheriff Mike Corona vacate his current post, a face-off between State Assemblyman Ken Maddox and Peace Corps Director Gaddi Vasquez would make a good contest. The Orange County Sheriff's Office is a $500 million-per-year agency - 50% larger than the Peace Corps and the Director has experience in law enforcement as a former police officer. The Director has been in California the last few days speaking at the Escondido Rotary Club, the Nixon Library and at the Yorba Linda Friends Church. Read the story at:

Some not surprised by Jaramillo firing*


Some not surprised by Jaramillo firing

Assemblyman Ken Maddox, R-Costa Mesa, was among those not surprised to see fired Assistant Sheriff George Jaramillo entangled in allegations of influence peddling and other malfeasance.

"I think a large portion of Orange County's law-enforcement community expected something like this to happen," said Maddox, a former Tustin cop and current Tustin reservist who was on the Garden Grove City Council when it settled a discrimination lawsuit Jaramillo filed against the city. "We're very supportive of Sheriff (Mike) Carona and are pleased he's cut Jaramillo loose."

Should Carona emerge from the current brouhaha politically unharmed and run for lieutenant governor in 2006 ľ or otherwise vacate his current post ľ The Buzz would enjoy a competitive race to replace him.

For instance, although neither has announced his interest, a face-off between Ken Maddox and Gaddi Vasquez would make a good contest. 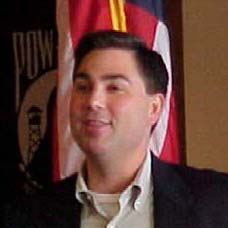 Maddox is termed out at the end of this year and lost his primary bid for state Senate to Assemblyman John Campbell, R-Irvine, so he'll be looking for work. 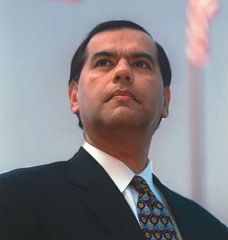 Vasquez is a former Orange cop and ex-county supervisor who's now Peace Corps director. He announced his resignation as director last year and ľ before mysteriously saying he wasn't quitting after all ľ cited his desire to be back in California near his family. 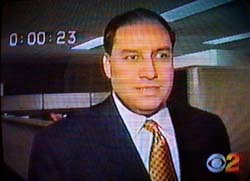 Less than two weeks after OC Weekly revealed Assistant Sheriff George Jaramilloĺs role in a possible kickback scheme, he was fired from his $135,000-per-year post and the FBI raided his office.

It was an ugly fall for the cocky 43-year-old whoĺd risen from an undistinguished career in the Garden Grove Police Department and parlayed a friendship with then-newly elected Sheriff Mike Carona into a plum political appointment: second in command at the $500 million-per-year agency.

A high-level Sheriffĺs Department source said Jaramillo was so shocked by his March 17 dismissal that he refuses to turn in his badge.

Investigators are trying to determine if the former assistant sheriff participated in a bail bonds kickback scheme inside the county jail. They say powerful inmates called "tank workers" were paid several hundred dollars each time they forced a newly incarcerated inmate to hire a certain lawyer or bail bonds agency.

No one has been charged with any crime, but the probe is focusing on the relationship between Jaramillo, Creative Bail Bonds Inc. and local defense attorney Joseph G. Cavallo. A longtime friend of Jaramilloĺs, Cavallo is a business partner of Assistant Sheriff Don Haidl, who has made a fortune selling used government vehicles. Cavallo also represents Haidlĺs 18-year-old son, Gregory Scott Haidl, in an ongoing gang rape case.

"This whole county is going to be turned upside-down when the truth comes out," said Glenda Stroobant, who says her bail bonds agency has lost 60 percent of its business because of "racketeering." Stroobant says she has formally complained about jailhouse bail bonds corruption for six years. "I think the FBI investigation is wonderful. Enough is enough."

Detectives are also looking at Jaramilloĺs ties to CHG Safety Technologies, a Newport Beach corporation seeking hundreds of millions of dollars in government contracts for a laser device created to aid police attempts to end vehicle pursuits. Law-enforcement sources tell the Weekly that the former assistant sheriffŚwho has admitted accepting up to $10,000 from CHGŚworked for the company while wearing his sheriffĺs uniform and on county time. The investigation includes a review of out-of-state banking transactions.

State laws and county ethics regulations prohibit public employees from using their offices for personal financial gain. But in media interviews, Jaramillo has insisted he broke no law, is the victim of a "witch-hunt" and will be exonerated at the end of the investigations.

Although he was an "at will" political staffer for Carona, the former assistant sheriff has threatened to file a lawsuit over the firing and, to the amusement of numerous law-enforcement officials, claims he is contemplating a future campaign for sheriff. Last week, he hired Cavallo law partner Peter Scalisi, who is also representing Gregory Haidl in the rape case. Neither Jaramillo nor Scalisi could be reached for comment.

Only eight months ago, Jaramillo basked in the national spotlight. He testified in Washington, D.C., about anti-terrorism efforts before Representative Christopher Coxĺs U.S. House Select Committee on Homeland Security. CNNĺs Connie Chung interviewed him about the investigation into the rape and murder of Stantonĺs five-year-old Samantha Runnion. Southern California newspapers as well as radio and television stations portrayed him as an aggressive crime fighter.

But last summer, fellow cops began to complain privately about Jaramillo. Newport Beach Police accused him of interfering on behalf of Gregory Haidl in their probe of an alleged 2002 gang rape in Assistant Sheriff Haidlĺs Corona del Mar home. The Orange County Register reported that he used a $720-per-hour Sheriffĺs Department helicopter for personal convenience. In October, a department telephone recorded Jaramillo and another deputy plotting to hide from the public a San Clemente drug bust involving Gregory Haidl. (Out of jail on bail at the time, Haidl was not cited even though officers found marijuana next to his wallet and keys.)

The first public glimpse of Jaramilloĺs mounting trouble was in late October, when KCBS/KCAL reporter Dave Lopez caught him emerging from the grand jury room where heĺd taken the Fifth Amendment and refused to answer questions.

During the early days of the turmoil, Jaramillo remained unfazed. He joked happily about his invincibility and even taunted Lopez. He told people he had a "brotherly" bond with Carona. In a December interview with the Weekly, he left no doubt that he saw a conspiracy forming against him, but he believed that his fate was tied so closely to the generally popular sheriff that it wouldnĺt succeed. He took a vacation in Hawaii and spent hours upon hours trying to identify his enemies in law enforcement. He openly wondered if District Attorney Tony Rackauckas was carrying out an unspecified personal vendetta against him.

To the end, the assistant sheriff seemed unable to see that the man who wanted him out most was his boss: Sheriff Carona.

When Jaramillo arrived at the sheriffĺs Santa Ana offices on March 17, he was clueless that a four-and-a-half-month behind-the-scenes process was about to explode in his face. Carona had been dissatisfied with Jaramilloĺs role in the department since November; for legal reasons, he waited to make his move until after heĺd received permission from officials in the countyĺs human-resources department, high-level sources say.

That approval came on the morning of Wednesday, March 17. County firings customarily occur on Fridays, but Carona didnĺt delay. He knew news of the FBI probe was imminent, and sources say he didnĺt want the public to believe he had reacted only to federal pressure. Within minutes of the decision from human resources, he ordered staff to change the lock on Jaramilloĺs office.

The assistant sheriff entered the building at about noon and found members of the dignitary-protection unit waiting to usher him into a brief, curt meeting with Carona. He was fired on the spot. Jaramillo asked if he had any options and was told he could only concur or not with his dismissal. After collecting Jaramilloĺs Sheriffĺs Department-issued gun, cell phone and car keysŚeverything but the badgeŚthe dignitary-protection unit drove an "incensed" Jaramillo to his Rancho Santa Margarita home. There, he reportedly told deputies that Carona would have to personally take his badge.

On Saturday, March 20, Jaramillo returned to the Sheriffĺs Department at about 11 a.m. to collect his belongings. FBI agents holding a search warrant had been there just three hours before. They confiscated the former assistant sheriffĺs files and computer. When Jaramillo walked in, there remained on the wall framed photographs of scenes such as Newport Harbor. He began to pack the pictures, but in a final indignity, a deputy told him to put them back. The pictures belong to the Sheriffĺs Department.

This story has been posted in the following forums: : Headlines; Peace Corps Directors - Vasquez; Politics

I believe Gaddi Vasquez would make a better sheriff than Director of the Peace Corps. You go Gaddi.

Gaddi Vasquez is a political hack who began as a cop and then worked his way up the local GOP ranks to become one of the 5 members of the county's Board of Supervisors in the mid 1990's. Like the other 4, Vasquez disgraced himself by allowing the county treasurer to gamble with billions of dollars of public funds on derivatives and other highly speculative investment vehicles. The result was Orange County going bankrupt -- the largest Chapter 9 filing in US history. I can't remember if Vasquez was unceremoniously booted out in the next election or if he had the sense not to run for re-election, but I know that when the dust settled, he was gone.

While a Supervisor, Vasquez developed no reputation because he never really said anything or did anything. Mostly he voted with the Board's conservative GOP consensus. If Vasquez were a US Supreme Court Justice, he'd be Clarence Thomas.

I understand and believe that his appointment as Peace Corps Director was a direct function of a 6-figure contribution to Bush's 2000 election
campaign. Previously, Vasquez had no experience known to me in any aspect of foreign aid or development management. What he had was a track record of failing to manage large public entity budgets that any randomly-selected person from any American telephone book could have bettered.

Nevertheless, if Vasquez wants to leave the Peace Corps to run for Sheriff, let him. Vasquez is known around here as an amiable dummy, but not a crook. These days in these parts, that puts him somewhat above average. On balance, he'll probably do less harm in the Sheriff's office than as head of a massive foreign aid agency.

Who is this lobbyist Robert Levy, who was the lobbyist for CHG, Tech., and the Orange County Sheriff Department. Levy is also involved in scandal in Sacramento. See Sacramento Bee, Metro section May 9, 2004.

If you're needing Orange County Bail Bonds, please feel free to find out more about it by doing some searches on Google.