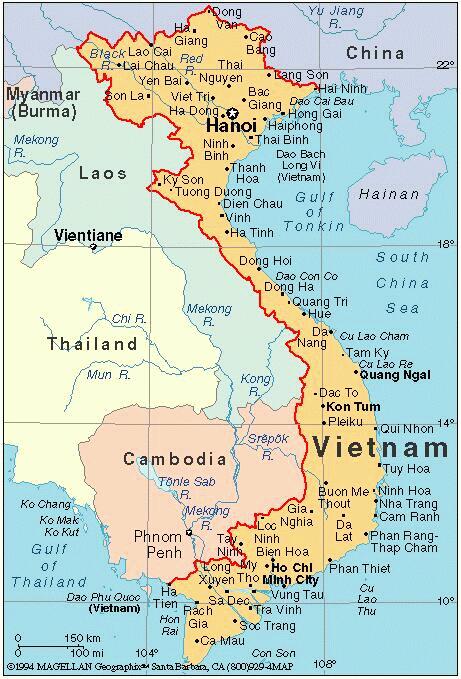 HANOI - The diminutive soldier in a brown Vietnamese army uniform bounded past a U.S. honor guard and up the Pentagon's red-carpeted steps. At the landing, the door opened and a smiling Defense Secretary Donald Rumsfeld appeared with an outstretched hand. Pham Van Tra clasped it warmly.

Tra, a veteran of wars against France and the United States and now his country's defense minister, is one of Vietnam's four or five most powerful figures.

His visit to Washington in November signaled a policy change that would have been unimaginable a decade ago: The United States and Vietnam are forging, albeit cautiously, a military relationship based on some mutually shared worldviews.

With the legacy of Vietnam seemingly ready to play itself out again in a U.S. presidential race, the timing of the exploratory steps taken by both countries is ironic.

Although many allies have distanced themselves from the United States because of its war in Iraq, a former mortal enemy is seeking a closer relationship.

Since the United States lifted its trade embargo against Vietnam in 1994 and diplomatic relations were established in 1995, ties between the two countries have been driven by economic and political issues.

Military cooperation has been limited to Hanoi's help in locating the remains of more than 700 missing U.S. servicemen killed during what the Vietnamese call the American War.

But today, Washington sees a terrorist-free Vietnam as a stabilizing regional force, and Hanoi considers its relationship with the United States a counterweight to neighboring China.

With diplomatic and economic ties on solid footing after five years of negotiations produced a Bilateral Trade Agreement in 2000, both sides appear intent on pushing into the uncharted waters of military cooperation, Western and Asian diplomats said.

Part of the reason, they said, is that Vietnam -- whose 600,000-strong military is saddled with outdated armaments -- represents an attractive market for U.S. arms manufacturers.

Vietnam wants the option of weighing bids from American arms sellers against those of other countries to bargain for lower costs, as it did when it purchased four Boeing 777 commercial jetliners for a rock-bottom price.

Tra, the highest-ranking Vietnamese to visit the United States since the war's end in 1975, received VIP treatment from the Bush administration, which quickly granted his one request -- to visit ground zero in New York City.

If symbolism of the emerging relationship were needed, it was provided by Secretary of Veterans Affairs Anthony J. Principi, who attended a reception honoring Tra at the Vietnamese Embassy, even though it was Veterans Day in the United States.

Less than three weeks after Tra's visit, the missile frigate Vandergrift made its way up the Saigon River to Ho Chi Minh City, formerly Saigon -- the first U.S. Navy vessel to make a port call in Vietnam since 1973.

In February, Adm. Thomas Fargo, head of the U.S. Pacific Command, became one of the few Westerners to tour Vietnam's naval base in Da Nang.

To senior communist commanders suspicious of U.S. intentions, Tra said, in effect, "This is a new relationship; get used to it," according to Western military sources.

Tra's U.S. visit was in reciprocation for one made to Hanoi in 2000 by then-Defense Secretary William Cohen.

The military exchanges, which both sides described as confidence-building steps, come as Vietnam and the United States have moved ahead on a wide range of nonmilitary issues: The Peace Corps has been invited to discuss sending volunteers to Vietnam. A narcotics pact has led to cooperation in combating the global drug trade.

As a result of an aviation agreement, American Airlines has opened an office in Hanoi, and U.S. carriers are expected to resume scheduled service to Vietnam this year for the first time since a Pan Am jetliner took off from Saigon in late April 1975.

Western diplomats said the progress reflected Vietnam's intention, articulated at a Communist Party congress last summer, to invigorate its ties to the United States and the global community as a whole.

A minority of ex-servicemen and congressional representatives and a larger proportion of Vietnamese-Americans have opposed all moves toward reconciliation in the last decade with Vietnam's Communist government and would probably object to steps toward military cooperation.

Recently, they have shifted the focus of their objections from Americans unaccounted for in the war to Vietnam's treatment of its minority population in the central highlands.

Clouds over U.S.-Vietnamese relations remain, including differences over human rights and religious freedom, U.S. accusations that Vietnam is "dumping" -- or selling at below cost -- tons of catfish and shrimp in the United States, and Vietnamese calls for the United States to be accountable for toxic chemicals such as Agent Orange that American forces used during the war.

But both countries seem more interested in pointing to the success of their trade pact than to unresolved issues.

This story has been posted in the following forums: : Headlines; Vietnam; Expansion