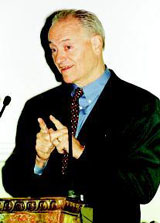 Even as Colorado’s higher-education system has suffered from several budgetary and public-relations blows, the fortunes of Colorado College seem to be on the rise, said college President Richard Celeste.

Celeste, a former governor of Ohio, was in Grand Junction on Wednesday to talk with graduates and talk about the college with high-school guidance counselors. He also wanted to spread the good news about a modern liberal education and the need for higher education in the American economy.

Applications are up 19 percent to 4,162 for the private, liberal-arts college in Colorado Springs, he said. Applications came from 35 states, but 22 percent of the 1,950-member student body is from Colorado.

The real role of education, he said, reaches beyond the idea that a higher education makes for a more marketable student. It should inspire students to look beyond the traditional limitations of disciplines and other barriers.

Students who can synthesize their learning by including, say, social sciences and humanities, into a curriculum of academic disciplines will be better prepared to understand issues that go beyond their traditional boundaries, he said.

For instance, an accountant with a background in international political economy will be a better accountant, he said.

The college, he said, tries to “teach young people to look beyond old definition or disciplines” to “better prepare themselves to deal with the world and the future.”

With 40 percent of its students enrolled in the natural sciences, compared to the national average of 13 percent, Colorado College has earned a reputation as an elite national institution, he said.

Fifteen students from Grand Junction and the surrounding area now attend the college.

Gary Harmon can be reached via e-mail at gharmon@gjds.com.

This story has been posted in the following forums: : Headlines; University Administration; Peace Corps Director - Celeste