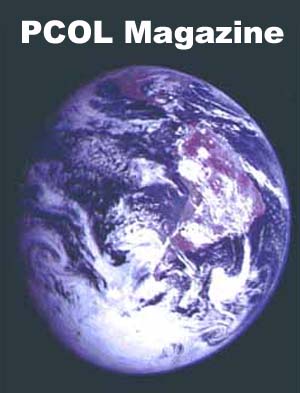 Easing up on the Earth

He and his wife, Mary, are doing their best to make that happen.

Every day, Terry, 56, rides his recumbent bike from the couple's home near the University of Kansas Hospital to his workplace in Overland Park — about 15 miles each way.

Only three pieces of furniture, including the couple's mattress and their brown leather living-room sofa, are new. Everything else is a gift from a relative, from a garage sale or salvaged from a curb or somewhere else.

Much of the work they've done to their midtown home incorporates recycled materials. The claw-foot bathtub, for example, was in the back yard full of dirt when the Rouses bought the now-100-year-old house 12 years ago. Now the tub is fresh and clean and connected to plumbing in the downstairs bathroom; Mary regularly bathes in it.

The two have dramatically cut their home energy consumption and greatly increased their comfort by insulating the roof and walls and by installing highly efficient windows throughout their two-story shirtwaist house. Their refrigerator is a two-compressor European model that eats much less energy than the average American model.

In a typical week they put out one small bag of trash. Nearly all of their waste goes into a recycling bin or the compost pile in their back yard.

Susan Kysela, a friend and neighbor of the Rouses, said the two “don't do anything without considering the environmental consequences. If there's an environmental way to do it, they'll go out of their way to do it that way.”

Terry's green streak is focused on bicycles as transportation. His bikes — he has had quite a collection over the years — have gotten him to the office for 15 years or more.

“I can't even remember when I've driven to work,” he said.

He has cycled to work from their house to Overland Park, downtown and even to Olathe — on the far side of the Great Mall of the Great Plains. Now that was a stretch.

“It seems 20 miles each way is my limit for riding both ways,” he said.

A mechanical engineer, Terry has a computer-aided design program at home, and he's toying with features that would make a bike more suitable for commuting in all types of weather. He has ridden in temperatures as low as 8 degrees, although he didn't necessarily enjoy it. In Europe, he said, some bicycles have fully enclosed passenger compartments.

One of Terry's goals is “to extend the usefulness of a bike.”

His recumbent bike, with its seat close to ground and pedals out front, is easier on the back, Terry said. In slick or wet weather, he rides his three-wheeled recumbent bike. Its two front wheels enhance its stability, which is helpful when going around corners, he said.

Every May, a team from the school participates in a solar bike competition in Topeka. You've heard of the gasoline-electric hybrid car. Terry calls these bikes a “human-solar hybrid.” They max out at around 45 miles per hour on level ground, “depending on how sunny it is.”

The Rouses both keep car travel to a minimum, getting along with one vehicle much of the time. (It's a 1991 Honda Accord at the moment.) Mary thinks their next purchase should be a gasoline-electric hybrid car, or maybe an electric scooter.

Since 1995, when Mary left her job at the Environmental Protection Agency in Kansas City, Kan., she has chosen jobs close to home. Last August, in a storefront a short walk away at 4504 Bell St., she opened Urban Mining Homewares.

Mary calls herself “a natural hunter-gatherer.” She traces the tendency to being the oldest of five children and growing up without much money. A neighbor sewed dance costumes for fleets of little dancers, Mary said, and had a trash can stuffed with great finds.

Mary started hunting and gathering early, then discovered garage sales when she was a college student and thrift stores a few years later.

With a taste for the old, and talents in sewing, painting and carpentry, she has furnished her house with rescued and resurrected objects and now stocks her store with them. She buys partly used cans of “perfectly fine” acrylic and latex paint and uses them almost exclusively in her business.

“I, to a fault, find potential in things that have been abandoned,” she said, and pointed to a nice stuffed chair in her living room. She'd dragged it home from the curb across the street, and had it reupholstered with fabric she bought for $7.

“I'm horrified at how entrenched the throw-away culture is,” Mary said. “Our view of resources is so immature. The ‘new is better than old' thinking I totally disagree with.”

As they refurbished their house, she and Terry incorporated lots of used materials in their overhaul. Bathroom wainscoting came from a barn, as did the floor on their front porch and their attic. Their kitchen cabinets were salvaged from a house that burned, and the floor of their deck came from a deck at Terry's parents' house.

Their home-improvement projects have included blowing insulation into the exterior walls, installing a high-efficiency furnace and replacing almost every window with double-paned, argon-filled, low-E windows. He estimates that their wintertime gas consumption has tumbled by 30 percent or 40 percent as a result.

They have a high-efficiency clothes washer and don't bother with a dryer. Mary likes hanging up clothes outside when the weather's suitable, in the basement when it's not.

And their refrigerator is a European model with lots of insulation and two compressors, making it more efficient than most models sold in the United States. One compressor runs the freezer, the other the refrigerator compartment.

The two haven't focused as much of their ecological energy on their garden and landscaping, but they do compost their organic waste, and they grow some of their own food. Early on they planted a few fruit trees, blueberries and strawberries and grapes. But they don't always work fast enough to beat the birds to the harvest.

They usually plant tomatoes and a few spring vegetables. Mary transplanted some mint into the parkway strip between the sidewalk and the house. In typical fashion, the mint has asserted itself.

Whenever their attention and energies turn to the outside, the Rouses plan to add native trees and flowers to the grounds. Terry likes the idea of buffalo grass, a drought- and heat-tolerant native grass.

Whether it's about their home's interior or its exterior, or how to move around the city, or the definition of “trash,” the Rouses have found countless ways to reduce their impact on the Earth. And the importance of that travels far, as Terry discovered when he was in the Peace Corps decades ago.

“The thing that stuck with me was how much of a role model this country is for the rest of the world,” he said. Whatever people are embracing in the United States, other people say, ‘Oh, we should do the same thing.' ”

This story has been posted in the following forums: : Headlines; Environment