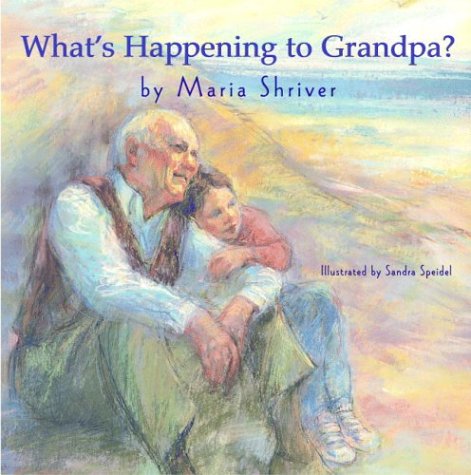 By JANET PARMER
FOR THE PRESS DEMOCRAT

Speidel and Shriver recently completed a book for children about the disease, "What's Happening to Grandpa?"

"When I heard the title, I knew what it would be about. It's so close to my heart," said Speidel, who worked with Shriver on two other books.

Like Shriver's father, her father had Alzheimer's, a disease marked by dementia and progressive loss of mental capacities. His death made their latest collaboration particularly personal.

The publication date of their book was moved up from May to coincide with Shriver's appearance on the "Oprah" television show later this month.

Shriver is married to Gov. Arnold Schwarzenegger and recently resigned from NBC News. Her father, Sargent Shriver, was the founding director of the Peace Corps and was Democrat George McGovern's running mate in the 1972 presidential election.

He announced last year that he was in the early stages of Alzheimer's disease.

Speidel and her daughter, Zoe, helped care for her father, Louis, as his illness advanced.

In "What's Happening to Grandpa?" a girl named Kate is puzzled by the changes in her grandfather's behavior. Her mother gently explains that he's got Alzheimer's and tells her about its implications, that it isn't contagious and that there isn't a cure.

The girl decides to create a photo album to help keep memories alive for her grandfather and for herself.

Speidel, who has illustrated 15 other children's books, did 14 soft pastel pictures to accompany Shriver's text. She also was the artist for the cover, which shows a girl and her grandfather sitting on the beach casually leaning against one another and looking out toward the sea.

"The pictures are semirealistic and somewhat impressionistic," Speidel said. "Maria's favorite color is blue, so I use blue. She likes the books to be colorful with pinks and greens."

Speidel and Shriver's first collaboration, "What's Heaven?" was inspired by Shriver's conversations with her children about the death of her grandmother, Rose Kennedy.

When Shriver was ready to write a book about disabilities, she requested Speidel as her illustrator.

"I love her work," Shriver said in a written statement responding to queries about Speidel. "It's impressionistic, colorful and emotional. She gets what I'm trying to convey. It appeals to boys and girls and grown-ups."

As is typical in the publishing world, Speidel and Shriver interacted closely with book editor Ellen Jacobs but they haven't met, though they have traded letters.

"What's Happening to Grandpa?" was put on an unusually tight schedule, with Speidel receiving the text in September and given a January deadline for the illustrations. Typically, she would have a year to create the pictures.

"I made a commitment to give up whatever else I had to get the job done," said Speidel, who has been pursuing fine art painting in the past few years.

On collaborations with Shriver, Speidel initially sends rough black and white sketches to the publisher, who forwards them to Shriver, who decides whether she likes the look. Shriver had total control of the book from start to finish, Speidel said.

"It's completely unusual for an author to have complete veto power," she said.

Speidel believes her experience with Alzheimer's disease gave her valuable insight that guided her artwork. She used her family photo albums as inspiration for the illustrations.

"You've got to get inside the characters. Because I went through this with my father, I felt close to the grandfather character and I knew how he'd look or respond," she said.

"I felt I understood the emotion because these own characters were in my life. The upshot is all we have is love and all we have is now. When I'd think about my dad, I'd think: Is he suffering or am I suffering?" Speidel said.

She said she admires Shriver for writing books about difficult issues confronting youngsters.

"I really respect her for that. She's filling a niche where there aren't books, but you can't sell them without a name author. They're almost like comfort books for kids going through events in life they don't understand," she said.

Speidel studied art in college and began doing illustrations for books, magazines, brochures and advertising 25 years ago. She's also taught classes at the Academy of Art College in San Francisco.

About three years ago, she shifted toward fine art, and has been doing oil painting and pastels.

"My work is expressive, colorful, fairly realistic, and painterly. I'm moving towards abstract. I'm good at the 'how' of painting and now I'm exploring the "what,'" she said.

Speidel's work has been displayed in art galleries in Gualala, Tomales and as part of the Cultural Arts Council of Sonoma County's ArtTrails open studio tours.

You can reach Correspondent Janet Parmer at 782-9130 or jhparmer@comcast.net.