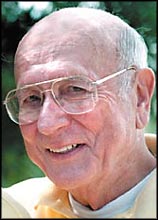 John Dellenback would be proud.

A trail at the Oregon Dunes National Recreation Area will be renamed to honor the late U.S. congressman from Medford who worked to preserve the state’s largest coastal dunes.

The "John Dellenback Dunes Trail" will be formally renamed May 8 at the same site where the 31,000-acre national recreation area was dedicated in 1972. The 11 a.m. ceremony at the trail will be open to the public.

Dellenback, who died in December 2002 at age 84, served four terms in Congress and played a key role in protecting the dunes from development. He introduced legislation to preserve the area and nursed the bill through the House of Representatives. He also met personally with people who stood to lose private property and vacation homes inside the protected area and encouraged them to join the effort to preserve the dunes for future generations.

"He cared about those people and how they felt," said his widow, Mary Jane Dellenback, who still lives in Medford.

Advertisement
"He wanted them to be happy and invested in the project," she said, "not grumpy and thinking about suing."

Dellenback went to Congress as a Republican in 1966, when moderates such as Mark Hatfield and Tom McCall led the party in Oregon. He decided to try to preserve the wild stretch of dunes near Reedsport when he realized development could destroy their unspoiled character.

"He cared about the planet," said his daughter, Barbara Dellenback of Eugene. "Saving it for conservation reasons was important to him."

The Dellenback Trail, formerly the Umpqua Dunes Trail, lies about 10 miles south of Reedsport just off Highway 101. It includes a loop through a stretch of coastal forest, a viewpoint where hikers can see a vast expanse of dunes, and a track across the sand to the ocean.

"You walk a mile or so and then you enter the dunes," his daughter said. "It’s a quick little walk to the top of a dune where you can see really a long way. It’s a really nice area."

The national recreation area is part of a vast expanse of sand that stretches almost 50 miles along the coast, from the mouth of the Siuslaw River to Coos Bay. The sand began as rock in the mountains millions of years ago. Forces of erosion gradually transformed the stone to sand, and moving water carried it down to the sea, said John Zapell, a public affairs specialist for the Siuslaw National Forest, which manages the recreation area.

Zapell said most of the original expanse of sand along the coast has been stabilized, but the dunes in the recreation area continue to move and re-form, driven by wind and rain. The dunes attract as many as 2 million visitors every year, and travelers come from all over the world to see them.

Dellenback lost his bid for re-election in 1974, but continued his work in public service. In 1975, President Gerald Ford appointed him director of the Peace Corps, a post he held for two years.

He also served on the board of World Vision International, a Christian relief and development organization.

"It’s appropriate and I’m very pleased they’re doing it," she said. "The dunes wouldn’t exist without him."

This story has been posted in the following forums: : Headlines; Peace Corps Directors - Dellenback