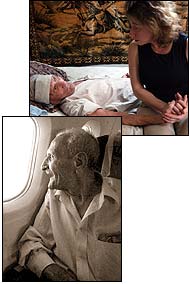 Caption: Rachel Zelon, above, comforts fever-stricken Sasson in his 12 x 12-foot room in an Iraqi shelter. Below left, a recovered, happier Sasson on the plane to Israel.
HIAS PHOTOs / JEFF LUTERBACH

With those few, simple words, New Jersey resident Rachel Zelon came almost full circle on an arduous journey that had begun over three years before.

In the sweltering June of 2003, and then again in July and November of that year, Zelon, blonde, petite and probably weighing no more than 100 pounds soaking wet, traveled to war-torn Iraq. It was a time when most humanitarian aid organizations thought it too dangerous and difficult to get there. Her mission: to rescue some of the 35 mostly elderly Iraqi Jews remaining and resettle them in Israel.

Zelon, 44, vice president of program operations for HIAS (Hebrew Immigrant Aid Society) was in Cleveland last week. She came to share her harrowing and heroic tale on behalf of the Jewish Community Federation's Campaign for Jewish Needs.

Her story really begins in December of 2000 when HIAS received an anonymous call saying an Iraqi family of six had fled their country and were hiding in Amman, Jordan, fearful that they would be discovered as Jews. Their wish was to get to London, but first they needed official recognition as refugees.

Since Zelon and her boss were going to Israel the following week, they arranged to meet first with the family in Amman. The anticipated brief visit turned into three days. While Zelon arranged for the family's departure to Vienna and (five months later) to London, she and her boss also had their first introduction to the Iraqi Jewish community. No small accomplishment since Jews there lived "as invisibly as possible."

Iraq, explains Zelon, used to be a huge, vibrant, well-to-do Jewish community with perhaps 60 synagogues. Today one synagogue is still open in Baghdad, but it hasn't had a rabbi in 16 years.

Two weeks before the Iraq war began, the Iraqi family, by then living in London (thanks to the efforts of HIAS), called the organization asking if they could also help the wife's brother, who would be arriving shortly in Amman. HIAS agreed, and when Zelon met with the man, he helped her put together a list of all the Jews remaining in Iraq, including their ages, occupations, and health status. Just as important, he drew maps of where these people lived.

At Zelon's request, the man also wrote a letter of introduction for her, which would prove critical. "Help her in any way you can," the letter said.

Meanwhile, with Saddam still in power, there was no way for Zelon to act on the information she had accumulated. But once U.S. troops had secured Baghdad, and Americans at that point were "well received," HIAS decided "this is the time to go."

Getting there, however, would be far from easy.

In May of 2003, Zelon began working on logistics. The State Dept. didn't know how to help, she says. Serendipitously, an American Jewish cameraman just returned from Iraq called HIAS on a humanitarian quest of his own. He coached Zelon on how to get to her destination. Since there were no flights into Iraq, she would have to fly to Jordan (which borders Iraq), hire a trustworthy driver, procure a large suburban car to travel in, and hook up with a convoy of other vehicles.

The cameraman also made reservations for Zelon and her cameraman, Jeff Luterbach, at the hotel in Baghdad where American media stayed.

Once all the parts and pieces fell into place, Zelon and Luterbach started out. Their hazardous 14-hour trip began at 3 a.m. (so as not to be traveling in Iraq after dark). As soon as they crossed the border into Iraq, she says, "the drivers all pulled over and topped off their tanks because it was too dangerous to stop" inside the country. Then they drove at a terrifying 95 to 100 mph until they reached Baghdad. As they passed Falluja, everyone was told to don their helmets and flak jackets.

Working from a list of three people in Baghdad whom she was told might help her meet other Jews in the community, Zelon first visited a 42-year-old Jewish dentist. Skeptical about Zelon, the dentist asked her 83-year-old mother to stop by. The two women pored over Zelon's letter of introduction and, after three hours of quizzing, Zelon reports, "I passed muster." The dentist then offered to take off from work for a week to help Zelon.

The next day, with a (critically important) trustworthy driver engaged, their first stop was the community shelter. Conditions at the shelter were "horrific," Zelon reports. "I saw elderly, disabled, mentally unbalanced people living in filthy, poverty-stricken conditions. No medical care was available and it was 115 degrees." Zelon was formerly a Peace Corps volunteer and lived in the jungle, but never saw conditions like these, she says. Two Jews were among those living in that shelter.

Also on that first trip, she met a diabetic Jewish man in his 80s who hadn't had insulin in two months; two women who lived with their uncle in a rented home where the stench of chickens and chicken offal was "overwhelming;" and a 75-year-old woman who lived with her "incontinent, out-of-it" 99-year-old mother .

Deciding this was "a major crisis," Zelon left Iraq for Israel (making the dangerous journey back to Amman first) to consult with the Jewish Agency.

"We decided it didn't make sense to rebuild the Iraqi Jewish community," she explains. Instead the Jewish Agency hired someone to go back to Iraq with her and "encourage the most vulnerable Jews (the elderly and mentally unbalanced) to leave for Israel."

One of those vulnerable Jews was Sasson, a 90-year-old man who had lived in a 12-by-12-foot room in the shelter with no bathroom or running water for 19 years.

On her return trip to Iraq, Zelon offered to take Sasson to Israel "for a better life." But the old man demurred, saying his heart was growing weaker every day and he couldn't survive the trip. When Zelon saw him again two days later, Sasson had spiked a fever. She arranged for a doctor to come who treated him with fluids and antibiotics; meanwhile she and the Jewish Agency representative stayed in Sasson's stifling room fanning him and applying cold compresses.

When they returned a few days later, Sasson's fever had broken and he told them, "I'll go to Israel with you. I need to be taken care of."

In Basra ( requiring a dangerous, six-hour car journey from Baghdad) Zelon met Salima, a poor, sick old woman who was being looked after, in a fashion, by a Syrian Orthodox priest and his wife. Salima lived in "a falling down home with no running water, pigeon droppings everywhere, and a courtyard filled with debris."

When Zelon told her, "I'm here to take you home," she said, poignantly, "I thought everyone had forgotten about me." Her sister, nieces and nephews live in Israel, she added, and her dream is to join them.

Six days later, Zelon escorted six Iraqi Jews to a waiting plane, the first direct flight from Iraq to Israel in 35 years. The new immigrants were ages 99, 90, 83, 79, 75, and 47 respectively, with the last a psychiatric patient.

In late October, three more Jews left, two of them going to London. Another three have died.

While doing her work, Zelon often faced life-threatening situations. One day, for example, while she was in the Baghdad shopping district and her driver had run into a shop to purchase something, eight Iraqis with guns surrounded her car.

"I held my bulletproof vest up to the window, the shopkeeper saw us and sent someone over," she says. Only then did the gunmen melt away into the crowd.

To date, Zelon relates, 23 of the 35 Jews on her list still remain in Iraq. Only 16 of them would consider leaving, but eight of these, she adds, are either too frail or psychologically unbalanced to move. Of the other eight, she says, "I promised them if they wish, I will get them out."

Getting out seems to be a subspecialty of Zelon's. On Sept. 11. 2001, she was at the World Trade Center shopping at the Banana Republic at 8:41 a.m. The first plane hit five minutes after she left the shop; while she was heading to the subway, the second plane hit.

In the panicked evacuation that followed, "people ran over me and I was trampled and injured," she relates. Then someone tripped over her fallen body and soon there was a pileup of bodies so that others fleeing had to move around them. That human pileup, she says, saved her life.

One way to look at it is that her life was spared so that she could save others. But Zelon offers a more generous and encompassing perspective. "We value Jewish life in a way I've never seen other communities value or care for their own," she says. "We go to any lengths to be there and save another Jew... I have one little piece of the job, but each of us (by raising the money or giving of our time) is part of the whole."

This story has been posted in the following forums: : Headlines; Iraq; Jewish Issues