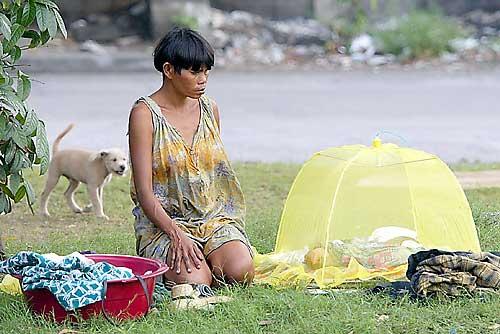 Caption:
A homeless mother tends to her baby inside a mosquito net along a Manila street in the Philippines.
Many travelers don't realize they're at risk. BULLIT MARQUEZ / AP


LIVINGSTONE, Zambia — For half a century, visitors to Africa's majestic game parks and famed Victoria Falls in Livingstone, Zambia, had little to fear from mosquitoes.

Malaria, the main health risk that the pesky biters pose, could be prevented and treated by a cheap and effective drug called chloroquine.

But now that success has come back to haunt health officials.

Heavy use of the drug over time has led the germ that causes malaria to evolve and develop mutations that make it resistant to treatment. Meanwhile, many countries slacked off on mosquito control.

Now there are lots of mosquitoes and a deadlier germ. And a once-conquered disease has roared back to become one of the world's biggest killers.

In Africa, it is second only to AIDS and kills a child every 30 seconds.

Many African countries use older malarial medicines despite their diminished effectiveness because of the costs of new ones.

Malaria's comeback is a problem not just for the countries and continents where it occurs, but also for anyone traveling to them.

American troops and tourists increasingly are coming down with the disease.

A recent study documented some disturbing trends: symptoms developing as long as 4-1/2 years after travel and in people who had taken newer drugs to prevent malaria but got sick anyway.

"The classic one I see is people going to the Yucatan peninsula in Mexico. They have no idea they are going to a malarial region," said G. Richard Olds, chairman of medicine at the Medical College of Wisconsin and a doctor at the travel medicine center at Milwaukee's Froedtert Memorial Lutheran Hospital.

People are fine in Cancún, but a side trip to see Mayan ruins takes them to an area where they need to think about preventing malaria, Olds said.

Malaria occurs in roughly half of the world, including virtually the entire Southern Hemisphere except for Australia and Antarctica. About 40 percent of the Earth's population lives in regions of high risk of the disease.

Four species of the germ are known to infect humans, but the most deadly is Plasmodium falciparum. More than 90 percent of infections in sub-Saharan Africa are this type.

There is no vaccine. However, people who have been infected many times can develop partial immunity.

Every year, about 25,000 people who travel from developed countries to malarial regions get the disease and about 150 die, two doctors from the National Institutes of Health wrote in an article last fall in the New England Journal of Medicine.

In the United States, about 1,400 cases are reported each year, but many more go unrecognized and unreported.

Travelers often forget about malaria once they get home and have been well for some time, and doctors often don't think of it as a possibility because it doesn't naturally occur in this country.

"These numbers are growing because of increased international travel, an increased risk of transmission in areas where malaria control has faded, and the spread of drug-resistant strains," the doctors wrote.

But they're also growing because of problems with malaria-prevention drugs and how people take them, doctors from Israel and from Emory University in Atlanta reported in the same journal.

Some malaria drugs only protect against one stage of infection, when parasites are released into the bloodstream and invade red blood cells, causing symptoms.

Only two drugs appear to work against an earlier phase of illness, when the germ multiplies in the liver.

Two species of the germ have long liver stages that can cause a relapse months to years later, when the patient has long forgotten about malaria risk.

It might seem simple to say that everyone should just get one of these two drugs, but it's not that easy.

Cost, side effects and ease of use all affect what patients are given and are willing to take.

Pregnant women and children can't take some malaria drugs. Some haven't been used long enough to reveal much about their safety and effectiveness.

For years the main choices have been mefloquine (Lariam) or doxycycline. But the former can cause vivid dreams and has other central-nervous-system effects, and the latter can cause gastrointestinal problems.

Malarone and primaquine are newer drugs that work against both stages of the parasite. Several studies show Malarone prevents more than 90 percent of P. falciparum malarial infections and nearly that much of another common strain. But they're newer and more expensive, and not all insurers cover them.

In any case, travelers are advised to continue taking malaria drugs for a week or two after they return, depending on the drug. But many stop once they get home, thinking they're fine.

In Africa and other parts of the world where malaria is common, constant drug treatment isn't possible given the expense of the newer drugs.

So doctors at the Centers for Disease Control and Prevention are trying a different approach — bed nets pretreated with insecticide.

The nets protect children and pregnant women during the night and early morning, when malaria-carrying mosquitoes are most likely to bite.

The CDC started experimenting with these nets five years ago in African villages and showed they lowered deaths from malaria by as much as 30 percent — a big contribution from a $3 net that lasts for a year.

"It's a really cheap intervention but it has dramatic impact," said CDC director Julie Gerberding.

The Global Fund to Fight AIDS, TB and Malaria, an international effort that has private and public donors, is looking at bed nets and other tools to beat back malaria.

"My hunch is we're going to move big time into pretreated net use," said the fund's executive director, Richard Feachem.

But for now, they're only available in limited sites where studies have been done, and more money and effort are needed to expand their use, he said.

As for treatment, new research shows that adding artemisinin, a wormwood extract used in Chinese herbal medicines, to other anti-malarial drugs can greatly boost their effectiveness.

One thing that most everyone seems to agree on is that more options are needed for treating and preventing the disease.

This story has been posted in the following forums: : Headlines; Lariam; Safety and Security of Volunteers; Malaria