In a commencement address at historically black Southern University at New Orleans, the decorated Vietnam veteran, who came back to the United States an anti-war activist, rejected "the cynicism that says you can't make a difference."

"In the last days we've all seen photos of horrific abuses in an Iraqi prison that do a disservice to the courageous efforts of over 100,000 American soldiers," Kerry said in remarks prepared for delivery. "Those abuses have done enormous damage to our country."

The four-term senator from Massachusetts, who voted for the Iraq war but against $87 billion for operations there and in Afghanistan, said the U.S. soldiers' treatment of Iraqis at Abu Ghraib prison had harmed American objectives and empowered those who find fault with the United States. 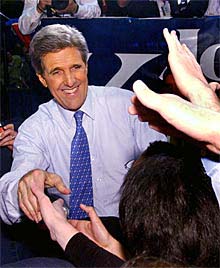 "It requires us to work even harder to present who we really are, and if you choose to, you can help to do that," Kerry said. "The Peace Corps is the most powerful symbol of non-military service in our history."

The presumptive Democratic nominee and Republican President Bush have both called for expanding the Peace Corps, an enduring legacy of another senator from Massachusetts, former President John Kennedy.

In his 2005 budget, Bush asked Congress for $401 million for the Peace Corps, versus its current $300 million.

More than 7,000 Americans now serve in the Peace Corps, according to its Web Site. They work in 71 countries in projects related to agriculture, health, information technology, business development, the environment, and education.

"If there was ever a time when everyday people in the most deprived countries, cities and villages of the world need to see idealistic Americans working to help them, it is today, when we are engaged in a struggle to win the hearts and minds of people everywhere," Kerry said.

The uproar that has followed the release of photographs of U.S. soldiers humiliating naked Iraqi prisoners required Americans to work even harder "to present who we really are," he told the graduates.

Kerry has called for Secretary of Defense Donald Rumsfeld to resign and for Bush, as commander in chief, to demand accountability and take full responsibility.

Peace Corps could really help if Peace Corps would open up the UNV/UNDP programs and allow volunteers to work with the United Nations(last year there were only 10-15 PCVs in these programs). This would create a more effective and expanded Peace Corps.

The UN decides how many Americans it wants to recruit as UNVs and staff, then PC which administers the American recruiting program on behalf of UNV responds accordingly -- albeit within a budget framework. The UN attempts to maintain a balance of all member nationalities represented on its staff and in UNV.

The UN decides alot of things and maybe they need to be asked if they would set up new and more effective programs, without the PC budget issue, which would expand the number of American volunteers at the UN/UNDP/UNV.

We always ask the UN for stuff after we pay them off. Why not expand these programs?

The other alternative (if we cannot bribe the UN throught the usual donation channels)would be to remove PC from the recruitment process. A new agency could monopolize the UN/UNV/UNDP work(within a budget)or we could totally seperate the UN/UNV/UNDP from the Peace Corps. PC seems to ineffective in this area with very few excuses.

Why do you think that PC, as the administrating agency, is ineffective? If they're not recruiting and placing the number that congress has appropriated, then I would agree. Otherwise, I don't think you understand the process or who to influence to expand the program. For example, talk to your representative about expanding the US contribution to UNV - including substantive ideas and support.

Also, Americans can become UNVs without US sponsorship by securing a local sponsor in the country of choice and then applying to that country's UNV office. They can also try to secure sponsorship from another UN member country, with assistance and interest from the local UNV office. For example, the American applicant could appraoch a Japanese funded project and propose a role in the program being sponsored by Japan.

The UN would recruit however many volunteers we would like to send. The contribution to UNV would be reflected in the sponsorship of Americans at the UNV/UNDP.

Congress does not want to sponsor PCVs at the UNV/UNDP? I think most would.

Lastly, UNVs that do not have PC sponsorship/clearance(recruitment is done by the UN)or go through another country tend to have problems. PC has a monopoly here and is wasting valuable opportunity.

Are you suggesting that PC is somehow impeding the clearance and placement process? UNV qualifications are different than those for PCVs. UNVs are usually specialists with experience, whereas the vast majority of PCVs are generalists. You'd need to first evaluate the applicant pool for qualifications ... Perhaps the UN could do a better job of recruiting qualified applicants, which would in turn increase the number and proportion of applicants accepted.

Nobody is suggesting that congress doens't have an interest in sponsoring/funding American UNVs. However, I doubt many actually understand the program, and perhaps with education and advocacy they would be more active in funding sponsorship. The sponsoring country pays for its UNVs, therefore, specifically earmarking budgets for UNV placements would be important.

On your last point ... Perhaps, but I've known more than a few Americans who became UNVs via third country sponsorship and did quite well.

Quite frankly, it isn't likley that PC would actively canabalize its own pool of specialist candidates to serve as UNVs. On the other hand, RPCVs often make excellent UNVs.

If you would like more information you can e-mail me at verrecal@yahoo.com. NO threatening e-mails please. I got two threats last time I gave the e-mail out.

As far as education and specialization at the UN. This is how they discriminate against employement. PC is targeting Community College students for PC. This program would would work very well at the UN.