The Presidential Elections and Returned Volunteers 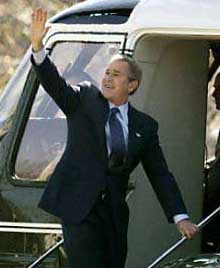 I think President Bush understands the role of the Peace Corps and believes that by increasing the numbers of volunteers, stability can be found throughout the troubled countries. I also believe that if President Bush says he will do what he can to increase funding, he will. Kerry on the other hand, just talks to talk!!

No amount of funding or support for Peace Corps can counter the tremendous harm of Bush's foreign policies which run exactly against the "spirit and mission of the Peace Corps". From the Middle East to Central Asia to southeast Asia to South America to the Carribean to Africa, it would take hours to list all of the places and ways in which the Bush administration is pushing policies that makes America and Americans more hated every day.

While it is difficult to define exactly what the "spirit and mission of the Peace Corps" is, I cast my vote for Bush because under Kerry, absent huge increases in taxes, funding for projects like the Peace Corps will be sacrificed for other well-meaning, but questionable social programs. Bush recognizes the successes and benefits of the Peace Corps and will continue to support funding. Kerry will take a "shotgun" approach to social program spending and the result will be either astronomical taxes for returning PCV's or a reduced Peace Corps budget. Gary Admire, Peace Corps Volunteer, Panama 1964-1966

Here's some cynicism for you...I would like to ask a simple question (maybe two)of the individual who posted letter from SFC Reynolds..1) May I be directed to the source of whereby these numbers came? 2) May I ask Special First Class Reynolds, how he had the time to come about these numbers when he is out protecting Iraqis. (Admittedly, I am assuming SFC does not sit behind a desk all day). I would appreciate the source whereby these numbers came. I agree with you about the biased media. Pictures do tell stories. Bush...hum.

Maybe if you read the posting again you would see that SFC Reynolds was going back to IRAQ, meaning he is in the US, not at the moment protecting Iraqis as you suggest. I dunno, maybe the Army doesnt make him work 24/7 ya think?

My experience is that with the Democrats intention is fait accompli. With the Republicans they do. It may be wrong but at least when they do something. There are no fence sitters. With them either you love them or you hate them. It seems also that the democrats like to talk about funding the Peace Corps but the Republicans actually do it.
John Lemon
Niger 1978-80
SMSgt, USAFR (Ret)

Actually Bush has a long accumulating history of nice expansive talk, without funding. As they say, "all hat, no cattle" or "smoke and mirrors."

His speach writers play well to the day's audience. But if it doesn't directly benefit his supporters, it likely won't happen.

Check out his support for Peace Corps for only one example. Education, Fish, Medical research, Health care, Prescription drugs, are other bad examples.

An RPCV(s) got alot of money from AID(and jobs) to create Mercy Corps and alot of people consider PC paid off. Bush also wants to double the size of PC, this means more money for the employees and, perhaps, no five year rule on employment. If you work for PC and you don't like Bush you have to be an example a bad speech writer!

Oh, sure more money for the employees ... What do you think, each employee or even a select few receive a bonus from increased appropriations? Any increase in appropiations as approved by congress go to support improved safety and security, an increase in volunteer numbers and ultimately the benefiting countries, etc.

Do you dispense brief, unsubstantiated accusations simply for fun or do you actually have a point?