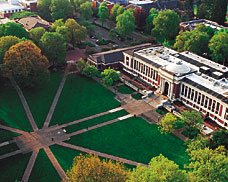 On June 11, Oregon State's Peace Corps Representative Office will be closing for an indefinite amount of time.

OSU is one of seven universities in the Northwest that has an on-site representative.

The funding required for these positions is part of the overall Peace Corps budget that must be approved by Congress.

"We did not get our budget from Congress this year in the amount that we asked for. We were given less than what it takes to pay seven campus representatives," said Jim Aguirre, the public affairs specialist for Peace Corps Seattle regional office.

"We had to reduce the numbers by one. We looked at all the factors, and OSU seemed to be the most likely one that we could augment with a recruiter," Aguirre said.

The Seattle office is one of 11 regional recruiting offices around the country, and is responsible for sending recruiters to universities in Montana, Alaska, Washington, Oregon and Idaho.

When it became obvious that a campus representative would have to be cut, deciding factors included looking at the number of visits recruiters from the Seattle office made to each university, as well as the number of volunteers coming out of each school.

The final decision was made about three weeks ago, according to Aguirre.

"OSU was on the lower end of production numbers when looking at their standing amongst the other (schools)," Aguirre said.

Aguirre wanted to make it clear, however, that the Peace Corps will still be active in Corvallis.

"This is in no way an abandonment of Oregon State, just a change in the way we do business," he said.

"There will be a Peace Corps recruiter coming down periodically, so Peace Corps will still be here -- it's just that this office unit won't be open," said Roman, who is also a graduate student at OSU.

During his year as campus representative, Roman has interviewed approximately 20 individuals interested in volunteering, and his fellow recruiter from Seattle has matched that number.

Roman will continue to conduct interviews through June 11, and will then return as a volunteer to the Republic of Kiribati, where he originally served as a member of Peace Corps.

"We've done so much on campus, and campus has been extremely welcoming," he said. "I've had a really good experience at OSU, hopefully the office will open again if we have the money."

Katie Gill is the international affairs editor for The Daily Barometer. She can be reached at baro.news@studentmedia.orst.edu or 737-6376.

This story has been posted in the following forums: : Headlines; Budget Cuts

Seems awfully odd that PC budget increased $30 million, which led to a big push for recruitment, but now there's a budget crunch. Placement is cutting programs, recruitment is being told there's no funding. Post has to do more with less. I've also heard that Director Vasquez enjoys traveling luxuriously and often.

Do I hear another Orange County money mismanagement scandal for the embattled director?

Anyone check out Volunteers for Prosperity, Bush's international volunteer program? Look at volunteersforprosperity.gov, it's almost indiscernible from Peace Corps in the type of applicant it would attract. We need to wake up here people.

There's only one person the Bush Administration hates more than FDR, and that's JFK.

Just a bit more to add, and then enough rambling. The Bush Administration's practice of doublespeak is atrocious. On the one hand they publicly call for a doubling of Peace Corps, and then let it die in Congress. What happened to the billions of dollars for the HIV/AIDs initiatives, dead. P.R. sound byte sedatives for the masses.

The best way to see what the administration is looking to hack next is what they claim to promote.