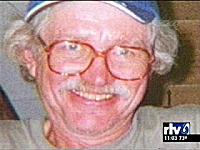 Jackie Luncford, the manager of Hart's apartment complex, found his body in the apartment, RTV6's Jeremy Brilliant reported. Luncford said she went to check on Hart when he failed to answer his telephone.

"We've been telling him for 10 years, 'Watch what you're doing. Stay in after dark,'" Luncford said.

Police have no suspects in the case, but they do have a theory about what may have happened, Brilliant reported.

"He may have befriended someone that he didn't actually know that well, and, for whatever reason, something happened and he ended up being killed," Indianapolis police Detective Robert Flack said.

The victim's brother, Ray Hart, described him as a caring person who served in the Peace Corps in the 1960s. George Hart (pictured, right) previously taught Spanish and Portuguese at Ohio State University and Indiana University, but had been on disability, Brilliant reported.

"I'd like to see the person or persons who did it arrested and brought to justice, and I hope they get what they deserve," Ray Hart said.

Police said that even minor details could lead to the killer. Police are asking anyone with information about Hart's whereabouts in the days and hours before his death to call Crimestoppers at 262-TIPS.

Copyright 2004 by TheIndyChannel.com All rights reserved. This material may not be published, broadcast, rewritten or redistributed.

This story has been posted in the following forums: : Headlines; Crime; Obituaries