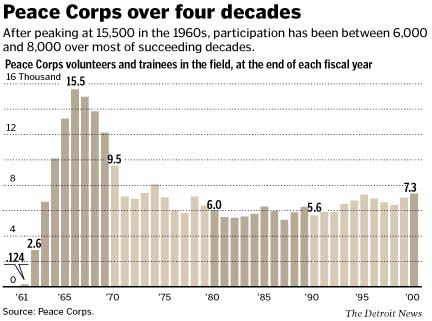 AmeriCorps member Demica Smith plays with Caitlin Ketelson, 4, while volunteering during a dance at the VFW hall in Pontiac. President Bush hopes to add 25,000 AmeriCorps volunteers.

WASHINGTON -- When Matt Hildebrandt graduated from the University of Michigan a couple of years ago, his friends were talking about salaries, benefits and 401(k) matches while he was headed to a poor country in West Africa to join the Peace Corps.

Now that he's been back a few weeks from Benin, the 24-year-old thinks the economic downturn, coupled with the events of Sept. 11, might give some disenfranchised Generation X-ers "something to rally behind."

"During the economic boom, especially with our generation, it didn't take as much energy or effort to get a job, make good money and go with it," Hildebrandt said. "I can tell you, it's difficult to find a job right now. I have friends who are unemployed and some who have been laid off."

The combination of a weak economy, heightened patriotic fervor since the terrorist attacks and the strong push by the White House for people to give generously of their time might lead to a rare surge in volunteer levels in the United States, experts say.

In his State of the Union address, President Bush asked Americans to pitch in two years of their life, or 4,000 hours, in community service. He wants to double the number of Peace Corps volunteers to return to its historic high of 15,000 volunteers in the mid-60s, and add 25,000 new AmeriCorps volunteers and 100,000 new Senior Corps participants.

The new element of his initiative is to create a Citizen Corps that would concentrate on homeland security with focuses on a Medical Reserve Corps, a Volunteers in Police Service program and a new terrorist information system, while doubling existing Neighborhood Watch programs.

"The current revival could be something akin to what we saw in the '60s with the start of the Peace Corps, VISTA and Foster Grandparents," said Jim Perry, a professor of philanthropic studies at Indiana University-Purdue University at Indianapolis.

"We abandoned the idea of national service for the better part of two generations. The Vietnam War and the cynicism of Watergate were exactly contrary to the expectations of community service and commitment to one's fellow citizen. We were alienated from that idea for a long time, and certainly President Reagan didn't believe that was a function of government."

By contrast, Clinton's AmeriCorps drew 26,783 volunteers its first year -- far more than the Peace Corps ever attracted. For the current year and the past two years, AmeriCorps volunteers were estimated at 50,000 each year.

"If you look at President Bush's State of the Union address, and his actions during the last year with faith-based and community initiatives, this is a much different perspective on the role of government in supporting the health of civic society, the nonprofit sector and volunteerism than was evident in his father's administration," Perry said.

Although many Republicans are standing behind Bush's call now, they didn't always embrace Clinton's AmeriCorps program. Rep. Peter Hoekstra, R-Holland, who chairs a congressional subcommittee with oversight over the program, is best remembered not for voting for the program but for taking it to task for shoddy bookkeeping.

"It became, rather than a model for a new government agency, which is what Bill Clinton promised us, another example of wasteful inefficient bureaucracy," Hoekstra said.

Others think the government shouldn't be pushing volunteer work.

"This is what every dictator in history has said, put the nation in front of your own self interest," said Yaron Brook, executive director of the Ayn Rand Institute. "This country wasn't founded on duty to state, but duty to self."

"People who are motivated to join the Peace Corps respect other cultures and find them interesting," said Mark C. Holter, 41, assistant professor at the University of Michigan School of Social Work, who served in Mali, West Africa.

"I don't know if that translates into a complete change in the gestalt of how a country feels about Americans, but it certainly has an impact on the individuals with whom the Peace Corps volunteer creates relationships."

Some activists also worry that Bush's call to volunteer might politicize the movement.

"It could lead to endangerment of lives of people in the field," said Tom Napolitano, 57, of Livonia, who served in the Peace Corps in Malaysia from 1966-68.

Regardless, Bush definitely has sparked some interest in volunteerism already.

Internet applications are up considerably at the Peace Corps since last week, said spokeswoman Ellen Field, who agreed that economic downturns do help the cause.

The Peace Corps conducted a narrow media campaign last year targeted at people caught up in the technology crash -- the slogan was "dot-com dot-gone" -- and saw a surge in applicants from Silicon Valley.

In Michigan, about 50 percent of residents report doing some volunteer work, a figure that hasn't fluctuated much during the four years the statewide survey was conducted, said Kyle Caldwell, executive director of the Michigan Community Service Commission, which administers AmeriCorps.

The lowest volunteer levels are among people in their 30s, an age when many have young families. Caldwell said younger adults aren't disenfranchised, but "they don't want to be candy stripers at the hospital."

The terrorist attacks prompted a spike in giving and volunteering, studies have shown.

"In the aftermath of September's tragedy, a window of opportunity has opened for a sort of civic renewal that occurs only once or twice a century," Robert D. Putnam, professor of public policy at Harvard University, wrote in this month's issue of American Prospect.

Whether that level of interest will wane or remain high is being closely watched by the civic community and the White House, which is banking on its continuity.

"Whatever amount of time they can commit to, we would be happy to have their assistance," said Mary Ann Redhage, spokeswoman for the Southeastern Michigan chapter of the American Red Cross, which got more than 1,000 calls from new people wanting to volunteer after Sept. 11.

"Even one hour a month, a couple hours, really adds up."

Jay Thomas, 54, who served in Iran and Madagascar for the Peace Corps and now lives in West Bloomfield, said people needn't be dissuaded if they can't take time to serve overseas.

"There are 10,000 ways to volunteer," he said. "You can read in school ... adopt a kid after school, baby-sit for working mothers, do after-school care through your church, writing letters ... You don't even have to get out of your house or leave your computer."

This story has been posted in the following forums: : Headlines; Expansion; Terrorism; Service

The Town Hall is right down the street. Peace Corps is worldwide and has a very long recruitment and selection process. Comparing these domestic programs with Peace Corps does not make sense.