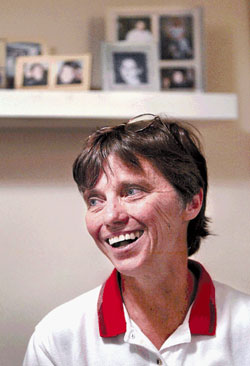 By Stephanie M.Mangino
The Winchester Star

Zelda Uttal slipped on a red and white AIDS Response Effort polo shirt before she was ready to talk. Though she has left the group that defined a decade of her life, she still has some things to say.

Uttal, 55, ended her tenure with the organization on May 3; it began on Valentine’s Day 1994. For the past two years, she served as the executive director of the group that provides emotional and financial support to people with HIV and AIDS.

“She was willing to step forward and put herself on the line for this cause at a time when a lot of people did not want to hear it,” said Brian Bayliss, chairman of ARE’s board.

Uttal had the enthusiasm and commitment to tackle things “most people don’t want to acknowledge,” he said.

She also “epitomized the spirit that allows a grassroots organization like [this] to take hold,” he said.

When Uttal started part-time as the group’s first educator, ARE had a $32,000 budget and worked out of a small space in Winchester’s Christ Episcopal Church.

ARE has grown. But so has the epidemic.

The group served 18 people when Uttal arrived; it serves 80 now.

But the death rate here seems to be slowing. Uttal attended a dozen funerals that first year; she went to two last year.

Better medication for those with HIV/AIDS, as well as improved education and testing among those who are high-risk for the disease have brought death rates down, she said.

But work remains. The area’s youth learn about AIDS in school, but people who started to hear of the disease in the 1980s still need to realize AIDS can happen to anyone, Uttal said.

It’s a lesson Uttal learned in the early 1980s, when a friend from her 1981-1983 African service in the Peace Corps was diagnosed with AIDS.

He told Uttal about the infection in 1984 and died the following year, she said.

Times are changing, and ARE has made a difference. Most of today’s students don’t attach stereotypes to people with AIDS, Uttal said.

“They want to care. They want to do something for somebody that’s struggling with this disease,” Uttal said.

But others still find it difficult to talk about sex and drug use, two primary ways to transmit the HIV virus.

Uttal’s dream is to see the stigma attached to the disease disappear.

“No matter what, she had that commitment, that compassion for clients,” Tinkham said.

Uttal also was a highly effective and memorable spokesperson for AIDS education, Tinkham said. Tinkham, who joined ARE in 2001, remembered Uttal from a presentation that took place six or seven years earlier.

Sometimes, when the organization holds an awareness event or HIV testing, people who saw Uttal give a talk remember her, and ask how she is, Tinkham said.

But it is time for someone else to lead the organization, Uttal said. With ARE strong, “It’s a good time to move on,” she said.

Uttal is keeping her options open, and is considering traveling overseas again, possibly through the Peace Corps’ Crisis Corps program.

She may work in the HIV/AIDS education field, she said. But then she hears a voice inside that says, “‘Let’s start something totally different.’”

The Ohio-born Uttal has always been willing to delve into different careers. She has worked with the elderly and did a second stint in Africa with her husband in the mid-to-late 1980s.

But even as she closes the AIDS Response Effort chapter of her life, some pieces of an epilogue remain.

She misses the clients already, and Uttal, a woman with a bright smile and infectiously positive outlook, nearly cried as she looked at red AIDS awareness ribbons worn throughout her career.

“If she’s not here in person, she’s here in spirit,” Tinkham said.