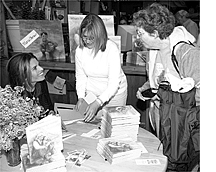 Droves of curious fans waited patiently outside Ketchum’s Chapter One Bookstore Saturday for their chance to meet Maria Shriver, the First Lady of California and former NBC News correspondent. Inside the Main Street store, Shriver signed her newest release "What’s Happening to Grandpa?"

The turnout at the event was impressive with Shriver estimating that she signed "a couple of hundred books an hour."

Shriver wrote "What’s Happening to Grandpa?" for families dealing with Alzheimer’s disease. She said the book is geared "to everybody, because basically we are all kids."

"I hope people find it helpful for themselves and it helps their families," Shriver said of the book.

Changes in her own family provided direction for the story. Last year Shriver’s father, Sargent Shriver, was diagnosed with Alzheimer’s disease.

In addition to "What’s Happening to Grandpa?" Shriver has written, "What’s Wrong with Timmy?," "What’s Heaven?" and "Ten Things I Wish I’d Known Before I Went Out into the Real World."

Shriver signed a total of 550 books, including 50 copies each of her three previous books, said Cheryl Welch, co-owner of Chapter One.

Also featured on the table was a new biography of Shirver’s father, Sergeant Shriver, called "Sarge" by Scott Stossell.

Shriver was the first director of the Peace Corps, headed the War on Poverty for President Lyndon Johnson, which led to the eventual creations of VISTA and Head Start, was Ambassador to France from 1968 to 1970, and in 1968, with his wife Eunice Kennedy Shriver, started the Special Olympics.