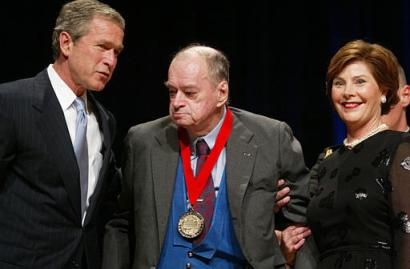 Caption: Historian and writer William Manchester is seen with President Bush and first lady Laura Bush during the National Endowments of the Arts Awards ceremony in this April 22, 2002, photo in Washington. Manchester, author of popular biographies on Winston Churchill and Douglas MacArthur and the controversial chronicler of President Kennedy's assassination, has died, a spokesman at Wesleyan University said Tuesday, June 1, 2004. He was 82. (AP Photo/Pablo Martinez Monsivais, File)

HARTFORD, Conn. -- William Manchester, author of popular biographies on Winston Churchill and Douglas MacArthur and the controversial chronicler of President Kennedy's assassination, died Tuesday. He was 82.

Manchester, who had recently suffered two strokes, died at his Middletown home, said Bill Holder, a spokesman at Wesleyan University, where Manchester was a professor emeritus.

Poor health had kept him from completing the third volume of his best-selling Churchill series, "The Last Lion, Volume III." Paul Reid, a feature writer at The Palm Beach Post, was chosen last month to help finish the book.

Manchester emerged from a working-class childhood in industrial Massachusetts and battlefield experiences as a Marine Corps sergeant in World War II to write about 20th century giants such as Kennedy, Churchill, MacArthur and the Rockefellers.

Although known as an accomplished, readable biographer, historian and author of more than a dozen books, Manchester probably was best known for his relationship with the Kennedys.

Manchester and JFK became friends in 1946 while both were recovering from debilitating war wounds. During the 1950s and the "Camelot" years, Manchester was a confidant and companion to Kennedy, and a frequent visitor to the family's compound in Hyannisport, Mass.

The friendship helped provide Manchester with material for his breakthrough book - the 1962 "Portrait of a President," the first of three he wrote about the late president. The shattering experience of the Kennedy assassination the following year and an exhaustive, controversial investigation led to "The Death of a President," published in 1967.

Explaining the Kennedy mystique in "The Death of a President," Manchester wrote: "The nub of the matter was that Kennedy had met the emotional needs of his people. His achievements had been genuine. His dreams and his oratory had electrified a country grown stale and listless and a world drifting helplessly toward Armageddon."

In a 1999 New York Times interview, he said he thought so many people believed Kennedy was killed in a conspiracy because of "that dreadful Oliver Stone movie" ("JFK") and because people felt someone as insignificant as Lee Harvey Oswald couldn't have done such a momentous thing.

"If you put the murder of the president of the United States at one end of the scale, and you put that waif Oswald on the other end, it just doesn't balance," he said. "And you want to put something on Oswald's side to make it balance. A conspiracy would do that beautifully. Unfortunately, there is no evidence whatever of that."

In 1983, 20 years after the assassination, he wrote "One Brief Shining Moment," an affectionate retrospective of the Kennedy years.

After his 1968 "Arms of Krupp" - which related the history of the German arms-maker - and his history of the United States from 1933-1973, "The Glory and the Dream," Manchester took on other major historical figures.

Despite mixed reviews, the Churchill books sold hundreds of thousands of copies. They were so beloved that when the U.S. Navy commissioned a guided-missile destroyer named after Churchill it installed signed copies of Manchester's books in the ship's library.

The most personal of his works was an attempt to exorcise demons and recurring wartime nightmares - "Goodbye, Darkness," published in 1980. Manchester describes growing up in Attleboro, Mass., as the son of a wounded World War I Marine and then following in his father's footsteps by enlisting at the beginning of World War II.

The book relates Manchester's wartime experiences on Okinawa, where he was wounded twice, and his visits to other Pacific battlegrounds during the late 1970s.

In his concluding author's note to the book, Manchester wrote: "This, then, was the life I knew, where death sought me, during which I was transformed from a cheeky youth to a troubled man who, for over 30 years, repressed what he could not bear to remember."

Born April 1, 1922, Manchester served in the Marines from 1942-45, receiving the Purple Heart. After the war, he completed a bachelor of arts degree at the University of Massachusetts in 1946 and a master's from the University of Missouri in 1947.

He was a reporter for the Daily Oklahoman in Oklahoma City and for The (Baltimore) Sun, where he was a foreign war correspondent. During his years as a journalist, he began writing books. The first, the relatively obscure "Disturber of the Peace," came out in 1951.

Manchester left daily journalism in 1955, the year he began his long association with Wesleyan University. He became managing editor of publications there, a job he held for 10 years. He was a fellow at the Wesleyan Center for Advanced Studies in 1959-60 and a faculty member in 1968-69. He recently was adjunct professor of history and writer-in-residence.

In explaining his decision to stop writing, Manchester told The New York Times in 2001 he could no longer sustain, or even approach, an output so prolific that he would write "all day, all night."

"I can't put things together; I can't make the connections," he said.

This story has been posted in the following forums: : Headlines; History; Legacy