Terrorists may be a growing threat, and we may be unprepared to deal with the challenges they pose, but they have no hope of destroying our society. Only we can do that 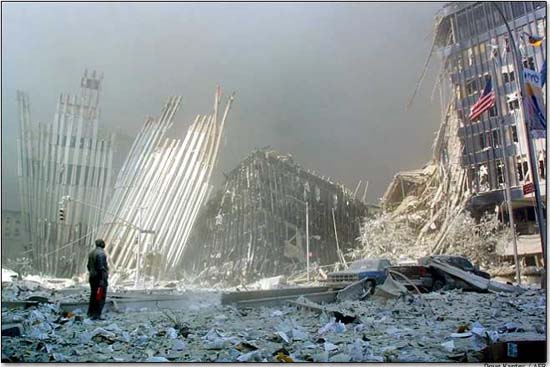 Terrorists may be a growing threat, and we may be unprepared to deal with the challenges they pose, but they have no hope of destroying our society. Only we can do that

Kerry: a Lighter Shade of Bush

They did not explicitly endorse Kerry, but the old warriors and insiders find themselves far more comfortable with the Massachusetts senator than with Bush when it comes to their favorite subject. Not only has Kerry firmly surrounded himself with Clinton standard-bearers on foreign policy and defense, but he has espoused his own brand of warmongering.

I would love nothing better than to see Bush out of office, but Kerry is a gloomy alternative. Worse yet, in the short term, his "me too, only better" approach to the war on terrorism could actually serve to make the United States less safe.

Kerry's defense plans might be a slam-dunk for the atherosclerotic set in the national security community, but here is the alternative that the senator offers to Democrats and people of liberal values in November:

• no plan to withdraw from Iraq, not even the kind of "secret plan" the late President Nixon offered on Vietnam, and no change in Afghanistan;

• a larger military with many more special operations units, plus accelerated spending on "transformation," which in today's defense jargon means creation of greater capability to intervene around the world on short notice;

Kerry's defense advisors see much of this as innocuous rhetoric to protect the Democratic candidate's flanks from traditional conservative accusations of being soft on national security. At the same time, it represents a calculated strategy to "keep your head low and win."

In his stump speeches, Kerry stresses a spirited dose of alliances, the United Nations and the North Atlantic Treaty Organization, and a return to what he calls an "America that listens and leads again." He roundly criticizes the Bush administration on Iraq, Afghanistan and homeland security. He promises as commander in chief that he will never ask the troops "to fight a war without a plan to win the peace."

All that is to the good. Yet when Kerry describes the contemporary world, and the challenges that the U.S. faces, he sounds just like the president, the vice president and Defense Secretary Donald H. Rumsfeld. Terrorism, he says, "present[s] the central national security challenge of our generation." Preventing terrorists from "gaining weapons of mass murder" is his No. 1 security goal, and Kerry says he would strike first if any attack "appears imminent." The senator promises to "use military force to protect American interests anywhere in the world, whenever necessary." On May 27 in Seattle, he promised to "take the fight to the enemy on every continent" (I guess that probably doesn't include Antarctica).

Beyond rhetoric, Kerry proposes to add 40,000 troops to the Army and to double the "Special Forces capability to fight the war on terror," presumably jumping from the current 48,000 to 96,000.

On homeland security, there isn't a constituency that Kerry doesn't pander to. National Guard, local government, police, firefighters, public health services, even AmeriCorps — the modest domestic equivalent of the Peace Corps — all should be beefed up, he says, to "protect America." He even proposes a new "community defense service" of homeland security wardens à la civil defense in the Cold War, which would surely be the looniest club that ever existed.

Even his serious proposals are problematic. The homeland security plan is defeatist and out of control. On the Army, though it sounds as if adding active-duty troops would solve the current overburden in Iraq and relieve the National Guard and reserves, the reality is that adding 40,000 to the end strength would take two or more years, according to one of Kerry's own advisors. Special Forces are even more difficult and time-consuming to manufacture.

But the biggest problem is that the basic premise of military growth is that we will continue to fight at the Bush pace. And relying more on special operations? That's the Rumsfeld doctrine: fast and light, covert and unaccountable. But anyone who is not an administration toady must recognize by now that ninja magicians can do only so much and that the cost of not having enough regular soldiers on the ground is a theme that runs from Tora Bora and the postwar insurgency in Iraq to the Abu Ghraib prison scandal.

Special-ops troops tend to get you involved in, well, special operations. Making them a centerpiece of U.S. military planning and force structures builds a bias into the decision-making process that favors covert action and the unfortunate belief that we can prevail over terrorism by killing terrorists faster than they are recruited.

Kerry proposes these buildups because he accepts the central premise of the Bush administration: Terrorists are so threatening that we must sacrifice our liberties, change our government and military and, ultimately, our way of life in order to fight them.

In this 60th anniversary year of D-day, I find it astounding that anyone could be so callous and ahistorical as to point to the threat we faced from a Nazi foe that truly had the capacity to destroy our way of life and compare it to a few thousand or even a few tens of thousands of terrorists who, at their worst, can do no more than threaten to panic Western society with random bloodshed. It is equally absurd to compare the war on terrorism to the Cold War, when the United States could literally have been destroyed by thousands of nuclear weapons (a possibility, though not a threat, that persists today from Russian and Chinese nukes).

Intelligent people, and I assume that includes Kerry, must begin to challenge the basic premise behind the post-9/11 hysteria. Terrorists may be a growing threat, and we may be unprepared to deal with the challenges they pose, but they have no hope of destroying our society. Only we can do that.

By overstating the threat and overreacting to incidents, we not only give terrorists exactly what they seek, but we seem to create a panicked environment that clouds our judgment when it comes to intelligence, propels us into military adventures abroad and distorts our priorities at home.

Americans should demand a certain level of competence and accountability from their government to protect them, but the Bush (and Kerry) approach is not securing a peaceful future. In fact, the entire war on terrorism, based on the false assumption that it is a war for our survival, seems to be feeding hatred and aggravating the fault lines.

We need to rethink this problem, pure and simple, and Kerry needs to unburden himself from the conventional wisdom.

Otherwise, for many in the Islamic world, Kerry's adoption of the Bush administration's worldview and strategies merely reinforces the idea that the United States is indeed the problem, that there is a clash of civilizations that only might can resolve and that Islam will be an American target no matter who is president. If reducing terrorist attacks is the goal, I can't imagine more dangerous perceptions to foster.

The United States would be safer with a Democratic political platform that demonstrated fundamental disagreement about our current course.

It's tough in a campaign season to stop worrying about the polling booth and start thinking afresh about national security. So here is one final argument against Kerry's muscle-bound "me-too-ism," an argument rooted in domestic, not foreign, policy concerns: For young people energized by the Howard Dean campaign, for liberals and the silent majority, Kerry's carbon-copy campaign conveys the impression that political involvement doesn't matter. Whether you back Kerry, stay home, vote for Ralph Nader or stick with the Bush team, the result will be the same.

If revitalizing American democracy and reinforcing its most precious values are our key objectives, I can't imagine a worse message for a Democratic presidential candidate to be sending.

This story has been posted in the following forums: : Headlines; Speaking Out; Election2004 - Kerry